ffccbce39bd2ce1db0dab0843756cd72
For over ten years our aim has been
to make Terlingua's past come alive and touch you today
while being respectful of the living and the dead. 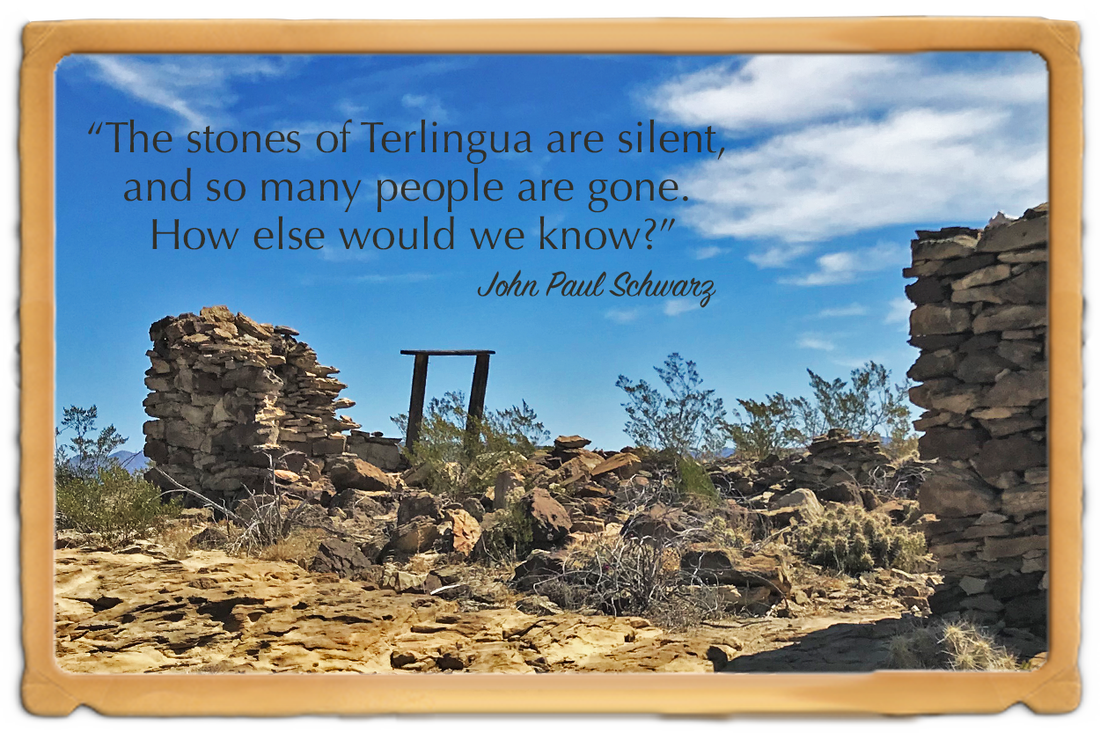 Our mission:  We collect Old Terlingua information and images of its people, places, and culture so that People today can connect with their past and "lost" or even unknown relatives.
Familias de Terlingua is dedicated to collecting the names of the people and places, along with their stories, customs, recipes, photographs, language, and music hoping to capture and share the spirit of Old Terlingua.  We want to provide opportunities for descendants to connect with their roots and through them to "new" relatives.  We want to connect them and the general public with the Terlingua culture which is getting dimmer as it recedes into the past.

Familias de Terlingua is about life in the greater Big Bend Area prior to 1946.  At the end of the war, the mines that were a key economic driver of the area died out and ghost towns were created overnight.  The Terlingua Diaspora ended the Old Terlingua days.

Our inspiration: Those who preceded us left such a nostalgic legacy of life in Old Terlingua that infected many of their children.  Over the years others also wished they could have experienced it.   Those of us who are enchanted by the magic of those times and those lives as well as those of us who are simply curious can, in a small way, get a glimpse of the very stuff that helps define who many of us are today.
Our Vision is to evoke the life that flourished in the Greater Terlingua Area before the end of World War II and preserve its memory for future generations.

Our highest value is respect.  We collect information about the people who lived in the Greater Terlingua area, and we connect the living with their roots and their "lost" relatives.
But foremost we aim to always respect the living and the dead.
Who we are:
Familias de Terlingua is owned and operated by Antonio S. Franco, managing editor. María Louisa Franco Madrid is the research editor and the major contributor to Familias de Terlingua.

Familias de Terlingua was founded by Louisa Franco Madrid and her cousin Antonio Franco on September 29, 2009. They intended to capture in the names of and photos of their Terlingua ancestors in a small free subsite at Weebly.com for their family to know their ancestors and their neighbors, so  they could pass on what life was like in the old days in Terlingua. The next day Louisa invited Bob Wirt to join us in contributing to the site.  Louisa and Bob immediately overwhelmed Antonio with so much information that on the third day it was clear it was going to be more than a small family site. So on October 1, 2009 we purchased the domain name familiasdeterlingua.com and launched Familias de Terlingua officially.  It's growth was ensured by the major contributions of many readers but especially the two "driving forces" without whom there would be no Familias de Terlingua: Louisa Madrid and Bob Wirt.

Louisa and Bob had been researching independently of each other and met at the annual reunions in Terlingua conducted by Cynta Narváez. They began to collaborate in recovering and capturing the families of Terlingua.  Each was a very good researcher, Bob looking through old records, and Louisa collecting her memories and making contacts with other with first hand knowledge of having lived in the pre-World War II days of the Terlingua area from Ojinaga, Mexico to Fort Stockton, Texas.  From Boquillas, Mexico to southeastern New Mexico.  But the collaboration between the two was complementary in skills and knowledge that was more powerful than their independent work.
- Louisa Madrid, whose dedication through many years has preserved memories, photos, and contacts that together with her participation in reunions has provided the materials and magic that drove the creation of Familias de Terlingua.  Her on-going work in research and materials acquisition is a mainstay of Familias de Terlingua.

- Bob Wirt had no family connections to Old Terlingua, but he fell under its spell while working as a volunteer for the Big Bend National Park wondering who had lived in those abandoned buildings and worked those  fields.  His years of dedication to research and his high respect and esteem for validation of information are an invaluable contribution to this site since those values affect all content on here not just that provided by him.  Bob Wirt created his own Web site with the poetic name of Life Before the Ruins which is a treasure trove of research into genealogical and other records that reveal the lives of those who lived in the area.  Bob generously made his material available to Familias de Terlingua and we are very grateful to him.  Bob passed away January 2013 but his spirit still lives in this site and his own site.
Click "About Us" button to learn about this Web Site
About Us