Please Note!
To get to the ruins will require some walking.  Make sure you have appropriate footwear.  Don't forget to bring sunblock and you will need bottles of water to stay hydrated.  And don't forget your cameras.  We can share photos afterwards.
TWO-DAY TOUR SCHEDULE
Saturday April 20, 2019 Holy Saturday

7:45 start home sites tour
tour the Dolores García/Joe Moss home -  Sandy Smith will host us;
drive to Alberto Molinar home and Molinar School ruins on Long Draw Road;
walk up to the Paz Molinar home ruins and the Molinar cemetery;
drive to  the Antonio Franco home and Aleck Smith home ruins;
The Valenzuela home may not have road access
drive to the Felix Valenzuela home and Pomposa Domínguez ruins on Willow Creek Rd.

Family Members attending: 9 confirmed
Friends of the Family attending: 7 confirmed
Four Wheel Drive Rides
as of April 16, 2019 at 9:00 AM CDT 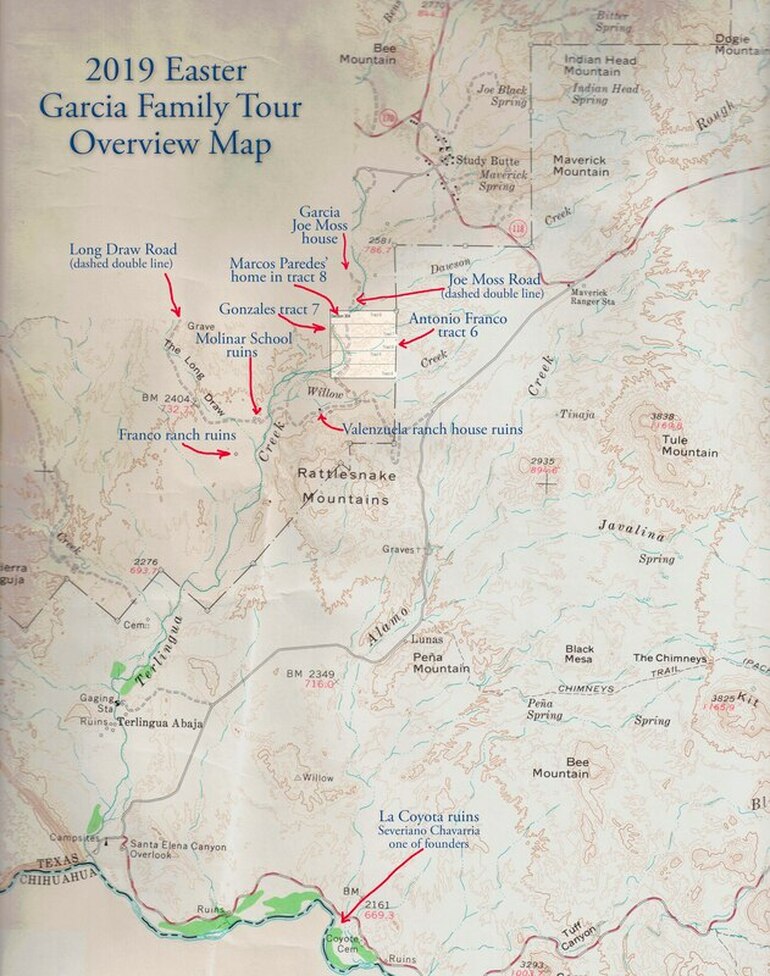 Fulcher Property
We start our tour of the family home going through the property of the Fulcher Family.

The following map which came from the Fulcher family a few years ago shows where the Fulcher land has been in relationship to the Valenzuela, Molinar, and Franco properties.
Section 302 (which is "L" shaped) is where Paz Molinar built his home overlooking Terlingua Creek.  It is part of the Fulcher land in this map.  Next to it on the southeast is Section 38.  Alberto Molinar and his cousin and best friend Antonio Franco bought this section from 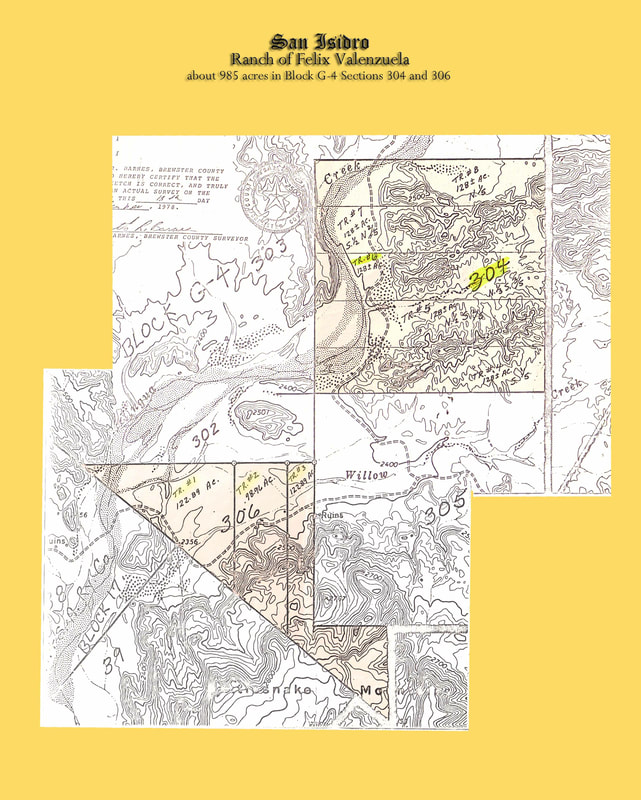 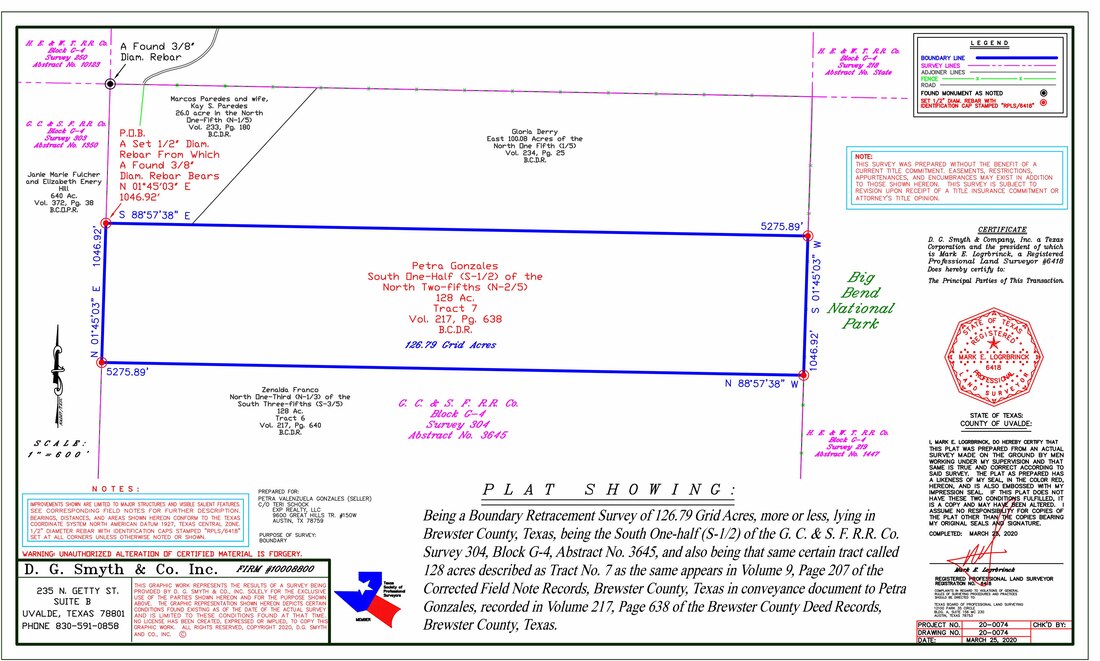 Tract 7 of Section 304 bordering Tract 8 on the north and Tract 6 along its southern boundary.
The land had originally been granted to the Gulf, Colorado amd Santa Fe Railway. "The GC&SF constructed 355 miles of track before the state law granting sixteen sections of land for each mile of track constructed was repealed. The company received certificates for 3,554,560 acres of vacant unappropriated state land and from the sale of these certificates netted $211,168.06." TSHA

"In 1873, competition between the cities of Houston and Galveston was strong, and the Galveston, Houston & Henderson Railroad (GH&H) was the only rail link between the two cities. The competition between Houston and Galveston was fed by the quarantines, which were often imposed on Galveston traffic by Houston. These quarantines occurred almost annually and were based on yellow fever outbreaks and epidemics. So, the citizens of Galveston decided to build their own railroad line that would reach across Texas, into the Panhandle, and across the state line to Santa Fe, New Mexico. The idea was to bypass Houston. The Gulf, Colorado & Santa Fe Railroad (GC&SF) was chartered, and the state agreed to grant 16 sections of land per mile of track laid." from Wikipedia. 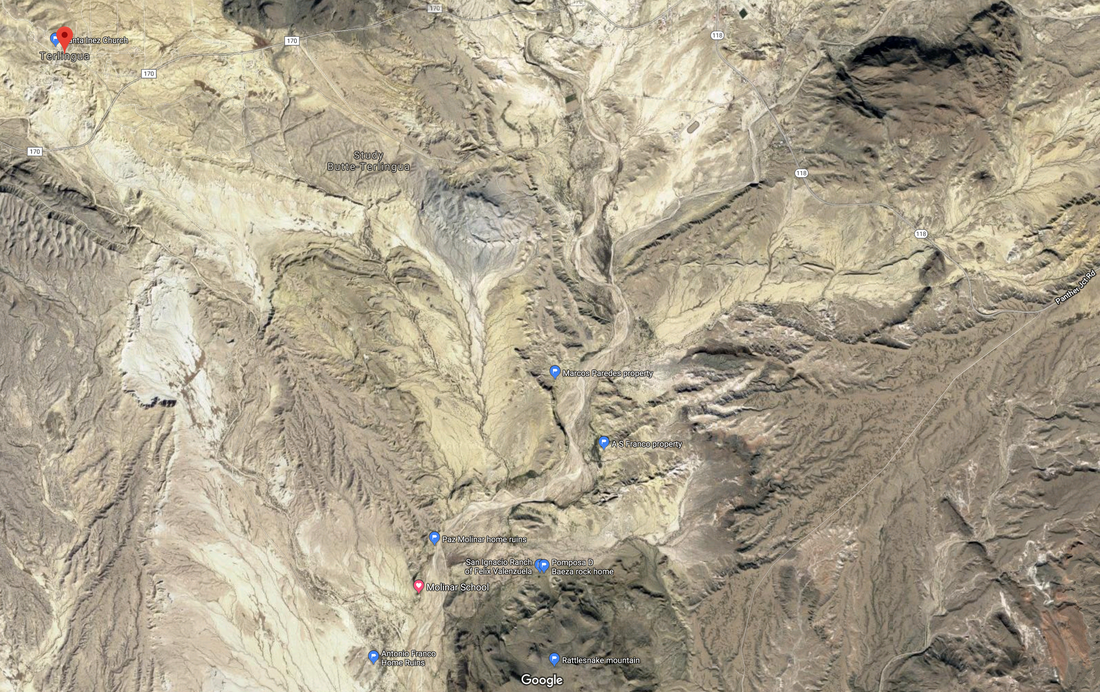 February 18, 2011 Bob Wirt organized a trip
to see the Valenzuela, Franco and Molinar ruins
An early breakfast before starting with
Bob Wirt, Ken Barnes, Cynta Narvaez, Celestina Amatulli, Stephen Franco, and Tony Franco
Buy plenty of water bottles for the day and sunscreen - yes! in February you need sun blocker -
and head down Highway 118 to the Big Bend National Park
In BBNP head southwest on the Old Maverick Dirt Road
Get on road to Valenzuela San Isidro Ranch through BBNP.

Exiting the BBNP on remnants of private road to Valenzuela Ranch ruins
going north along east side of Rattlesnake Mountain
then go west between Willow Creek ad Rattlesnake Mountain.
Discussion with Tom Alex and Ken Barnes about the name of Rattlesnake Mt.
This video ends with arrival at Valenzuela home ruins at north end of Rattlesnake Mt.
The Valenzuela Rock House Ruins
When Josefa Valenzuela's mom Pomposa Dominguez Baeza became widowed, Felix  built this stone house for her to live with them.  Later she went to live in El Pueblito with her son Alberto and the stone house was used for storage (especially the back room). According to Celestina Valenzuela, "Chele," Josefa would go knit there on hot summer days because the rock house was cooler.  Pomposa planted some roses there and when she moved to Mexico her grand daughter Zenaida Valenzuela Franco kept them watered. Many years later in the 1940s she took them with her first to her home in Alpine and in the early 1960s to Fort Stockton.
Some Bios
Cynta Narvaez is the proprietor of Villa Terlingua