The stones of Terlingua are Silent
by Dr. Jalapeño Schwartz 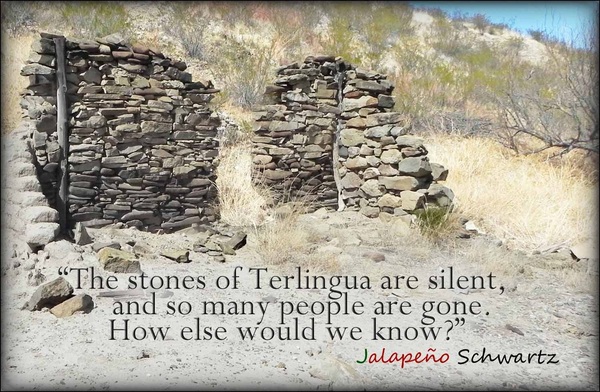 The words above were used by Dr. Jalapeño Schwartz to tell a friend the value of the websites "Familias de Terlingua" and "Life Before the Ruins." He notes that the past has so faded with the departure of the people, until today the past is not readily visible in the stones of the ruins that remain.

His kind and wonderful words just sounded like haibun, concise Japanese prose-poetry. So we got his permission to place it in our "Welcome" page.  As we initiate this poetry page it seems fitting to include it here as the first poem.  Above, his words stand among the stones which once were the home of Severiano Chavarría at la Coyota. 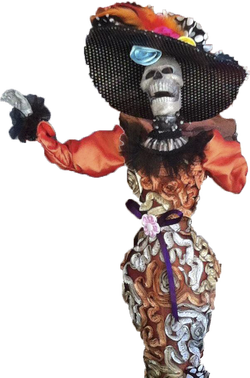 An Unconscious Ofrenda
By Darla McBryde
and Antonio S. Franco

What is a day, a week, a month to the dead?
A year is a second. A month does not matter.
Time haunts the living.  The dead do not see it.

The dead know nothing
of the long hours before the veil thins
El Rio Bravo loosens the locks on the border,
shifting a bit to the north, a bit farther south,
eventually blurring to muddy memory.

Under this charm the Day of the Dead wakes.
In a long overdue reunion of blood and flesh
three brothers sit under the lazy eucalyptus and
rustling cottonwoods next to Terlingua Creek.

Along their way they had visited at their mother’s grave,
peaceful under the still marble angel wings.
Cigarette smoke wafts across the bougainvillea,
but no one is smoking in this grotto of descansos,
ghosts are welcome.

Their mother joins the Old Ones
eavesdropping on the brothers' stories
as once again their father walks the streets,
his bravado and swagger bigger,
more legendary, more alive than ever.

Three hearts beat as one.  Kindred blood flows through veins,
sacred conduit to what was, what is, what will be.

Sugar skulls bare their teeth in a knowing grin
while salt and tequila loosen tongues
to recount the tales that shaped the lives,
an unconscious ofrenda.

Ravens in full goth regalia invite The Bones to dance
as day trades the sun for night and moon.
Smoke from forgotten bonfires billows upward,
diffusing into the Milky Way. 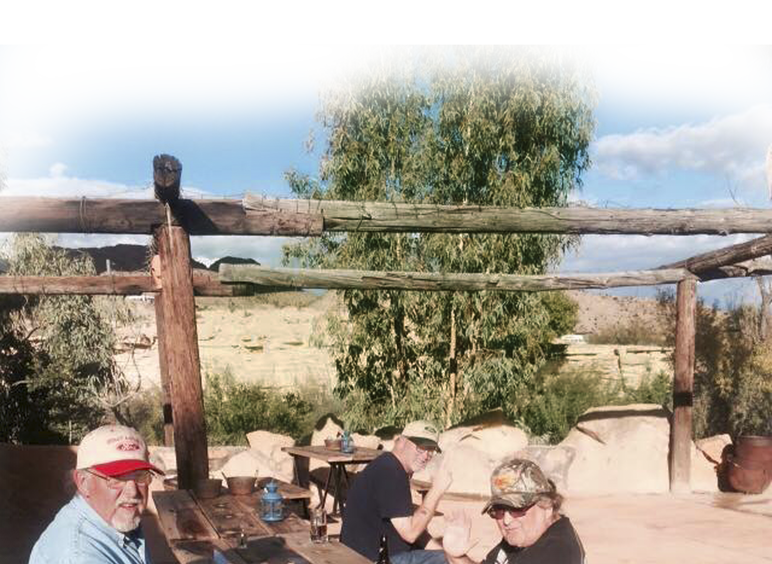 This page was updated April 29,2013 with minor changes.