"Bob Wirt told me the story of the "location" of the name Terlingua.  I don't recall the details but the main point was that the first post office with the name "Terlingua" was at the place now referred to as Terlingua Abajo.  The postmaster for Terlingua served there while commercial activity flourished, but after business declined he moved off to California. and was gone a couple of years but never resigned as Terlingua Postmaster.  He came back to be postmaster at Mariposa Mine. Since he was still officially the Terlingua Post Office Postmaster, the post office at Mariposa Mine became the new Terlingua post office.  Around 1909 Howard Perry got the postmaster to move to the Chisos mining operations location, and that post office then became Terlingua because of the postmaster.  I have not been able to verify nor negate this story, and I may have forgotten details of exactly how Bob Wirt told the story, but the story makes sense. "
Antonio. S. Franco 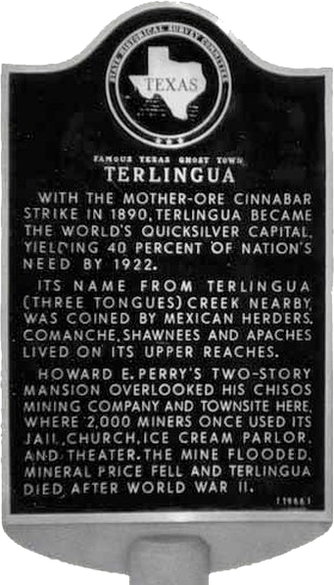 In support of that account of the location of "Terlingua" I quote here from an email Bob wrote to  me: “… a farming community along Terlingua Creek about 2 miles upstream from Santa Elena Canyon. When I ask people who lived there about where they lived, they frequently answer "Terlingua," because to them that was the original Terlingua. The miners stole the name and renamed the farming community Terlingua de Abajo (also occasionally referred to as Terlingua Vieja). To confuse the issue even more, the whole area (including Terlingua, Terlingua de Abajo, Castolón, Study Butte, Lajitas) was often referred to as Terlingua because that is where the post office was most of the time.”

It may be that since Spanish nouns have gender and usually (but not always) end in the letter "a" if they are feminine and adjectives have to agree in gender with the nouns they modify it might seem that Abajo should be Abaja to agree in gender with Terlingua.  But that is wrong!  Words in Spanish generally derive from Latin.  But when a Spanish word is derived from Greek then the use of "a" and "o" shifts.  For example, the word for radio in Spanish is la radio.  But Terlingua is not a Greek or Greek derived word, so Terlingua Abaja makes sense only if it means Terlingua descends.


Most of the time that's true, but Spanish reveals exceptions such as "el agua" or "la radio."  It is confusing and even native speakers in the Big Bend area will frequently say "el radio."
Bob Wirt in Life Before the Ruins page The Anastacio Carrillo Family History  www.lifebeforetheruins.com/anastacio-carrillo.html has a footnote for Anastacio's fourth son Calistro Carrillo that mentions the move of the Terlingua post office from Mariposa Mine to the Chisos Mine "around 1909; so Chisos became Terlingua.
The footnote reads:
"(a)    Although the town surrounding the Chisos Mine officially became Terlingua when the post office moved the from the Mariposa Mine around 1909, church records continued to refer to the town as “Chisos” for many years afterward. This probably was because St. Agnes Church also was known as the “Chisos Mission.” Footnote (a) to Calistro Carrillo fourth son of Anastacio Carrillo at https://www.lifebeforetheruins.com/anastacio-carrillo.html The Anastacio Carrillo Family History"