Pre-European History of the Americas

History of languages in the Iberian Peninsula https://unravellingmag.com/articles/portuguese-and-spanish/
Aquitanian, Tartessian, Lusitanian, Celtiberian are some of the languages believed to have existed on the peninsula before the arrival of the Romans.

218 BCE arrival of the Romans: there was no Spain or Portugal; there was only Hispania, initially divided into two sections, Hispania Ulterior and Hispania Citerior.

197 BCE The Romans establish the overseas province of Hispania.  It was overseas because the land between Roman and Hispania, Gaul, was not conquered til 150 years later.
27 BCE  The peninsula was divided into 3 areas:
Lusitania the southwest part of Iberian Peninsula,
Baetica the south of the Iberian Peninsula, and
Tarraconensis; the rest of the peninsula.

284 CE, In 284 CE it becomes 5 areas: as parts of Tarraconensis become the new provinces of Galicia (the northwest) and Cartaginense (the southeast).
https://unravellingmag.com/articles/portuguese-and-spanish/ 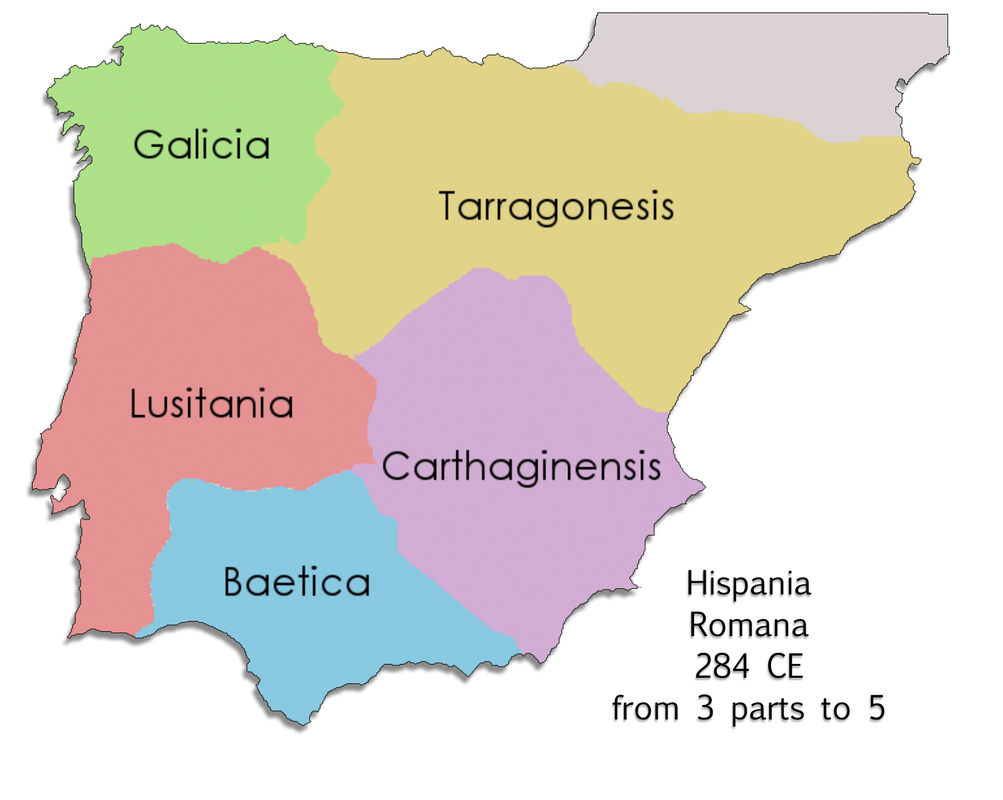 400s CE several waves of invasions of Hispania by Germanic peoples like the Vandals, the Alans, and the Visigoths.

415 CE Emperor Honorius  invites the Visigoths to rule the province for Rome.

409 CE Galicia became a separate Roman vassal state under the Suebi, a separate Germanic race from the Visigoths, and remained an independent Suebi kingdom until 585 CE.

711 CE Visigothic Hispania was almost entirely conquered by the Moors of the Umayyad Caliphate, becoming the new Muslim kingdom of Al-Andalus. 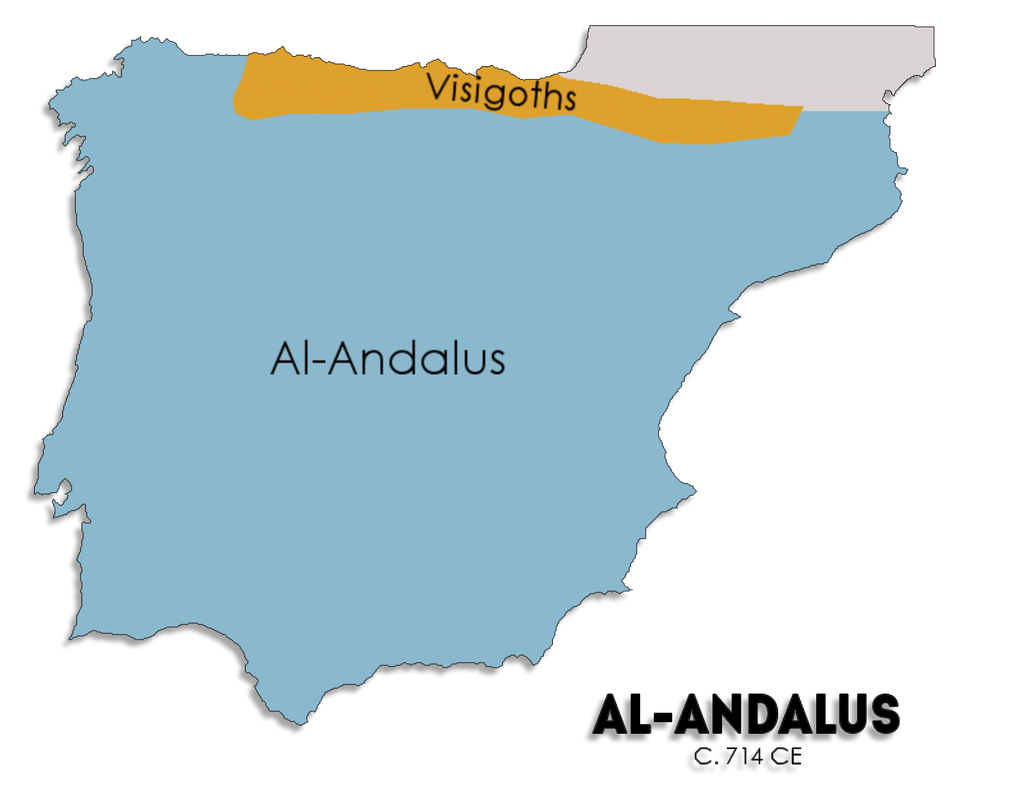 711-1492 Reconquista (English Reconquest), in medieval Spain, a series of campaigns by Hispanic Christian states to recapture territory from the Muslims (Moors).  The Iberian reconquest, which began as a traditional war of conquest, became a crusade against Islam and judaism and fused an Iberian Catholicism that Castile and Portugal later transplanted around the globe.

1171 August 15 birth of Alfonso IX King of Leon and Galicia
1478 November 1: Spanish Inquisition established; under the influence of clergyman Tomás de Torquemada, the monarchs created the Tribunal of Castile to investigate heresy among Conversos. The effort focused on stronger Catholic education for Conversos, but by 1480, the Inquisition was formed.  Go to The Inquisition page.
1482 Pope Sextus, hearing the complaints of Conversos who had fled to Rome, proclaimed the Spanish Inquisition was too harsh and was wrongly accusing Conversos so he appointed a council to take command of the Inquisition.
1484 Letter from Murcia to Juan de Baeza giving him farmland at Campilla del Rey over buried Arab Caliphal Baths.
https://www.archivodemurcia.es/p_pandora4/results.vm?o=&w=Baeza&f=&l=15&t=%2Bcreation&s=0&c=1&lang=es&view=archivo
1490 July 1 Ca Franco and his son Yucé Franco were arrested by the Inquisituion.
1492  'Gramática castellana' ('Castilian grammar'), first grammar for a European language published by "Antonio de Nebrija" Antonio Martínez de Cala y Jarava born in Lebrija in 1444, died in Alcalá de Henares in 1522.
1498 Torquemada dies

1521 Capitán General Baltasar de Temiño y Bañuelos arrived in Zacatecas as the city was being founded.  Since he was present at the ceremony he is conisdere done of the four founders of acateas.  He was born circa 1530 in Briviesca, Burgos, Castilla y León, Spain
Baltazar de Temiño y Banuelos is an ancestor of many people in Terlingua.
1535 The Viceroyalty of New Spain: officially created on 8 March 1535 as a viceroyalty (Spanish: virreinato),
the first of four viceroyalties Spain created in the Americas. Its first viceroy was Antonio de Mendoza y Pacheco, and the capital Mexico City was established on the ancient Mexico-Tenochtitlan.
1542 The Viceroyalty of Peru (Spanish: Virreinato del Perú) was a Spanish imperial provincial administrative district, created in 1542, that originally contained most of Spanish-ruled South America, governed from the capital of Lima.
1546
1556 Philip II ascended the Spanish throne.
1562 Nueva Vizcaya created by Francisco de Ibarra, including what would become Durango, Chihuahua, Sonora and Sinaloa.
1563 The foundation of the city of Durango by Francisco de Ibarra (1539-.
1564 Santa Barbola (later Santa Barbara) founded, first European settlement in what would become the state of Chihuahua.
1570 Inquisition established in Mexico
1598 king Phillip II of Spain died
1607 Spanish colonists establish the city of Santa Fe in the province of Santa Fe de Nuevo México.[7]
1609 to 1615, 150,000 Muslims who had converted to Catholicism were forced out of Spain by Phillip III.
1610 Cosme Molinar, ancestor of the Terlingua Molinar families, was born (approximate date 183 years before Houston and Austin were born.
1610 The Palace of the Governors is built in Santa Fe, the new capital of Nuevo México. Today it is the oldest continuously occupied public building in the United States.[8]
1631  El Real de Minas de San Joseph del Parral founded. Incredibly rich silver deposits discovered at La Negrita Mine (now known as La Prieta). Silver was so plentiful one could cut silver veins with a knife.
1632-1739 El Real de Minas de San Joseph del Parral becomes state capital of Nueva Vizcaya, which encompassed present day Chihuahua and Durango.
1680 Aug 10 An alliance of Puebloans coordinated by Popé initiates a mass revolt against Spanish colonists occupying what is now northern New Mexico in an effort to abolish European influence in the area. More than 400 people are killed and the Spanish are unable to reconquer Santa Fe for another 12 years.[9]
1692 Santa Fe is formally repossessed by the Spanish after Diego de Vargas negotiates a peace with the Pueblo Indians. The following six years witness a difficult reinstatement of Spanish and Franciscan rule over the Pueblos, including another revolt in 1696, which is successfully countered by De Vargas and his forces.[10][11]
1715 Los Adaes Charlevoix (Hist, de la Nouvelle France, ed. Shea VI, p. 24) relates that a Spanish mission was founded among the Adaes in 1715. A Spanish fort existed there, seven leagues west of Natchitoches, as late as the commencement of the nineteenth century. AccessGenealogy
1729-1770 Presidio Los Adaes served as the capital of the Spanish province of Tejas.  "Thirty miles east of the Sabine River in northwestern Louisiana lie the ruins of one of the first capitals of Texas, a fact little known to most people today. Yet from 1729 to 1770, Los Adaes served as the official capital of the Spanish province of Tejas on the northeastern frontier of New Spain."  https://texasbeyondhistory.net/adaes/
1743 April 13 Thomas Jefferson was born
1759 Oct 7 A Spanish attack on a fortified Indian village along the Red River in what is now Texas is repulsed and defeated by allied Wichita, Comanche, and Tonkawa tribes.[14]
1762 Nov 13 France transfers all of its territory west of the Appalachian Mountains to Spain in a secret treaty just months prior to the negotiations that end the French and Indian War.[15]
1787 Jose Bernardo de Galvez y Gallardo died in Aranjuez, south of Madrid on June 17, 1787. We remember this outstanding character, as he was one of the most important officials of the Spanish Crown in times of the colony, also , because he was one of the first senior officials to travel to Sonora to work. Gálvez was and had an excellent reputation among the royal house of the Bourbones, so he was appointed General Visitor of New Spain, a charge by which he came to the American territory to deliver justice, collect taxes, monitor authorities and implement liberal policies , known as bourbon reforms.
In his walk through American territory, he came to Sonora to combat indigenous peoples in resistance. Curious case, when Jose de Gálvez was in The Pitic he got mad in the head. His juniors reported that the visitor, the highest authority in the territory, began acting strangely, exhibiting multiple personality symptoms and giving senseless orders, for example, wanted to bring monkeys from Central America, dress them up as soldiers and put them to fight against the indigenous rebels. For these delusions, he was ordered to return to the CDMX.
Already enhanced from the madness he suffered, he was sent north once again to high California to scare away the presence of Russians in the region. Afterwards he continued his rising career in government, politically organizing the territory, carrying out military expeditions, making trade and economic reforms, as well as scientific projects.
His visit to Sonora was a bump in his trajectory, as it was the territory where he went crazy. Despite this, the authorities awarded him in 1785 the king created the Marquess of Sonora and named José de Gálvez Marquess.
TEXT: @mirinda_gd
SOURCE: Ortega Soto, Martha, ′′ The Spanish colonization in the first half of the 151-190th century ", pages 151-190 in General History of Sonora. Tomo II: From Conquest to the Free and Sovereign State of Sonora, Hermosillo, State Government of Sonora, 1985.
1793 Sam Houston and Steven F. Austin are born.
1800 Oct 1 Under pressure from Napoléon Bonaparte, the Kingdom of Spain transfers the colony of Louisiana back to the French Republic with the secret Third Treaty of San Ildefonso.

1803 Apr 1 The United States agrees to buy the colony of La Louisiane from the French Republic for the price of $15 million.

1803 Dec 20 The United States officially takes control of Louisiana, an enormous area of imprecise boundaries extending from the Mississippi River west to the Rocky Mountains, more than doubling the land area of the new nation.
1808 Napoleon conquered Spain and ordered the Inquisition there to be abolished.
texasbeyondhistory.net/adaes/maps.html
1811 Father Miguel Hidalgo executed by firing squad and beheaded in Chihuahua.
Chihuahua Mint founded to coin the gold, silver and copper being mined locally.
1821 Mexico gains its independence from Spain
1824 Nueva Vizcaya split into three components: Durango, Chihuahua and the territory of New Mexico. Durango complained about being ruled from Villa Chihuahua, and that the territory was too big to be governed effectively.
1826 On May 22 Mexico passed laws removing noble titles.
1826 July 4 Thomas Jefferson died (aged 83) in Monticello, Virginia
1834 July 15: Spanish Inquisition disbanded  after 356 years
1836 El Real de Minas de San José del Parral becomes Hidalgo del Parral in honor of Padre Miguel Hidalgo.
1841 Texas Republic invades New Mexico. Chihuahuan forces defeat the Texans and capture General William McLeod, sending him to Mexico City as a prisoner of war
1864 Moisés Franco Sefardi born in May 1864 in Istanbul, Turkey; his name is from a village in Navarra.
Pecos County Milestones:
08 May 1871 Pecos County created from Presidio County and Non-County Area 26
it was not fully organized.
(Texas Laws 1871, 12th leg., 1st sess., ch. 70/p. 73)