The Spanish Inquisition
1478 November: under the influence of clergyman Tomas de Torquemada, the monarchs created the Tribunal of Castile to investigate heresy among Conversos. The effort focused on stronger Catholic education for Conversos, but by 1480, the Inquisition was formed. 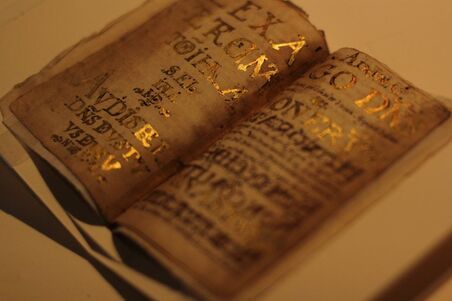 BBC News: Secret Mexican diary sheds light on Spanish Inquisition By Natasha Pizzey Mexico City
Published 3 June 2017  https://www.bbc.com/news/world-latin-america-40029453
https://www.amazon.com/dp/1093787171/ref=reader_auth_dp
The Spanish Inquisition Legal Proceedings
Links to the Spanish Inquisition records on line will be placed here.
Research Notes:  The Spanish Inquisition of Francos
The pages below are from the book where it tells the story of Ca Franco and his twenty year old son Yucé and their persecution by the inquisition based on the accusations of another Converso, Benito García, who claimed to have seen Jewish rites at the Ca home.
https://en.geneanet.org/archives/ouvrages?action=detail&book_type=livre&livre_id=532895&page=1&tk=17268aa665ab17a1
Isabella of Spain, by William Thomas Walsh published in 1935 in London by Sheed and Ward
Search for "Franco" in Isabella of Spain gave these results: Results : Franco
The story of the persecution of Ca Franco, his son Yucé, of Tembleque [ note: Tembleque is 20 miles south of Ocaño, and 60 miles south of Madrid.] and cousins will be told here with links to the online version of the book "Isabella" published in London 1 in 1910 by an English researcher where this story is told based on actual documents of the time.
Ca Franco and his twenty year old son Yucé lived in Tembleque Spain.  Tembleque is about 60 miles almost directly south of the city of Madrid.
July 1, 1490 Ca and Yucé were arrested because of a confession the converso, Benito García, had made in June after being tortured.  In his confession on June 6,1490 Benito said he had observed certain Jewish rites in the house of Ca and Yucé.

Note that Benito García was a crypto Jew himself.  A crypto Jew or secret Jew is a Jew that had converted due to the pressure from the Catholic Church and the state but secretly remain faithful to his Jewish beliefs and secretly followed Jewish rites and liturgy.  The Inquisition called crypto Jews "Marranos" as a term of ridicule.  "Marrano (n.) also Marano, "a Jew or Moor in Spain who, to avoid persecution, publicly professed conversion to Christianity while privately continuing in the practices and beliefs of their old religion," 1580s, from Spanish, probably literally "pig, swine," an expression of contempt, from Arabic muharram "forbidden thing" (eating of pork is forbidden by Muslim and Jewish religious law), from haruma "was forbidden" (see harem)." from the https://www.etymonline.com/search?q=marranowww.etymonline.com/search?q=marrano
The Jewish name for Crypto Jews was "anusim" or "anussim." Benito said another crypto Jew, Juan de Ocaña had urged him back into Judaism.  Note that "de Ocaña" while used in the way we use surnames may be more of a description since the town of Ocaña is only about 20 miles directly north of Tembleque.  So a man named Juan who is from Ocaña is called Juan de Ocaña.  That is how many surnames got created.  P

The idea of family names or surnames is a complex one among the Jews.  The Iberian Jews or Sephardic Jews had  taken on family names on being converted to Catholicism, but the way they chose names is an interesting story in itself.  More on that later.  We merely note that that may explain JUan de OPcaña's name.  Additionally, if they secretly remained Jewish after conversion, they often had their own Jewish name which they used at home in addition to the Christian name that they used in public.  Sometimes, in order not to be easily found by the Inquisition, they deliberately had multiple names to confuse the Inquisition.  There is an interesting debate among scholars as to what exactly is the truth about Marrano names.  Here is a link to a document on Portuguese and Brazilian Marrano names "THE MYTH OF THE MARRANO NAMES" by Anita Novinsky.
The Portuguese Inquisition
The Portuguese Inquisition (Inquisição) Legal Proceedings (Processos )
Research Notes:  The Portuguese Inquisition of Francos, Nuñez

Outros Dados: M.C.; FOI PASSADO AO RÉU TERMO DE SOLTURA E SEGREDO EM 1598-04-12; EM 1598-06-10, FOI-LHE TIRADO O HÁBITO PENITENCIAL, COMUTADO EM PENITÊNCIAS ESPIRITUAIS.
Physical location: Tribunal do Santo Ofício, Inquisição de Coimbra, proc. 5019
Physical characteristics and technical requirements
Má
Notes
Este registo foi migrado de uma base de dados Oracle, disponibilizada ao público em Setembro de 1995 no Serviço de referência do IAN/TT. Estão previstas acções de controle de registos duplicados, bem como de adequação das informações constantes em alguns campos às normas e orientações de descrição arquivística.
Creation date
9/17/2008 12:00:00 AM
Last modification
4/29/2011 9:48:32 PM
Need to add links to this summary record in archives and also links from summaries above to the actual original documents.
https://inquisicao.deadbsd.org/search?cat=&key=Franco
Glossary
Auto-da-fe (Portuguese), auto de fé (Spanish):
the public declaration of the judgment passed on persons tried in the Inquisition courts of Mexico, Portugal, or Spain, followed by the execution by the civil authorities of the sentences imposed, especially the burning of condemned heretics at the stake.
Idade (Portuguese), edad (Spanish): age
Mãe (Portuguese), madre (Spanish): mother
Pai (Portuguese) padre (Spanish): father
Pesquisa (Portuguese), investigación (Spanish): research
Processo (Portuguese) Investigación (Spanish): legal Proceedings of the Inquisition.
Need to add the information on the New Spain Inquisition and the Mexcan Inquisition.  Bring videos in from Sephardic Jews page as necessary.
This page is still under development and not even a preliminary version is yet ready.
This page has been under construction for a few years.  It does not yet contain all the information we intend to include here, but we thought it might still be useful.  Pardon our dust while we work on it.  Some links may not work.  Some information may change pages.  If you find broken links or have additional information to contribute email them to tonysfranco@protonmail.com.