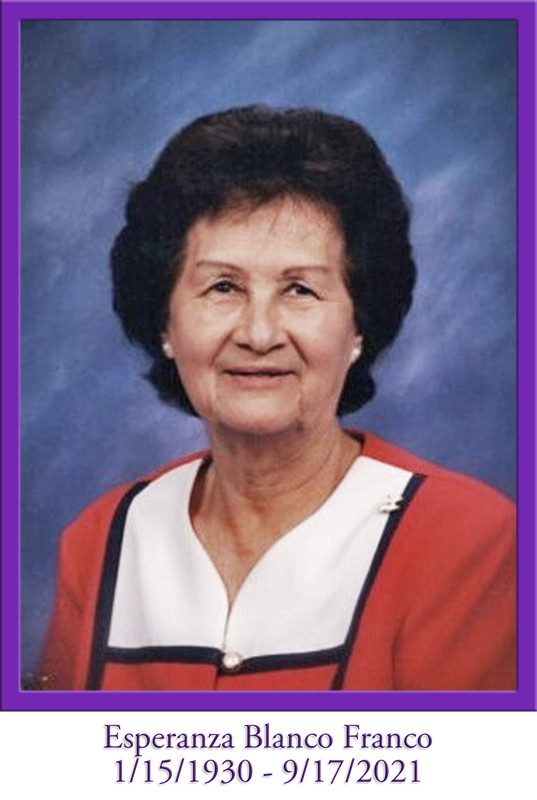 Esperanza Blanco Franco was born on January 15, 1930, in Fort Stockton, Texas. She passed away peacefully on Friday, September 17, 2021, at the age of 91 years at The Courtyards Assisted Living in Odessa, TX.  Esperanza was a loving wife, mother, sister, aunt, grandmother, great-grandmother, and friend.  She will be missed dearly however she will remain forever in our hearts.

Esperanza is survived by
her four children:
Noe Franco,
Toby Franco and his wife Frances,
Rafael Franco and his wife Rosie all from Odessa, TX; and
Ines Franco of Ayer, MA.  Esperanza is also survived by
her sister, Gloria Blanco Garrison and her husband, Donald, from Fort Stockton, TX.
Other survivors include her ten grandchildren, nine great-grandchildren and numerous cousins, nieces, nephews, and friends.

Esperanza grew up in Fort Stockton, TX where she met and married her husband, Florentino “Tino” Franco in 1947.  They started their married life in Fort Stockton and later moved to Odessa in 1953.  They had four sons and one daughter together.

Esperanza worked as a Licensed Vocational Nurse (LVN) at Medical Center Hospital, a childcare assistant and a full-time wife and mother.  Esperanza was also an active volunteer at Saint Joseph’s Catholic Church where she taught C.C.D. and Baptism classes and helped with the spring festival for many years.

Esperanza will be fondly remembered as a woman who loved her family.  She showed her love by making delicious meals every day.  Anyone that came to her house knew that the first place to look for her was in the kitchen.  Esperanza took great pride in her cooking skills.  Also, she was an avid reader.  She would read the Bible and the newspaper each day.  She found great enjoyment in completing crossword puzzles and other word games.  Esperanza will be missed, but one can take comfort in knowing that she worshipped God and has now found peace in Heaven.

Thursday, September 23, 2021
Mass in her honor at 2 p.m. at Saint Joseph Catholic Church in Odessa, TX with Father Frank Chavez officiating.
Burial will follow at the Ector County Cemetery (Los Angeles Section) in Odessa, TX.
The family asks that in lieu of flowers, please donate to a charity of your choice in Esperanza’s memory.


The Franco Family would like to thank everyone at The Courtyards Assisted Living for all the kindness and care they showed to Esperanza in her final years of life.  Also, the family would like to thank everyone at the Martinez Funeral Home for their exemplary assistance with all the funeral arrangements.
Funeral arrangements by Martinez Funeral Home.
The family asks that in lieu of flowers, please donate to a charity of your choice in Esperanza’s memory.
The documents and photos were provided by Inez Franco.
The portrait of Esperanza at the top of the page was provided by Dr. M.J. Garcia.
Information on children from Alpine Avalanche obituary for David Franco