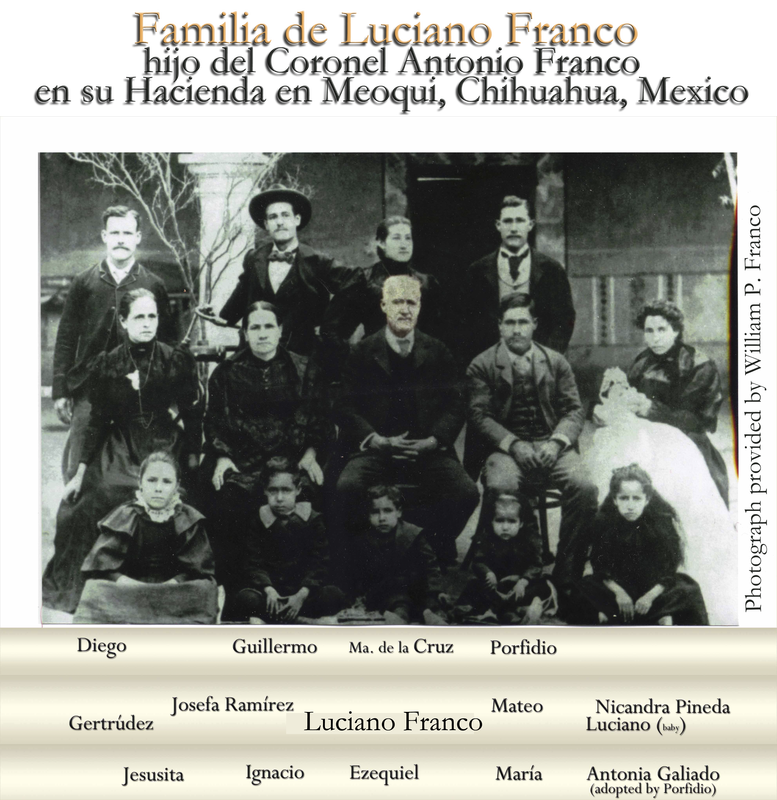 This photograph taken in 1899 of Luciano Franco, son of Colonel Antonio Franco, and his family.  It was provided by William P. Franco.  William's father, Luciano is the baby in the photograph.
Notes for research:
Could Coronel Antonio Franco be the ancestor for all the Francos in the Terlingua area?

The family of Francisco Franco of Terlingua has an oral tradition that the Francos came from Spain in 1802 to the south part of Mexico.  In 1960 Antonio Santiago Franco heard of the oral tradition and had more questions about this
Records show that some Spanish surnamed families from present day Presidio and Brewster counties in Texas have connections with the area from Delicias, San Pablo, Meoqui, San Pedro Meoqui, San Antonio Meoqui, Julimes, Chihuahua, and Coyame in Mexico.

Coyame, Chihuahua, Mexico is about 55 miles west of Presidio, Texas and about 90 miles northwest of Chihuahua, Chihuahua.  Some of his descendants can be found in the Pecos, Texas area and in the Colorado City, Texas area.

I am Antonio Santiago Franco, the editor of Familias de Terlingua
Antonio was a colonel in the Spanish army and settled in a large hacienda in Meoqui, Mexico in the early 1800s.

The Francisco Franco lineage of Francos has an oral tradition that the Francos came from Spain in 1802 some where in the south of Mexico.
The information on this page was provided by William P. Franco.
actualizada el 16 de Marzo 2017
last updated 3/16/2017