This page is preliminary work on Aug 28, 2021
check later to see when it is more filled out.
My working notes to myself are in red.  I need reminders due to diminishing memory abilities.
Antonio S. Franco
The Fulcher Family 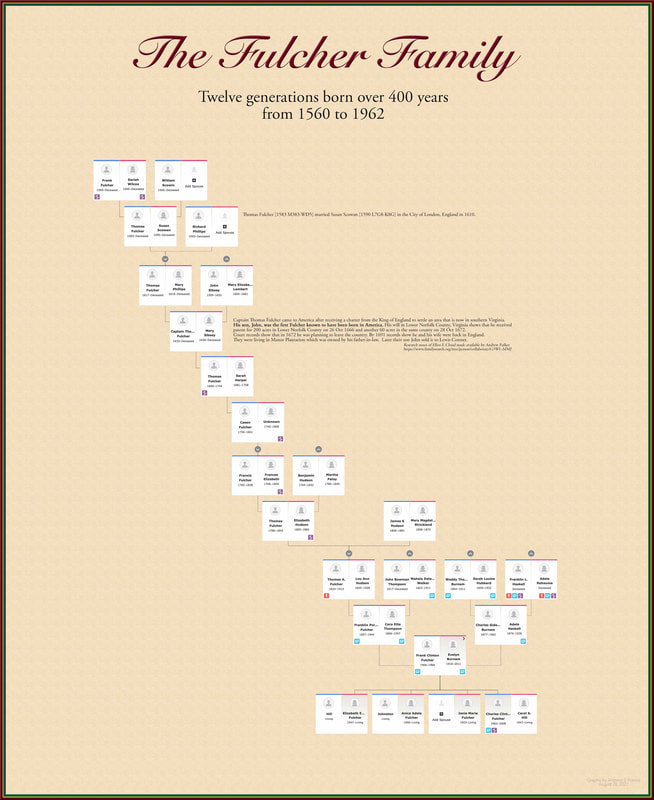 Click on image to enlarge it.
Thomas Fulcher [1583 M383-WD5] married Susan Scowan [1590 L7G8-K8G] in the City of London, England in 1610.  Three hundred years later on May 4, 1910 his six times great grandson Franklin Porter Fulcher and his wife Cora E. Thompson would be living with their children in Sterling County, Texas not far from Big Springs, Texas according to the 1910 US Census.
There is an online book about Capt. Thomas Fulcher (ancestor of Terlingua Fulchers) but it appears to show his other lines of descendancy.  Need to review in detail to see where it branches away.  read it at https://www.genealogy.com/ftm/c/l/o/Ellen-F-Cloud/BOOK-0001/0004-0001.html
“Capt. Thomas Fulcher [1666 G3WL-MMJ] came to America after receiving a charter from the King of England to settle an area that is now in southern Virginia. His son, John, was the first Fulcher known to have been born in America. His witnessed will in Lower Norfolk county, Virginia shows that he received patent for 200 acres in Lower Norfolk County on 26 Oct 1666 and another 60 acres in the same county on 28 Oct 1672. Court records show that in 1672 he was planning to leave the country.

In 1691 records state that he was in England. Thomas and wife lived at The Manor Plantation which was owned by her father, Capt. John Sibsey. Later it was sold to Lewis Conner by their son John.”
From research notes of Ellen F. Cloud made available by Andrew Fulker.
https://www.familysearch.org/tree/person/collaborate/G3WL-MMJ

click on image above to enlarge it.
Franklin Porter Fulcher and Cora E. Thompson had 12 children: 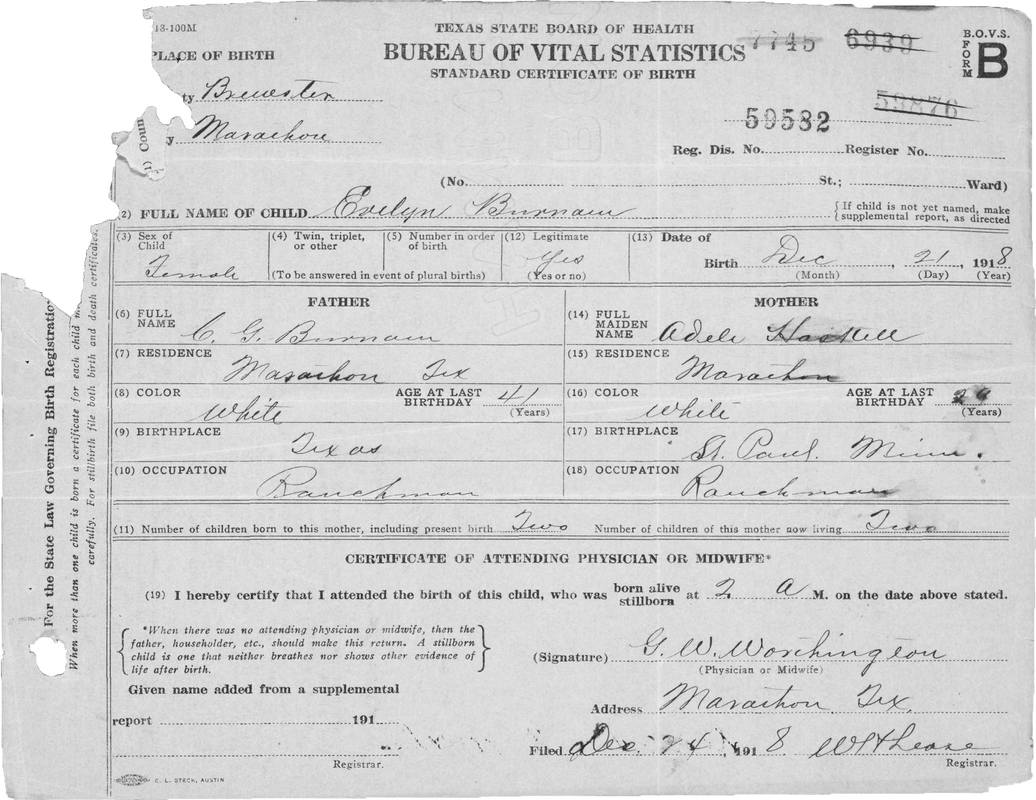 Evelyn's father, Charles Gideon Burnam:
at age 2 was living in Mason, Texas according to the 1880 US Census ( see line 2).
Fifty years later the 1930 US Census shows him living east of Terlingua Creek in Brewster County where he still is in the 1940 US Census line 24.

Fulcher Property
Maria Luisa knows the history of the Fulcher house and cemetery.  I need to add that here.  Here are notes that need to be fleshed out.  Note that the US. Census records can add to this history.

This property had three owners.

Valentín Rodríguez lived in a two-story house with his wife doña Jesús.  They were neighbors of the Garcia's.

around 1934 Jose León was driving and he crashed an died.  Gregorio García was blamed by doña Jesús for her son's death. [I need to clarify why he was blamed if it was Leon who was driving.]

Lupe Hijo de Cipriano but the

Doña Jesús sold to Lupe Hernandes and he built an adobe house and ran a store there.

Evelyn Fulcher Interview
a YouTube video by Todd Smith
of an interview with Evelyn describing family photos shown in the video.
https://www.youtube.com/watch?v=W6WmHo-9olA&t=3s

These photos are from the video posted by Tommie Ann Smith's husband Don Smith which has an interview by Charles of Evelyn circa 2004.  I do not have permission to display these and need to ask if they will allow me to post them. I copied them out of the video and enhanced them to bring out the details.
1910 US Census
Sterling County, Texas
note lines 19 - 30 and note Enumerator is Ollie Fulcher 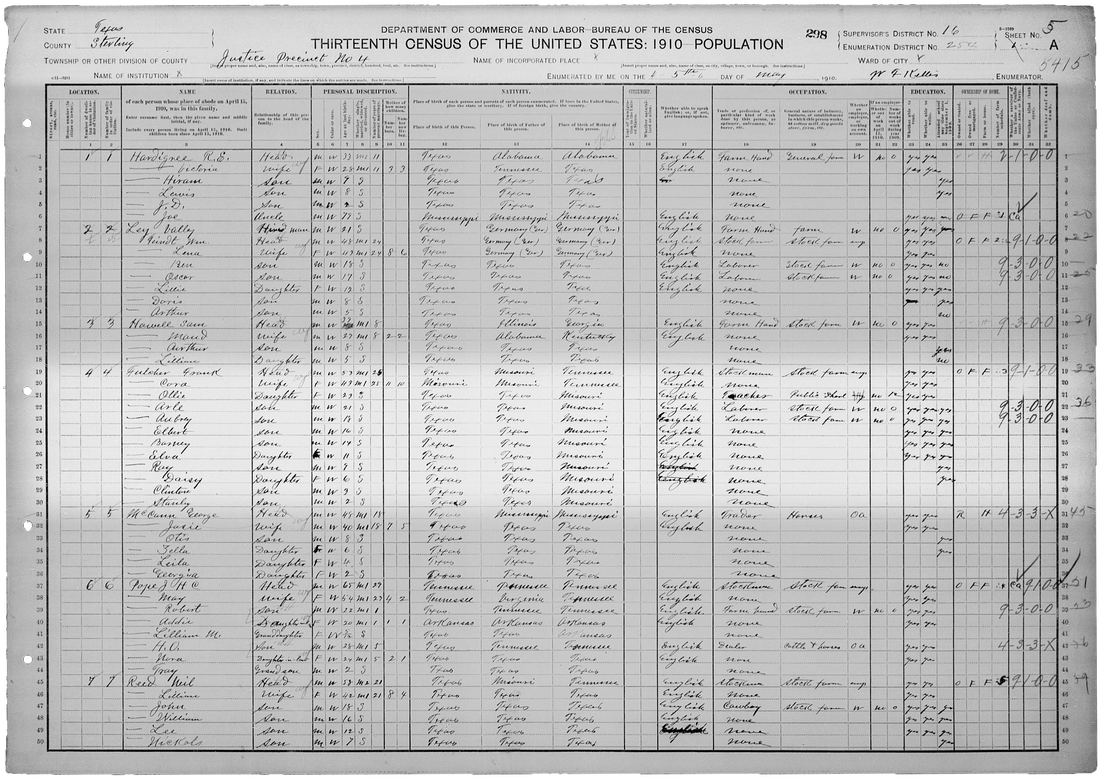 Click on image to enlarge it.
The family moved from Sterling City to Alpine between 1910 and 1920.
1920 US Census
Alpine, Brewster, County, Texas
note lines 53-55 and lines 81-89
1930 US Census
Precint #1 Alpine, Brewster, County, Texas
note lines 38-40
In 1930 Frank C. Fulcher was living with his brother Stanley P. Fulcher and his sister Daisy F. Long in-town and not at a ranch.  Although Frank and Stanley were single and in their early twenties (Frank was 23 and Stanley was 22) they owned the $2,500 home they lived in. Daisy F. Long was divorced at 23 and living with her brothers.  Frank and Stanley worked as truck drivers for a transfer company and their sister Daisy was the book keeper. 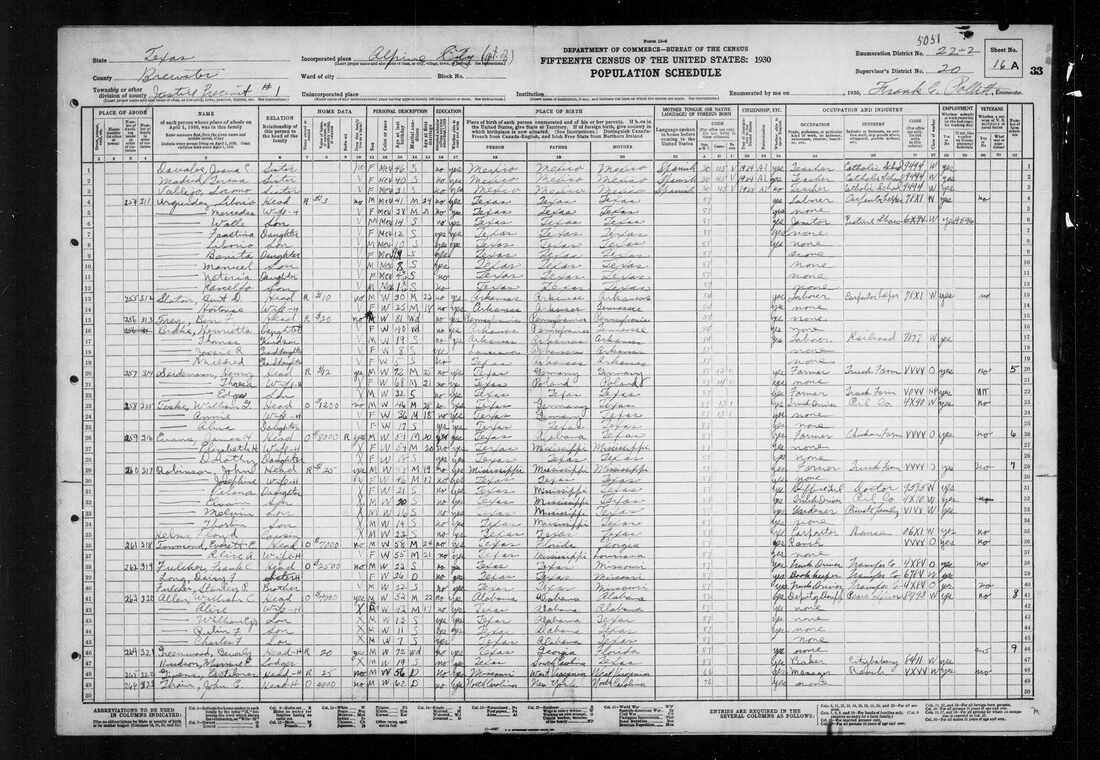 Click on image to enlarge it.
1940 US Census
Alpine, Brewster, County, Texas
note Arl is the census enumerator and he is now living lines
Research Notes:
An excellent source of information on the Fulcher family is found at
This page was started August 23. 2021.  The information is from Evelyn Burnam Fulcher's obituary, and from a video provided by Todd and Tommi Smith which has family photos that are being described in 2004 by Evelyn Fulcher in an audio recording of an interview by Charles Fulcher. This video is on YouTube at https://www.youtube.com/watch?v=W6WmHo-9olA.  We strongly recommend watching this video.  Additional information from Antonio Franco's research.