by Louisa Franco Madrid
October 31, 2011
When I was growing up, I often heard stories of some mysterious lights coming toward the García house -- lights that never arrived. The house was alone in the lonely landscape south of Terlingua. At other times people thought there was a car coming because they could see the lights.  Except no car ever arrived. The lights always disappeared.
People told stories of  witches flying by ,disguised as balls of fire.  My uncle Gregorio would tell them it was birds that were wet, and since they were oily they flickered like lights.  The family named the place where the lights disappeared, La Cueva de Las Brujas (the witches' cave).  They said maybe that was a witches playground.
After my mother married and my parents were visiting at the García home, my father saw the lights and he went to meet up with them, against my mother’s wishes.  She was frightened, but he came back and said the lights disappeared at the same spot everyone mentioned.

In 1957, my husband Joe and I and our children went to visit my grandmother, Mama Luisa, in Alpine. While there we decided to go visit the García place; since I had not seen it, except as a baby and I did not remember it.  My aunt Asia (Altagracia) went with us, so she could show us where it was. She was so happy and took us all over the place. On the way back she showed us the Cueva de las Brujas.  I took a picture.

At that time the road to the García place crossed Terlingua creek.  Now it is different. The Joe Moss Road goes right by the house. When we have gone there, during the Terlingua Reunions, I have not been able to identify the Cueva de las Brujas.

When I was talking about this with Tony Franco, he told me he had read about ball lightening in science articles and wondered if that might explain it. That makes a lot of sense to me. And that might be the explanation for the mysterious lights of the cueva de las brujas.

This is the García place mentioned in the remembrance.  On Easter weekend April 20, 2019 family members and local experts took a tour of family sites that started with a visit to the house that Dolores García built.  Dolores' granddaughter, Louisa wrote the remembrance and is seen on the left  side of this photo.  To her right in the center is Sandy Smith, the current resident of the house, who graciously hosted the tour group.  On the right is Ezequiel Santiago who was the last member of the García family to live in the home.  It later was owned by Joe Moss and is today known as the Joe Moss home. 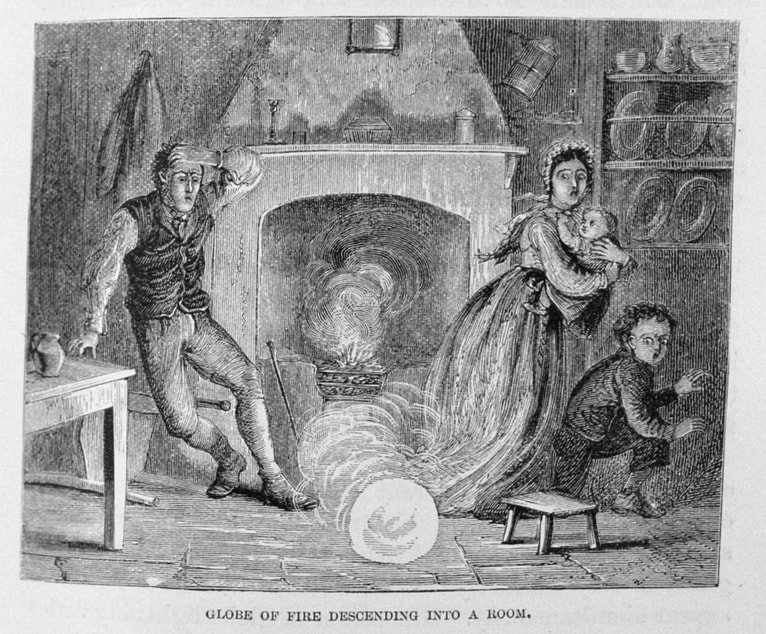 On January 7, 2014 APS Physics reported that researchers for the first time measured a spectrum of light emitted by the rare and elusive ball lightning.
October 31, 2019 This page was edited to remove obsolete links and update the linked information.
We also added the photo and information of the García place aka Joe Moss home where the remembrance takes place.
Back to Our Stories  |  Discuss the Story