Molinar Family Tree
Juan Molinar
Juan Molinar  married Zenaida Gonzalez circa 1906.
They had 13 children:
1. Son Victoriano Molinar,
born 19 Jan 1907 in Presidio County.
He died 19 Mar 1938 in Alpine and is
buried in the Terlingua Cemetery (his grave is marked).

2. Daughter Jesus Molinar,
born circa 1909 in Texas.
She married Jose Del Toro.
After his death, she married Faustino Navarro.
There were no known children of either marriage.

4. Son Anastacio Molinar,
born circa 1912 in Texas (probably Terlingua).
married Ezequila Hernandez, born circa 1920 in Terlingua de Abajo.
She was the daughter of Guadalupe Hernandez and Teresa Baeza. They had six children

5. Daughter Eulalia Molinar, born 3 Apr 1914 in Terlingua. She died in Brewster Memorial Hospital, Alpine on 5 Apr 1990 and is buried in Holy Angels Cemetery. She married Gonzalo Rodriguez. They had no known children.

6. Son Juan G. Molinar, born circa 1915 in Terlingua. He married Josefina Hernandez, born circa 1923 in Terlingua de Abajo. She was the daughter of Guadalupe Hernandez and Teresa Baeza. They had four children. Is this the one?  Was he?

8. Son Filberto G. Molinar, born 1919 in Terlingua. He died in Hospice House, Odessa, on 21 Oct 2002 and was buried in Sunset Memorial Gardens, Odessa. He married Jesusita “Susie” Jaquez. They had two known children.

9. Daughter Zenaida Molinar, born circa 1922 in Terlingua. Her married name is White.

11. Son Roberto Gonzalez Molinar was born 8 Aug 1925 in Terlingua. He died in Methodist Hospital Center, Odessa, on 17 Jan 1998. He was buried in Rose Hill Cemetery, Odessa. He married Leonarda “Lee” Sanchez in Carlsbad, New Mexico on 3 Apr 1951. They had seven children (names available upon request).

1. Unknown 2. Pile Valenzuela 3. Norberto Rios 4. ? 5.Sabino Macias 6. ? 7.Domingo Granado 8. Fidela Valenzuela 9. Enrique Molinar
10.Ezequiela Hernandez  11. Anastacio Molinar 12. ? 13 Juan Valenzuela, son of Sara & Leonidez Valanzuela
The Ruins of the Paz Molinar Home
The Paz Molinar home is in the foreground.  Cynta de Narvaez is to the right next to the ruins of a truck.  Terlingua Creek runs along the left side of the photograph.  At the top of the photo in the center is the hill with a tilted top which is where the Molinar school was located.  It was two miles from the Paz Molinar home. 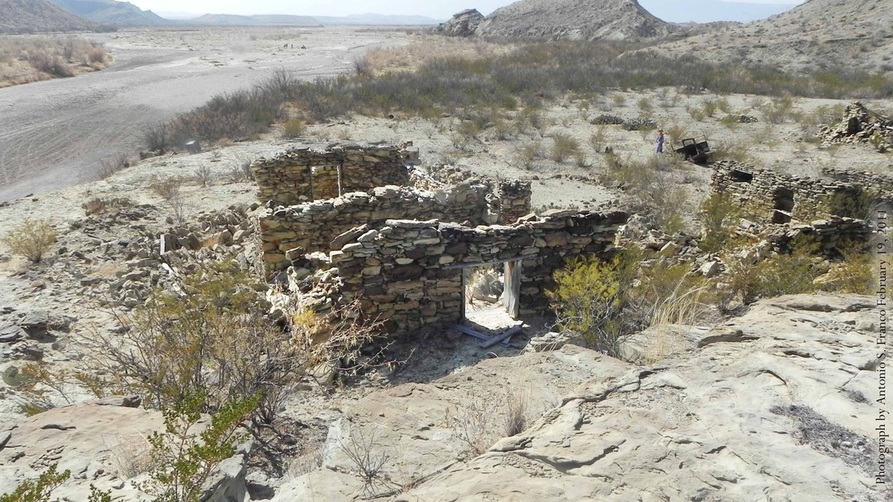