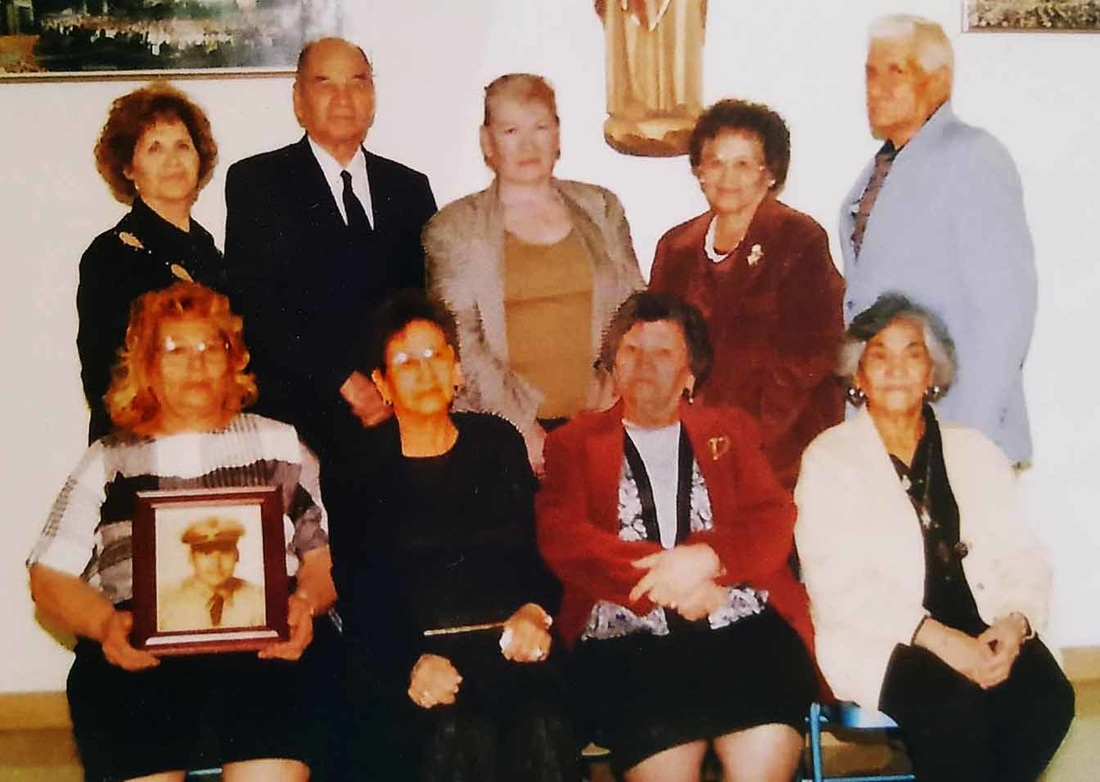 The Story:  Both Jesús and Virginia were born in Mexico.  He was eleven years older than Virginia.  When they got married in Mexico about 1912 he was 27 and she 16 years old.  Their first child Raúl was born in the state of Coahuila, Mexico in 1913 when Carranza was the governor there.  [The one telephone in Terlingua was installed in 1913 at the Chisos company store.]
_
So in the midst of all this confusion, the 1930 Census indicates that Jesús, Virginia, and Raul entered the U.S. in 1914 from Mexico and were naturalized.  The last nine children were born in the United States in Marathon, Texas.
Raúl Vásquez, their first child, married Concepción Luján September 10, 1933 in El Paso, Texas.  This marriage unites the Vásquez family with the Rita and Severiano Chavarría family since Concepción's mother was Fernanda Chavarría, fourth child of Rita and Severiano.  Concepción was born about 1912 in Terlingua.  Did Concepción's mother Fernanda leave La Coyota where her parents lived when she married Julio Márquez Luján and go live in Terlingua? [Click here to read about what place was called Terlingua when Concepción was born.]
Virginia Vásquez their fourth child married Liberato Gambóa January 10, 1935.  This marriage unites the Vásquez family with the Gambóa family.
Juana Vásquez, their eighth child, married Panfilo Morales.  Panfilo was born in Mexico June 1, 1896; and died November 3, 1992 in Indio, Riverside, California.  Panfilo's mother's maiden name was Anaya.  It is not certain, but Juana and Panfilo may have had a son, Panfilo V. Morales, born June 11, 1951 and died July 28, 1972 at the age of 21.
What the world was like in 1885 when Jesús María Vásquez was born:
Transportation was changing.  The year 1885 saw the world’s first gasoline pump in Indiana, the world’s first motorcycle, the patent for the bicycle, and the world’s first practical public electric tramway (in England).

In public life, the world we know was being created.  The Washington Monument was dedicated; and the Statue of Liberty arrived in the US; AT&T incorporated; and the US Salvation Army and the Boston Pops started.
What place was called Terlingua in 1912 when Concepción was born?

Bob Wirt wrote in a post on June 23, 2010 in Familias de Terlingua discussion page Discuss any Family that the original  Terlingua possibly is “… a farming community along Terlingua Creek about 2 miles upstream from Santa Elena Canyon. When I ask people who lived there about where they lived, they frequently answer 'Terlingua,' because to them that was the original Terlingua. The miners stole the name and renamed the farming community Terlingua de Abajo (also occasionally referred to as Terlingua Vieja). To confuse the issue even more, the whole area (including Terlingua, Terlingua de Abajo, Castolón, Study Butte, Lajitas) was often referred to as Terlingua because that is where the post office was most of the time.”

This is very well confirmed and I have the documentation printed and highlighted. I have found new cousins and a few are now my friends here on Fb. I've been doing a little bit of research and hope this information helps out anyone needing to fill in the family chart or trying to start one. You all please share with the rest of the family that has interest. Love you all.
a little more information I found, is Hilario married Jesus Espinosa, sister of Josefa. Both were widowed and Jesus was 35 years old, I believe Hilario was younger. I'll have to look at that again a little closer.
If you share your Ancestry information to FamilySearch.com more people will have access to it.  That is the site FdT will work directly with because it is free so anyone may join and work with it.
Transferring information between Ancestry.com and FamilySearch.com
Create a GEDCOM file of your data on Ancestry.com, and upload that data to Family Tree.
click the buttons below for details on how to do it.
Create a free Family Search Account
Share Info in Ancestry with FamilySearch
The information for this page came primarily from family members including Ramón Vásquez, Sue Carrasco, and Isabel Watkins.
Family photos from Sue Gamboa Carrasco with additional background research by Familias de Terlingua editors.
This page was edited December 15, 2016 for formatting and content. Content changes mostly from family member Isabel Watkins.
This page was edited April 13, 2018 with information from family member Pam Bass Kojis