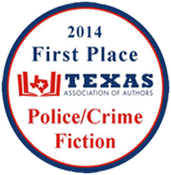 April 1, 2014:  Big Bend Country’s own Elizabeth A. (Beth) Garcia was awarded Best Crime/Police novel of the year from Austin-based Texas Authors Association at the awards banquet in Austin on June 21, 2014.  The day after being presented the award Garcia will have a book signing event at Malvern  Book Store in Austin.
The award is for her first published novel, One Bloody Shirt at a Time. In it, she introduces Deputy Margarita Ricos, the heroine of the Deputy Ricos Tales series. As Garcia states in the novel’s introduction, “Margarita is not just any deputy. She’s a twenty-five-year-old Chicana with attitude who grew up on the edge of the United States in Terlingua, Texas. There, the peoples and cultures of two countries are blended, more than separated, by the once-fierce Rio Grande.”  [Continue Reading]
We are no longer in this relationship with Amazon.com.  We have a new relationship with Amazon but it will take time to redo the pages to redo our whole books section.  So the following