Ruperto Chavarría
Ruperto married Angelita
on November 6, 1901
in Ojinaga Mexico in Jesus Nazareno Temple.
Ruperto and Angelita had no children.
Their Story:
Ruperto was born in Fort Stockton, Texas in 1877 and moved with his parents to La Coyota probably in 1884 (though it is possible it was early 1885) when he was  about seven years old.  La Coyota is located at the base of a very small mesa right on the edge of the Rio Grande.  Ruperto's father, Severiano, built his home towards the southern end of the mesa on the east side.  It appears to have had a room made of stone and at least one room made of adobe.  Homes in those days in the area were very small. The Rio Grande is just a few feet away on the other side of the small mesa from the Severiano home.

Ruperto Married Angelita in 1901.  Even though they were married in Ojinaga, Ruperto never lived in Ojinaga.
Ruperto farmed in La Coyota.  When he was about 31 years old in 1908 he bought the tract of land where La Coyota was located, section 9 of Block 16.  At some point Ruperto built his home at the south end of the mesa around the corner from the Severiano home.  In the 1930's there was a flood of the Rio Grande and Ruperto's home was damaged.  Probably not ever wanting to undergo having his home flooded again, Ruperto built his next home atop the mesa.  today there are faint remnants of the foundations of two homes on the top of the mesa.  Bob Wirt determined in his research that one home belonged to Jesús García and the other belonged to Ruperto, but it is not known which is which.

There was no official government for the settlement, but Severiano had played a leadership role.  After his death in 1925 it appears that his oldest son, Ruperto, was looked upon as a leader.  Below is a photograph of Ruperto hosting a couple of Texas Rangers at his home. 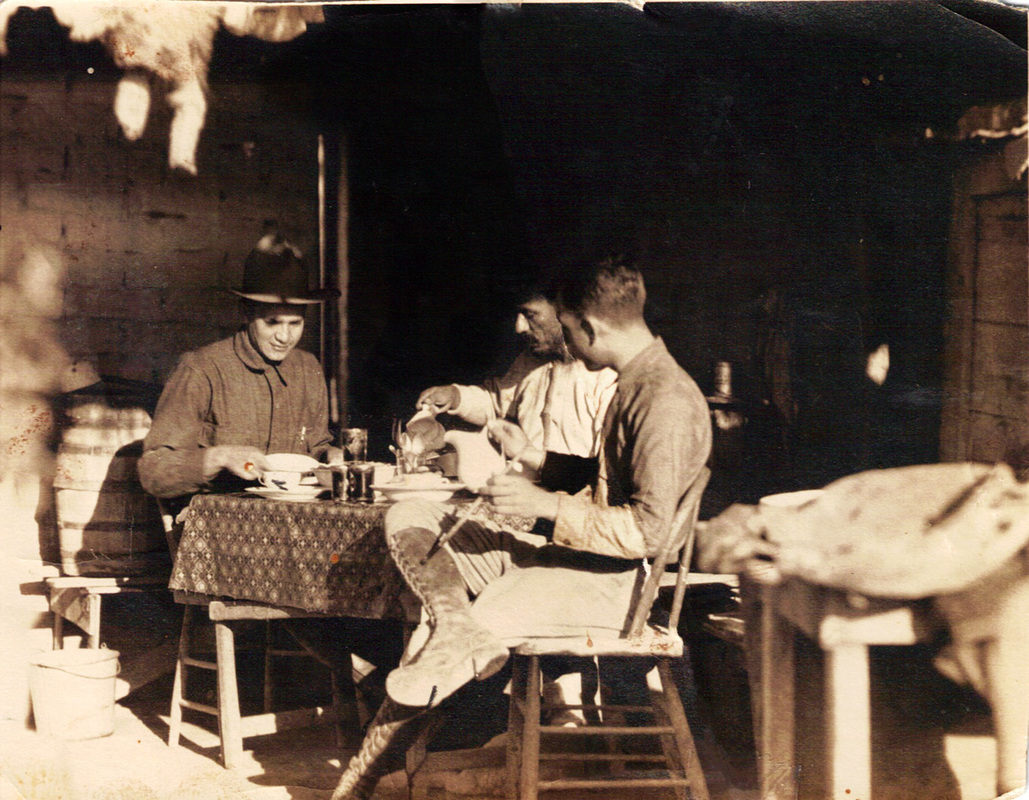 Ruperto Chavarría with two Texas Rangers at his home in La Coyota.
The information on this page comes from several family sources but principally from Louisa Madrid and from Bob Wirt in his Documented Research Report on Romaldo and Severiano Chavarría which can be read at Bob Wirt's Web site Life Before the Ruins.  Family Search has a record for their marriage.
NOTE: The marriage document records Ruperto's place of birth as Comanche, TX.  It was common to refer to Fort Stockton as Comanche.
Go to Chavarria Discussion