Severiano Chavarría
Severiano Chavarría married Rita Ramírez
on 7 Feb 1876 in Fort Stockton, TX
Location of Marriage record on FS is at
https://www.familysearch.org/ark:/61903/3:1:3QS7-994V-TKTH?i=24&cc=1803985
Severiano and Rita had sixteen children including two sets of twins.

The first four children were born in Fort Stockton, Texas.

The other twelve children were born in La Coyota, Texas. 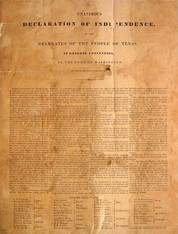 The Chavarría Story:
The Texas Republic became a state of the United States in 1845.  So Texas had been part of the US for about 14 years when Rita Ramírez was born May of 1859 but what is now Pecos County was part of Presidio County at that time. Records show her birthplace as "Presidio" Texas.  The use of the county to designate birthplace was not unusual when the birthplace was a settlement or town without a post office or other governmental recognition.  So the designation of her birthplace as "Presidio" likely refers to the county she was born in, but her family likely was living in what was then known as St. Gall and is today's Fort Stockton.
According to the Texas State Historical Association:  "The land of Pecos County was originally in Bexar Territory and later part of Presidio County. Pecos County was established by the Texas legislature in 1871. The county was formally organized on March 9, 1875, at St. Gall, which became the county seat. There were 1,100 people living in the county that year.  So Rita Ramirez was 12 years old when Pecos county was established and 16 years old when it was formally organized (became fully functional).
Rita married Severiano Chavarría in Fort Stockton where their first four children were born.  Rita's next older sister, Donaciana Ramírez, who was born in Mexico, married  Severiano's brother, Romaldo Chavarría.  Both the Ramírez and the Chavarría families were living in Fort Stockton.

Severiano and his brother Romaldo Chavarría came from Mexico.  Severiano was born in San Pablo Meoqui.
The area of San Pablo Meoqui and San Antonio Meoqui were referred to by Severiano as "Meoquis" when he told his grandson, Manuel Franco, where he came from in Mexico.  There were families living in the area known as Junta de Los Rios (modern day towns Presidio/Ojinaga) for a long time.  So many ancestors of Terlingua residents had been there a long time.  But Meoqui, Julimes (about 11 miles north of Meoqui), and Delicias, Parral, and Valle Allende seem to be where many other ancestors of Terlingua residents came from.
Family Oral Tradition:
Manuel Franco, grandson of Severiano, said Severiano had told him that one of his grandfathers was full blooded Native American. Severiano was a carpenter and said he built some of the early houses in Fort Stockton.
Between May 30, 1884 and April 29, 1885, the Rita and Severiano family moved to the Big Bend area and are believed to have started La Coyota, Texas, a small settlement on the west bank of Willow Creek (also known as Alamo Creek) about two miles up the Rio Grande  from Castolón.  Severiano and Rita's remaining twelve children were born in La Coyota.  [Click here to see a map of the Castolón area.]  Bob Wirt and Louisa Madrid wrote in their Marcos Ramirez Documented Research Report "Severiano brought his family to the Castolón area from Fort Stockton around 1885 and settled at a site that later became known as La Coyota, about two miles west of Castolón.  He was the earliest known settler in the area."

There is a report in the Texas State Historical Association's handbook of Texas online that tells how the area developed out of the economic activity in Castolón.  However it erroneously states that Ruperto Chavarría led the group that started La Coyota, but in fact, Ruperto was only about eight years old when his father, Severiano Chavarría moved the family from Fort Stockton to the area.  Rita moved back to Fort Stockton about 1938 because her death record states that she had been living in Fort Stockton for three years when she died.  So Rita was born 1859 in Ft Stockton, she lived there and married Severiano in 1876.  They had their first four children there.  Then when Rita was about 25 years old they moved to what is now the Big Bend National Park and, according to Bob Wirt, they were founders of the settlement of La Coyota.

It is interesting that the 14th and 15th sons were twins and were given the same name: "Pablo." They were known by their nicknames "Pablo Chiquito," Little Pablo and "Pablo Gordito," Chubby Pablo. Around1950 Pablo "Chiquito" and his wife María Morales moved to Fort Stockton from Alpine where they had been living. It is not known when they left La Coyota for Alpine. 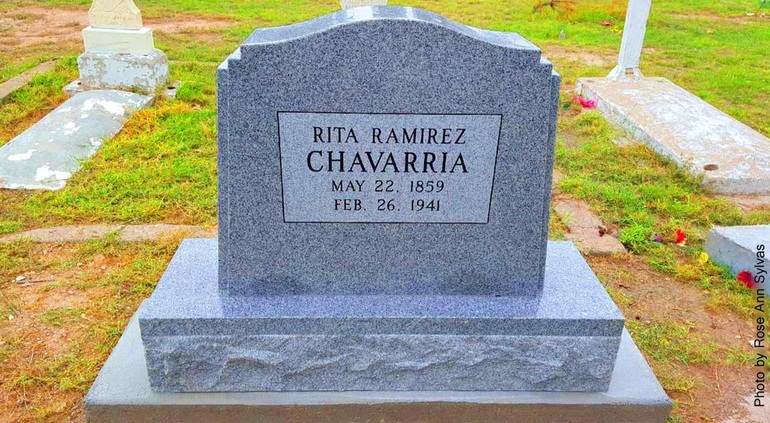 Rita Chavarría's tombstone was installed in October 2015.
Rita Franco Sanchez, who was named after her grandmother, Rita Ramírez Chavarría, had wanted to place a tombstone at her grandmother's burial site in St. Joseph's cemetery for a long time.  The problem was that it had been decades since anyone remembered where Mama Rita (as she was called by her family) was buried.  St. Joseph's rectory was built right next to a creek and at one point there had been a flood that destroyed the church records with the burial plot's information.
Go to La Coyota 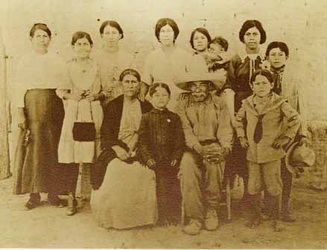 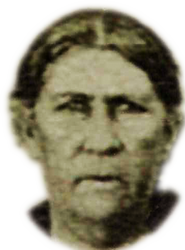 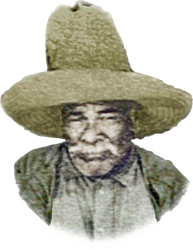 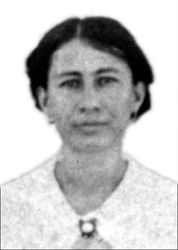 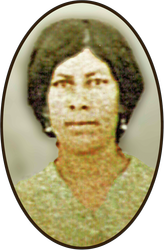 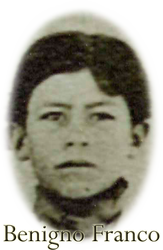 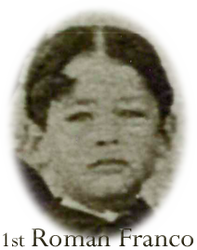 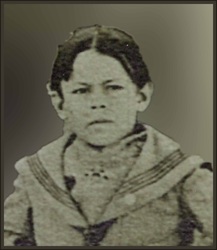 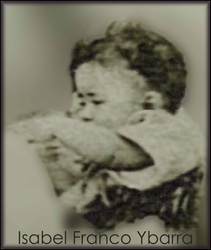 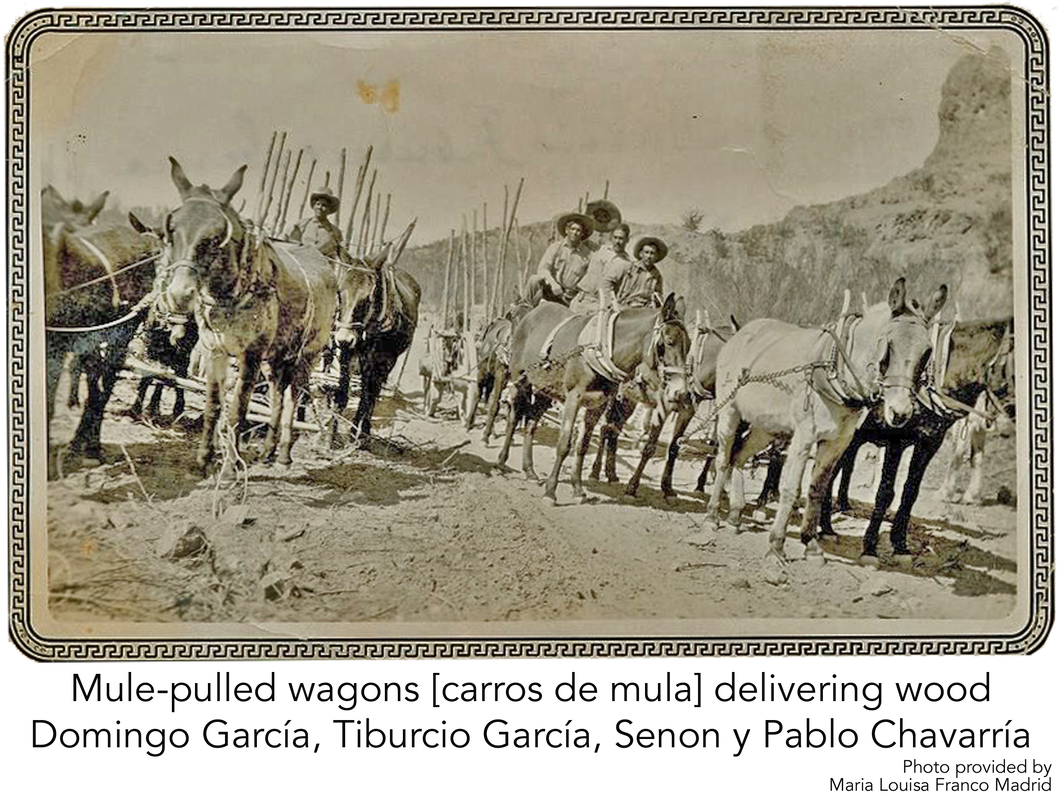 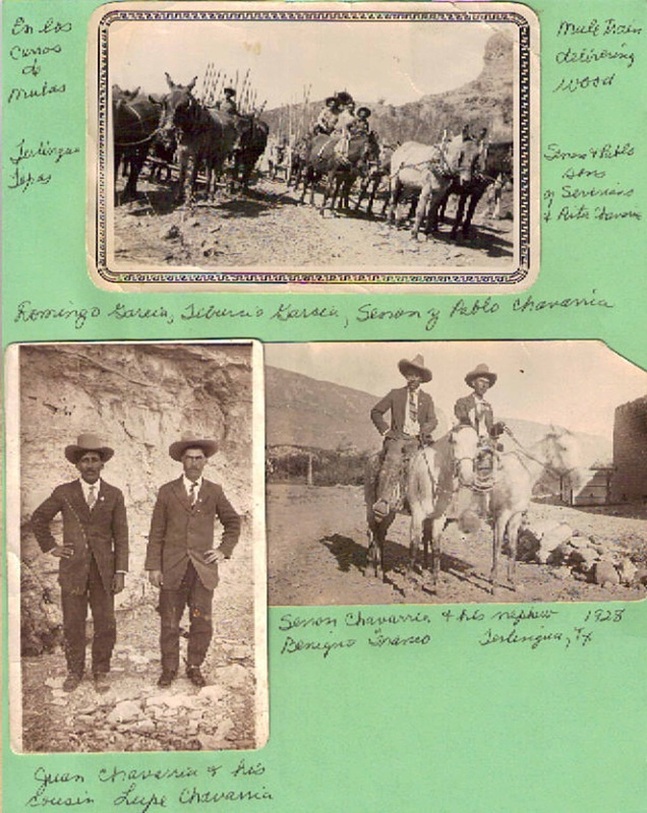 Acknowledgements:
Louisa Madrid and Bob Wirt provided the information for this page largely from their Marcos Ramirez Documented Research Report.

Click here to go to the Chavarría Discussion Post in Familias de Terlingua.
Family Search
Minor editing to clarify the story was done on December 17, 2022.
Minor updates to this page were made to correct incomplete information and add clarifying points on May 15, 2018.
Chavarria Discussion Page