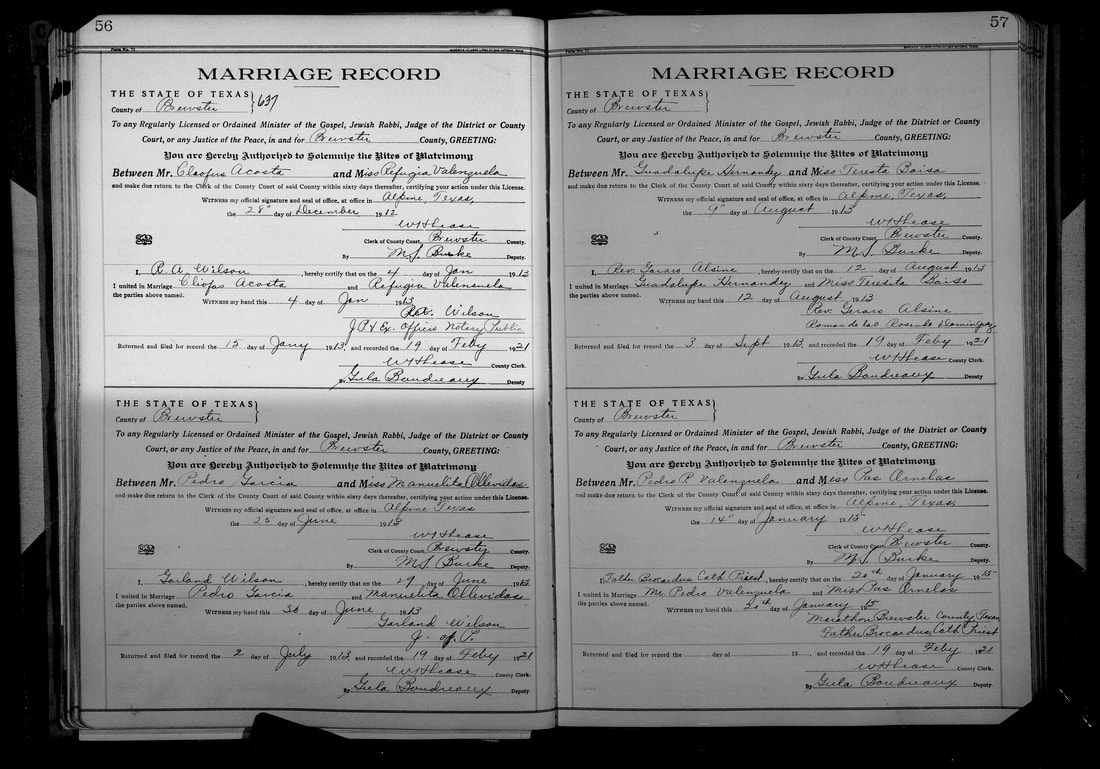 Years later Cleofas was to marry Refugio Valenzuela, and his niece, Josefa (fourth child of Luis and Pomposa's) married Felix Valenzuela. He lived in the Terlingua area from 1897 to 1934.

[Research Note: the question that remains to be answered is whether Refugio Valenzuela and Felix Valenzuela were related.  It seems likely they are related but we have not found documentation on Refugio's Valenzuela other than her death record.


The 1900 Census provides some interesting clues.
Sheet 9 took 4 days to be enumerated: June 7,8,9,&11 of 1900.  This may be that the places were very far apart and with few people at each place so it took him four days to fill one sheet. Sheet 9 has Guadalupe de la O on line 4 [Cruz Rey & Alberto de Leon lived with the family as servants]
Sheet


At the time of the 1900 census Josefa was 8 years and three months old and living with her parents Luis and Pomposa Baeza. The census sheet they are enumerated on is sheet 11.  If we look at the enumaration dates for sheets Her birth certificate says she was born in Redford so is this census sheet enumerating Redford or a another place closer to La Coyota.  The question arises because the next sheet, sheet 12, includes includes known residents of La Coyota. Both of these sheets were enumerated on the same day, June 16.  But the sheets before and after these sheets are one day before (June15) and    [Research Note: Since two persons from Cleofas' household married Valenzuelas, it would be interesting to look at the 1900 Census sheets near sheet 11 to see if there were Valenzuelas living nearby. This could help locate Refugio Valenzuela's parents. Note that Refugio is often referred to as "Refugia" or even "Refujia." To look for a Valenzuela neighbor on FamilySearch.com start with the place where sheet 11 is found which is  image 22 of 28 www.familysearch.org/ark:/61903/3:1:S3HT-6LW3-62G?i=21&cc=1325221 Also note that sheet 12 has Severiano Chavarria's family.  They lived in La Coyota.  So sheet 11 is probably the last census sheet for Polvo/Redford].

In 1910, still in the Terlingua area, Cleofas was working as a freighter. According to the 1910 census, Santos Luján, age 26, and Victoriano Luján, age 20 were living with him. Both were shown as hired men with an occupation of teamster.

From 1921 onward, Cleofas was a voluntary participant in the Chisos Mining Company’s “health insurance” plan. He paid $1.50 per month to the Physician’s Account. In return, any doctor’s fees or medicine for him and his family were provided free of charge. Some historians have characterized this plan as unfair, mainly because the miners were required to participate. However, many non-miners associated with the company participated voluntarily (and actually paid a slightly higher fee than most of the miners), suggesting that many thought it was a good deal.

Cleofas married Refugia Valenzuela 4 June 1913. She was born in San Carlos, México circa 1890. Cleofas died 15 April 1934 in Terlingua of chronic myocardites. From July 1933 until his death he was attended by Chisos Mining Co. physician Dr. E.A. Montenyohl. He was buried in the Terlingua Cemetery on 16 April 1934. Refugia moved to Alpine soon after her husband’s death. She died there 30 March 1955 of apoplexy and was buried in the Alpine Mexican Cemetery (Holy Angels) the following day. Cleofas and Refugia had seven children: 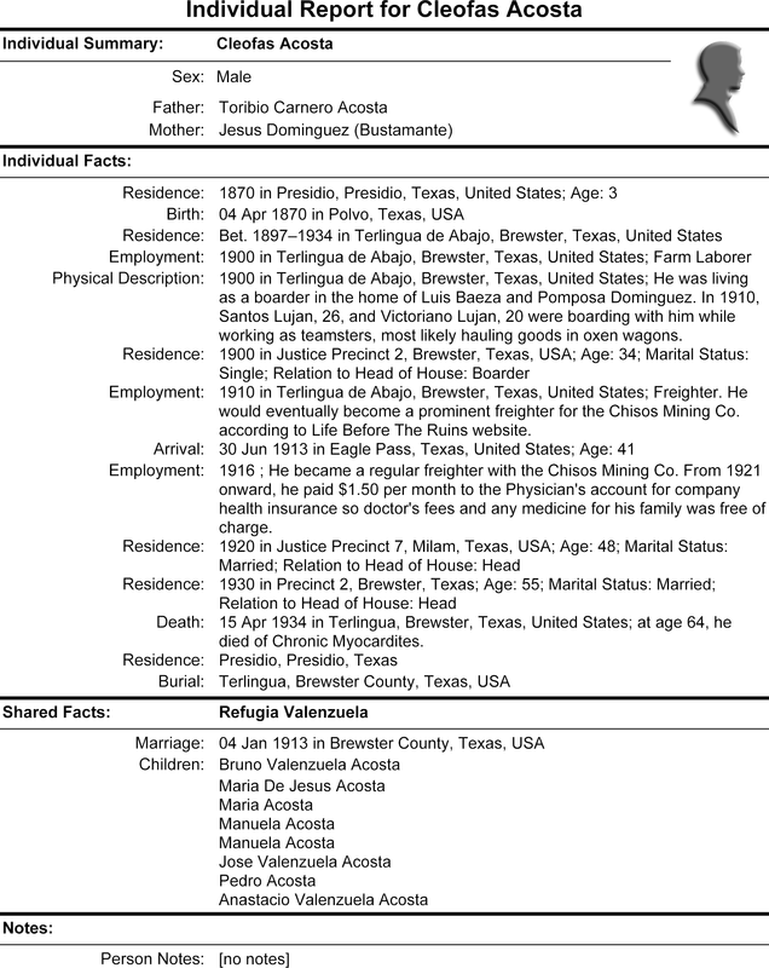 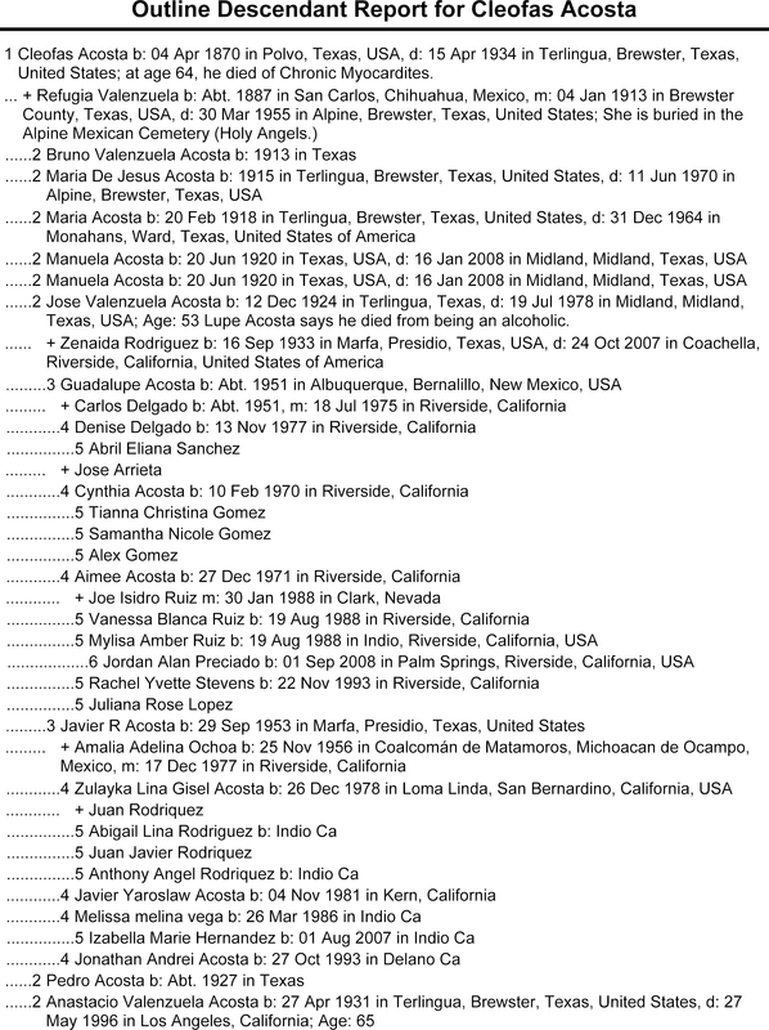 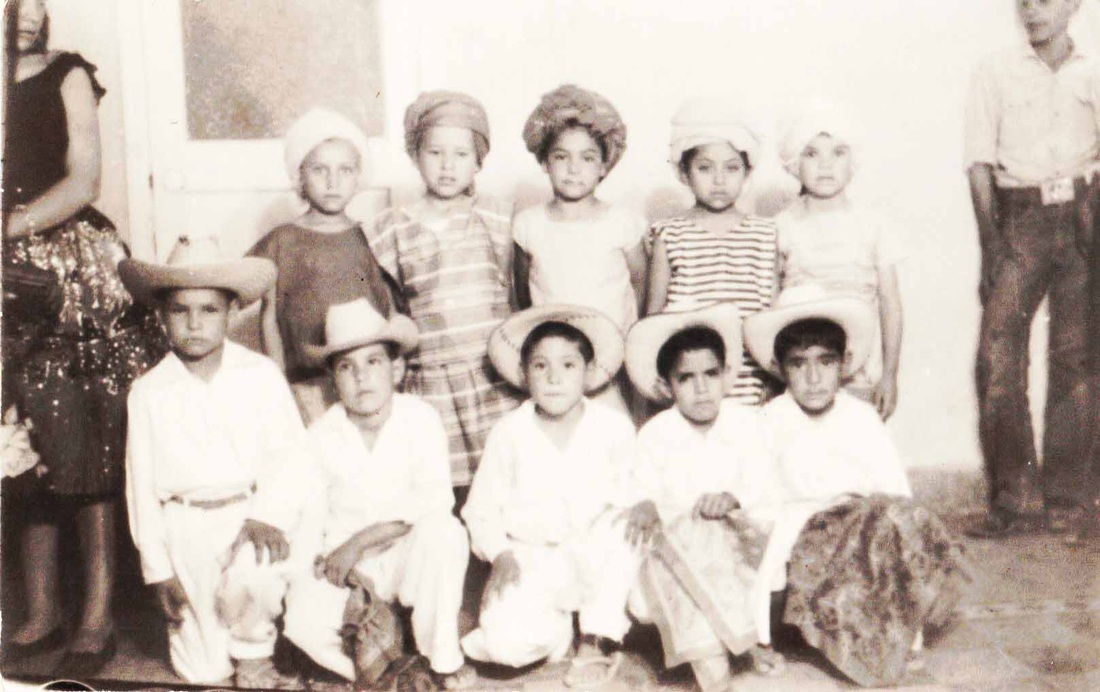 "I started my family history research without any experience in 2009/2010. Since then, I have been overwhelmed with never ending information, but none of it came easy. Some days, I stayed up until 4am because of the joy I got from finding new information. The biggest breakthroughs came from Amalia Adelina Ochoa's research, Ancestry.com, and websites including Life Before The Ruins, Prima Elisa's Blog, and Familia's de Terlingua.

One of the main differences from the information on Life Before the Ruins is the "first" ancestor. It is written as Francisco Acosta, which may very well be the correct name, however on Ancestry.com, I found sources that say his name was Pedro de Acosta. Most of my information on the Terlingua Acosta's was learned on Life Before The Ruins and sourced on Ancestry.com.

Cleofas Acosta, my great-great grandfather, is buried in the Terlingua Cemetery (http://www.findagrave.com/cgi-bin/fg.cgi?page=gr&GSln=AC&GSpartial=1&GSbyrel=all&GSst=46&GScntry=4&GSsr=2121&GRid=84866304&)."  Vanessa López
The information and photographs on this page were provided by Vanessa López and Bob Wirt.
Additional research on FamilySearch.com provided additional material.
This page was created July 22, 2014.
This page was last update November 2019.