Félix Chavarría married Paula Galindo
July 28, 1919 in Eddy County, New Mexico
They had eight children:
Note: Click on the given names below to go to their respective families.
Their story:
Felix was born in May 1894.  Records show Felix and Paula were born in Castolón which had a US post office and was officially recognized, but it is quite likely that they were actually born in La Coyota a small settlement with no official designation about two miles west of Castolón right on the edge of the Rio Grand which is to its west and the Alamo Creek on the east separating it from La Coyota's cemetery.  Today La Coyota is inside Big Bend National Park.  Felix' parents had moved to La Coyota around 1884 from Fort Stockton and were among the original settlers of La Coyota.

Paula died of liver cancer May 13, 1938 in Rotan and is buried there. Felix died of uremia in Hall-Bennett Hospital, Big Spring June 15, 1970 and is buried in Mt. Olive Cemetery, Big Spring. 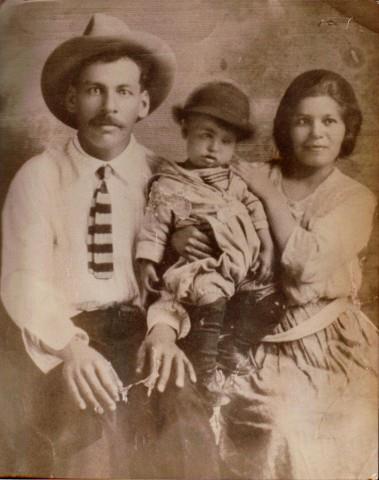 Note: Manuel had only two sons both named Manuel by different mothers.

Manuel Galindo Chavarría had second son by a different woman also named Manuel.
Alicia Chavarría Williams sent an email on Feb 8, 2012 quoting Manuel Ruiz Chavarría "I have a brother who is also Manuel
Chavarría, he lives in Big Spring Texas.  I just found him. we have different mothers, but are Manuel's only children (that we
are aware of). Our father has since passed, he was Felix & Paula's oldest son, I live in Little Rock Arkansas."

Manuel Galindo Chavarría, Sr. married the widowed Guadalupe Cervantes January 28, 1966 in Big Spring.
She was born October 8, 1922 in Marfa. He died in Big Spring May 15, 1983 and she died there October 31, 2004.
They are buried next to each other in Trinity Cemetery.
Manuel Galindo Chavarría and Guadalupe had one child:
(1) Alicia Chavarría was born October 21, 1950 in Big Spring.
Alicia and Arthur Morales had one child:
a. James Lee Morales was born August 20, 1967 in Big Spring. He is retired from the U.S. Air Force.
In July 2012 was living in Albuquerque, New Mexico and working as an instructor for Lockheed.
James has one child:
aa. Katelyn Leigh Miller.

Alicia married Dennis Kregg Miller on March 22, 1968 . They were divorced in 1973. Alicia and Dennis had one child:
a. Kennith Bryan Miller was born October 5, 1969 in Big Spring. He married Desiree Dyer.
In July 2012 they were living in Louisville, Kentucky where Kennith was working for General Electric.
They have two children:
aa. Daughter Brooklin Tate Miller was born December 9, 1998.
bb. Daughter Carmen Page Miller was born March 14, 2001.

Alicia married Larry Williams on June 2, 1982. They met and were married in Yokota, Japan while serving there with the
U.S. Air Force. Both Alicia and Larry are retired from the U.S. Air Force and in July 2012 were living in Little Rock, Arkansas.
They have two children: a. Kimberlee and b. Johnathon Thomas
a. Daughter Kimberlee Ann Williams married Evan Schmidt in May 2010.
Kimberlee had two children before their marriage:
aa. Daughter Kaylee Marie Light was born January 4, 2002.
bb. Son Rylan Lee Light was born May 2, 2004.
Kimberlee and Evan Schmidt were living in Cabot, Arkansas in July 2012. They have one child:
aa. Daughter Mattie Lynn Schmidt was born November 22, 2010.
b. Johnathon Thomas Chavarría Williams was born October 19, 1987. He married Elin Eager on Bremerton Naval Base
in Washington. Both were serving in the U.S. Navy at that time, and Johnathon was assigned to the aircraft carrier USS
John C. Stennis, CVN 74. He was disabled while on active duty in the Afghanistan War.
In July 2012 Johnathon and Elin were living in Colorado Springs and were attending the University of Colorado.
Their children are:
aa. Desmond Cade Williams (son) born 1-22-2015
bb. Juliette Cadence Williams (daughter) born 1-09-2019
2.   Edward “Lalo” Chavarría was born February 12, 1926 in the Terlingua area.
Edward aka Eduardo died on June 23, 1976 in Hall-Bennett Memorial Hospital.
Eduardo married Sarah Brito.
Sarah Brito was born February 12, 1926 in Midland, the daughter of Evaristo and Braulia Brito.
Sarah died in Big Spring September 9, 2006.
Both Eduardo and Sarah are buried in Mt. Olive Cemetery, Big Spring.
Edward moved to Big Spring in 1950 when he was in his twenties. He spent most of his adult life in Big Spring, where he worked as a
meat  cutter in a beef processing plant.
Edward and Sarah had eight children:
(1)  Paula Chavarría was born February 6, 1947 in Midland. She died in Big Spring December 25, 1996.
Paula's married name was Villarreal.
(2)  Yolanda Chavarría (married name Villareal) was born October 28, 1949 in Big Spring.
Yolanda died Saturday, May 20, 2017, in Midland at the age of 65.  ﻿﻿﻿﻿
(3)  Olga Chavarría was born in Big Spring July 1, 1951. She was living in Big Spring in September 2006.
(4)  Edward Chavarría, Jr. was born in Big Spring October 19, 1952. He died in San Antonio July 9, 2004.
(5)  Albert “Beto” Chavarría was born in Big Spring November 18, 1953 and lived there all of his life.
Albert died in Medical Center Hospital, Odessa January 31, 2012.
He worked as a roustabout in the oil fields.
Albert had two wives.  His first wife was Dorothy LaRue Hestor.  His second wife was María Holguín. 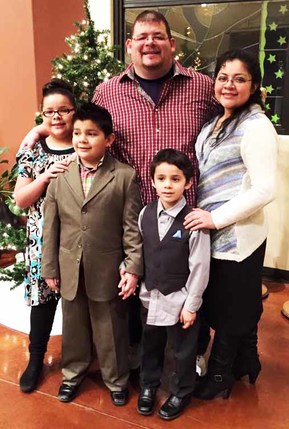 After the death of Pedro, María Gloria had one child:
(1)  Daughter Angelique Michelle Gómez was born May 25, 1969 in Big Spring.
She married William Latimer November 20, 2007 in Big Spring and in July 2012 they were living in Big Spring.
The information and images for this page came from family members Alicia Chavarría Williams, and Alberto Chavarría Jr.
and Bob Wirt's site Life Before the Ruins.
This page was updated June 1, 2016, April 1, 2018.
This page last updated March 22, 2018