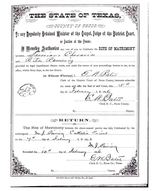 Click to expand
Severiano Chavarría and Rita Ramirez were married in Fort Stockton in 1876. Their marriage license was issued in February 1876 by Pecos County.  Pecos County was not even a year old when Severiano and Rita got their marriage license.  At that time the county seat was called Saint Gall.  It was not renamed to Fort Stockton till five years later in August of 1881.  It may seem confusing because the fort called Fort Stockton had already been there.  The town next to the fort was called Saint Gall.  Later the town was renamed Fort Stockton and the Fort ceased being an active fort so "Fort Stockton" referred only to the town.  There is some evidence that some people lived around the Comanche Springs but not in Saint Gall.  This might explain why many people used to refer to Fort Stockton as "Comanche" or "Comanchi."  See a discussion on the name "Comanche" at http://www.familiasdeterlingua.com/6/post/2009/11/index.html


According to the Texas State Historical Association:  "The land of Pecos County was originally in Bexar Territory and later part of Presidio County. Pecos County was established by the Texas legislature in 1871. The county was formally organized on March 9, 1875, at St. Gall, which became the county seat. There were 1,100 people living in the county that year.

According to the Texas State Historical Association: "In 1868 Peter Gallagher bought the land that included the military garrison and Comanche Springs, platted 160 acres for a townsite named Saint Gall, and established two stores at Comanche Springs. Later, Gallagher and John James purchased 5,500 acres along Comanche Creek. By 1870 the Saint Gall region had a population of 420 civilians, predominantly Irish, German, and Mexican Catholics who had come by way of San Antonio. The first church in Saint Gall was Catholic. When Pecos County was organized in 1875, Saint Gall became the county seat. The name, however, was never popular with the citizens, and on August 13, 1881, it was changed officially to Fort Stockton."

Although the quote above says that "420 civilians ...had come by way of San Antonio" as Peter Gallagher himself did.  But that is not likely true for the "Mexicans."

So Rita and Severiano were married when the town of Fort Stockton had been in existence for only 18 years.
This copy of their marriage license issued by Pecos County in February of 1867 was provided by Maria Louisa Madrid who obtained it at the Pecos County offices.

Go to the Severiano Chavarria page