Recuerdo - The Life of Leonardo Pando
A remembrance written by Leonardo Pando's daughter, María Isabel Pando.
__In fact, the only memories I have of him discussing his childhood was about him telling us that he did not always have shoes.  He would say that if he did have shoes, he would take them off so he could run faster.
_
He would talk about how he would bootleg from Mexico.  He would travel through the Big Bend country with horses or mules.  At this time he was known as El Chamaco. Leonardo or ‘Nardo, as some of his sisters called him, would say “nothing ever happens to me.  I always prayed,” he would say.  “One night I went to sleep somewhere out in the mountains and when I woke up the ground was covered with snow.  I had been dreaming that I was talking to Mary and Joseph.”  That was something that he always stressed, “you need to pray a lot.”  As a matter of fact, one way to discipline me was to tell me to kneel before an altar to ask for forgiveness and to pray.

He was a man who had very strong opinions.  He was friendly and liked people very much.  He said there was a way to talk to every person; he would even model the way one should stand before a person.  If it were a child or an adult he would indicate how one should stand.  He always stressed that one should always speak properly, he did not like for me to use slang.  He had many friends.  Both young and old liked him.  He welcomed everyone into his home.  He loved to drink coffee, so everyone was invited to drink coffee.  He liked to get up early in the morning, and it was not unusual for him to get up at 4:00 or 4:30 in the morning.  He would drink at least two pots of coffee before going to work.  He would always say, “In the morning your mind is fresh. One can think better.  The mind has rested all night.”

He loved to whistle and sing songs (corridos).  Some of the songs he sang were about the revolution of 1910 and of events that happened.  He liked to listen to radio programs, the news and novelas.

He was a very hard-working man.  Most of his life he worked on ranches.  He would milk cows, brand cattle, ride horses, tame horses, and rope both for work and at rodeos.  He was short, about 5’ 4” and was often called Chapo by his bosses.  Other people simply called him Pando.  He enjoyed competing in rodeos around the area.  At that time many of his friends were people who enjoyed rodeos.  People like Salomon Ramos, his compadre and town barber, Benito García, from Marathon, Nito Martínez from Fort Davis, Lucas Aguirre from Marfa, these were some of his rodeo buddies.  Leonardo had a horse named Happy that he used in rodeos; he had him for a long time.

He had dark curly hair, and eyes that gleamed with curiosity.  He was a very proud man.  As he got older he would dye his hair black.  He always wore western shirts, Levi pants and cowboy boots.

He always went to Mexico to visit his relatives.  His mother, Marcelina, lived in La Hacienda de Orientales.  He would go visit her two or three times a year.  He would take her food and money.  When his mother moved to Ojinaga, he would go more often to see her.  He always stayed in touch with all his family.  To many of his nephews and nieces he was their favorite uncle.

This article written by his daughter, María Isabel. 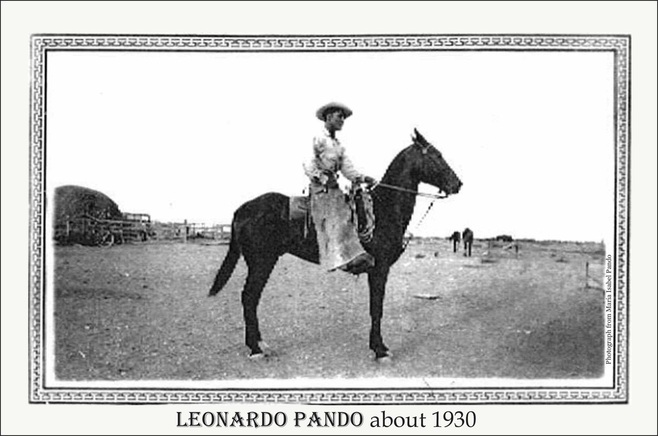 This remembrance and photos were provided by María Isabel Pando.  Leonardo Pando's great ability to break and ride horses is mentioned in a corrido in More Tales of the Big Bend by Elton Miles pages 58 - 62.
Back to Our Stories  |  Leonardo family  | Discuss story