The Antonio Franco ranch home had two distinctive arches in the front. Because of these arches family members called it "El Rancho de los Portales" or simply "Los Portales" according to what Natividad Franco Ybarra, Jr. learned from his mother Isabel Franco Ybarra.  Antonio wanted to build a home like one he had seen in Mexico -- probably in the Meoquis/Julimes area in the state of Chihuahua about 40 miles south east of the City of Chihuahua on highway 45.  He hired Alvino Ybarra to build him a home like the one he had seen in Mexico.  In 2011 on a visit to the ranch ruins, Big Bend National Park archaeologist, Tom Alex, remarked on the high quality of the adobe (probably a lot of straw) to have withstood weathering the way it had compared to other ruins of similar age.

﻿You can click on the images on this page to see them magnified so you can see details.﻿ 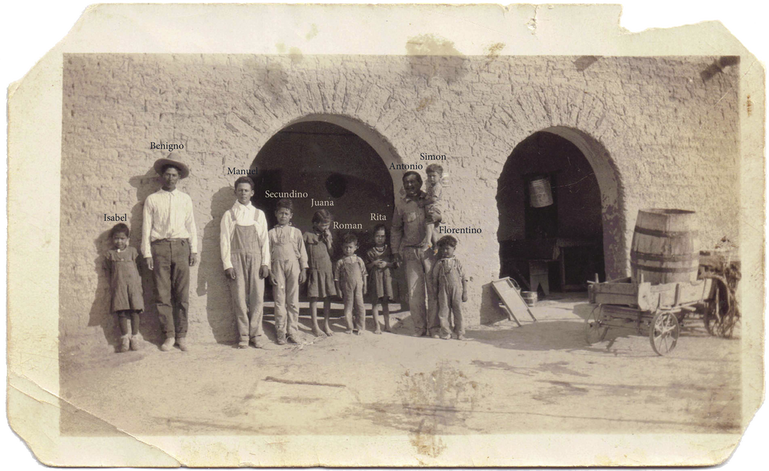 This is the Franco home in 1924 or 1925.
Simon Franco in the arms of his father was born Jan 5, 1923.
An interesting feature of the house is the entrance you see behind the arches.  It was called " el zaguán." This is where the family had a table where some (all?) meals were eaten.

The zaguán has an interesting history.  Briefly, it originated in the early 1500's in Andalucía the southwestern province of Spain from which many early explorers to the New World came. (Could these Francos have come from there? Or did the Francos come from Galicia?) The word itself is of Arabic origin from the days the Moors ruled that part of Spain.  It comes from Andalusian Arabic istawán, traditional Arabic usṭuwān. But it's foundations go back to the time when the Romans ruled there and built homes with "fauces" or "vestibules."

Franco ranch home viewed facing the front -Spring of 2008; Photo by Bob Wirt
In the photo above you see the state of the ruins of the house as it was in 2008 when Bob Wirt took this photo.  In a visit to the Franco house in 2011, Big Bend National Park archaeologist, ﻿Tom Alex﻿, commented on the unusual survival of the adobe perhaps due to extra straw in the making of the adobes. 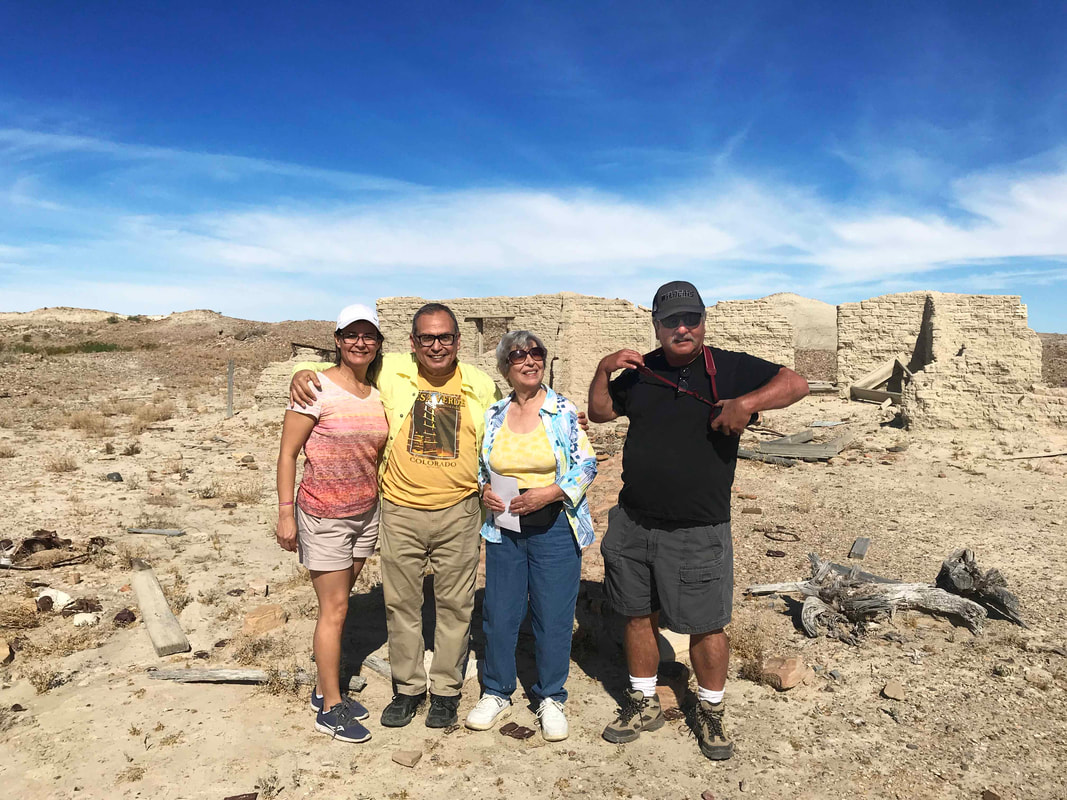 Easter Sunday March 20, 2019 Teri Franco Schock, Antonio S. Franco, Louisa Madrid, and Joe Madrid visited los abuelitos' home.  Nobody was home.  But you can read Louisa's account about visiting her grandparents Antonio and Valentina and their aunts and uncles in the 1930's by clicking here https://www.familiasdeterlingua.com/visiting-los-abuelitos.html.
To read comments on it click here https://www.familiasdeterlingua.com/comment-on-visiting-los-abuelitos/first-post. 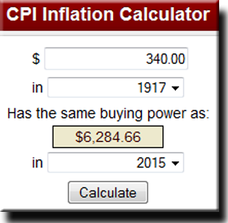 click image; go to calculator
The story of the house should begin with the acquisition of the land by Antonio Molinar Franco.  He and his first cousin Alberto Molinar were best friends. On May 5 of 1917 Antonio Franco  and Alberto Molinar each bought 200 acres of Section 38 from Aneceto Sosa and his wife Prejedes Sosa.  Antonio paid $300 for his 200 acres and Alberto paid $340 for his.  According to the CPI Inflation Calculator (try it out yourself by clicking on the image to the right and enter an amount and the two years you want to compare.) $300 in 1917 are worth $5,545.29 in 2015.  And $340 of 1917 dollars are worth $6,284.66 today. They probably had been planning this together -- perhaps encouraging each other.

Nine months later, On March 1918 they went in together and bought the remaining 240 acres of Section 38.  Alberto owned the northern half of Section 38 and Antonio owned the southern half. The Franco half is highlighted in yellow on the map below. Antonio later acquired Section 30 which is just south of Section 38.  We don't have research records on that purchase.  Perhaps our readers could help us.
We don't know where Alberto put his home, but some have suggested Alberto built his home next to the school.  The two cousins, Alberto and Antonio went in together to build the Molinar school which was on the Alberto Molinar side of section 38 but right on the border of the Antonio Franco portion of Section 38.  The school seems to be centrally located between the Paz Molinar home to the north northeast and the Antonio Franco home to the west.  The Felix Valenzuela ranch, San Isidro, was relatively close too to east.  From this it would seem that the Alberto Molinar would have also been close to the school. Perhaps one of our readers can help solve this mystery?

You can click on the images on this page to see them magnified so you can see the details. 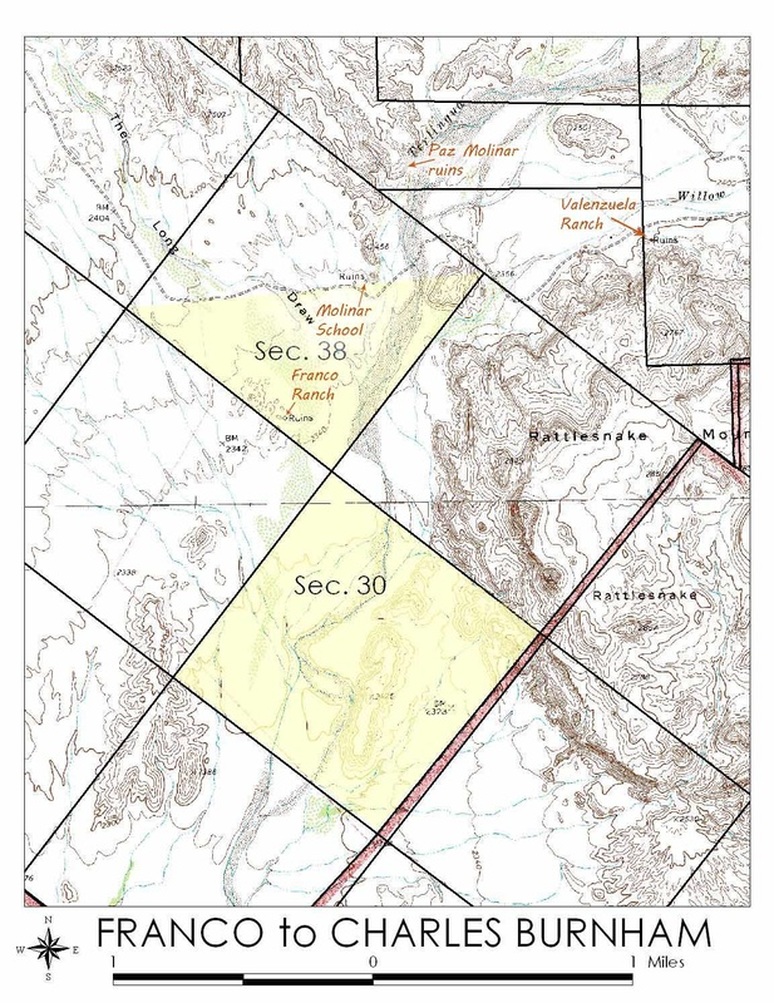 The map showing the sections 39 and 30 was provided by Tom Alex, archaeologist and author of books on the area.
his latest book is "Around Terlingua."  Photographs of Antonio Franco are in both books.

Bob Wirt says on his Web site Life Before the Ruins, Antonio  "... purchased approximately 960 acres of land along Terlingua Creek, where he build a house and farmed and raised livestock. He sold his produce to the Terlingua and Study Butte mining companies, and also hauled freight." So the the 640 acres of Section 30 plus the 320 acres of Section 38 total 960 acres. 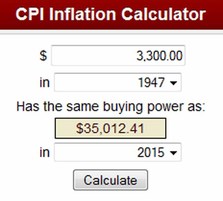 "The details of the transaction are interesting. First, in March 1947, the adult heirs conveyed the land to the youngest child, Alejandra, who was a minor. On the same day, Simon, who was Alejandra's guardian, sold the land to Burnham. Then, in April they did it all again because the original transaction mistakenly conveyed the north half of section 38 instead of the south half."  Bob Wirt describing his research into the sales records when the 960 acres were sold to Charles G. Burnham. 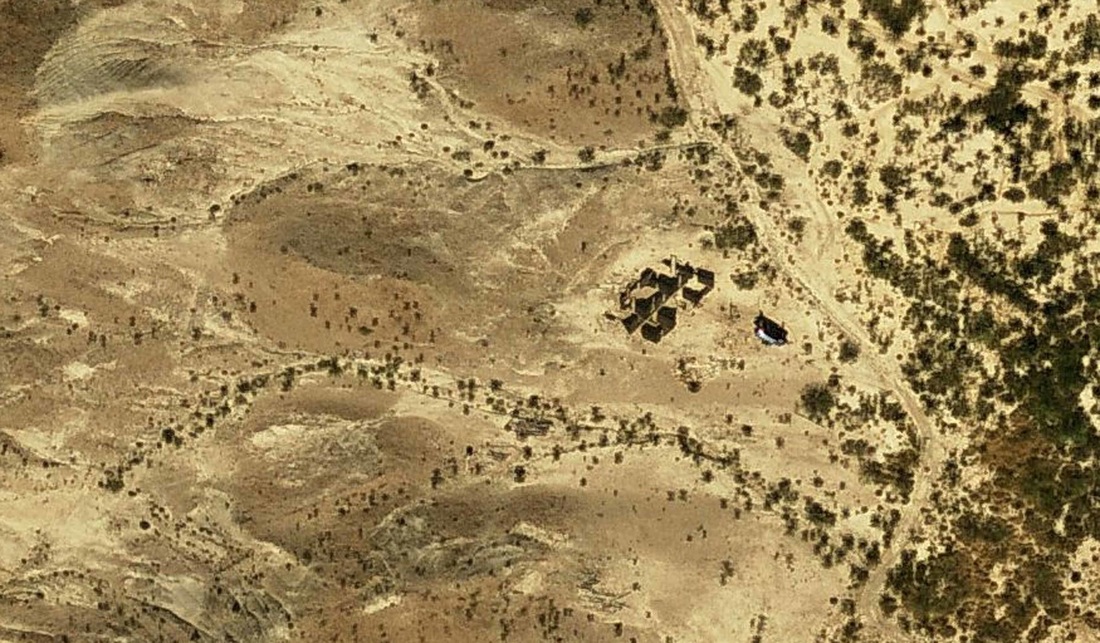 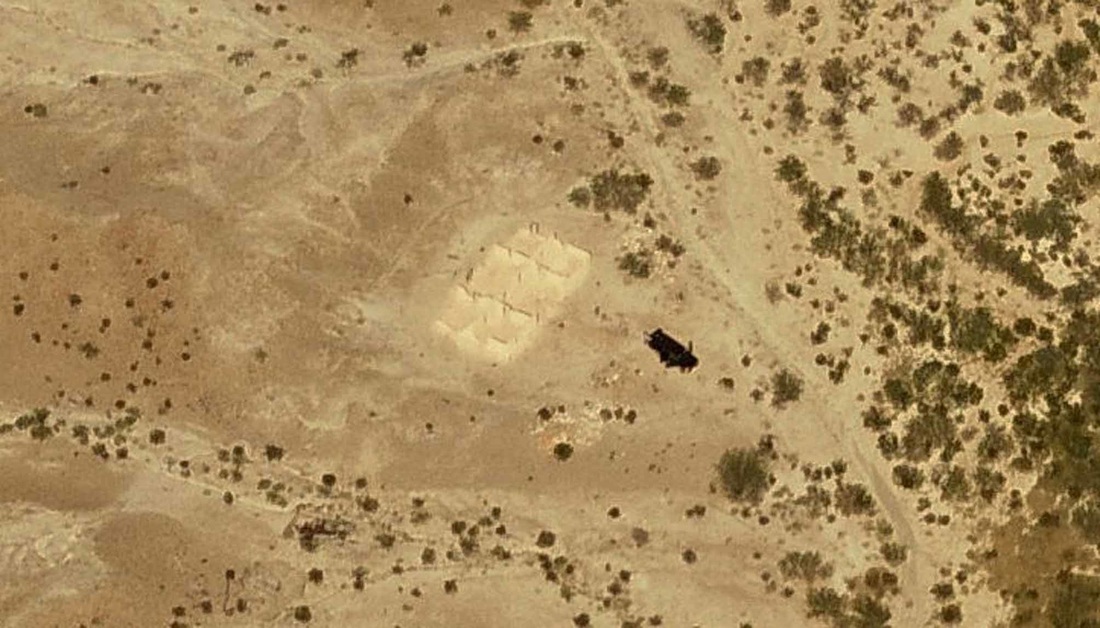 Click here to see the ranch ruins in Bing maps.

We hope to add more information to this page and the Antonio M. Franco family page.  Among the information not yet added is the story of Aleck Smith who lived on the ranch with the Franco family and was a blacksmith.
Go to Antonio Molinar Franco Family page
This page last updated July 9, 2017.