The Ceremonies
Last weekend two ceremonies, one on Sunday, February 10, 2013, and one the next day, took place in Terlingua that may in the long run have significant impact on Terlingua.  About 50 Terlingüeños were in attendance on Sunday as Antonio Esquivel and Juan Manuel Casas on behalf of the Villalba-Esquivel Family donated a 1930 Model “A” in prime condition to the school children of Terlingua   with Mimi Webb Miller accepting on behalf of the schoolchildren.   [continued below]
click on photos to enlarge them
laposadamilagro.com/Mimi Webb Miller, owner of La Posada Milagro Guesthouse and its associated Espresso...y Poco Más coffee shop in Terlingua, hosted the ceremonies at her coffee shop.  Antonio was accompanied by his sister Hermina and her son Juan Manuel Casas.  Juan Manuel Casas, author of Federico Villalba's Texas: A Mexican Pioneer's Life in the Big Bend, gave a talk about his great grandfather, Federico Villalba, who was a ranching pioneer and businessman in the Terlingua area.  Federico Villalba III, great grandson of Federico Villalba (grandson of Federico "Lico" Villalba and son of Fred A. Villalba, Jr.) was also in attendance; and he documented the day with his photography which is displayed on this page.

After the ceremony, the “stars of the show” Antonio and Herminia met with the guests; and Mimi provided refreshments for all, while Juan Manuel Casas autographed copies of his book about the Villalba family.
According to Juan Manuel, “they presented the car to children on Monday.  Unfortunately, with my tío's fragile health, we could not stay to see the children view the car.  Mimi told us they were excited.”  Mimi once more provided refreshments to the delight of the schoolchildren. [continued below]
At the La Fiesta schoolroom, Miguel would also teach the children and a few adults how to read and write in Spanish.

Antonio Esquivel was born to Miguel González Esquivel in El Paso, Texas in May of 1925, but by January of the following year his sister Herminia was born in the Villalba Rancho Barras at Burro Mesa in the Big Bend area south of Study Butte.  They would have been the right age in the early 1930’s to be going to school in this car.

After he grew up, Antonio kept the car in prime condition.  According to Juan Manuel’s account: “He had carted the car around with him for over 50 years, from Terlingua, to El Paso, California and then back to El Paso. This past weekend, he brought the car home and to the school children of Terlingua.”  We can only surmise from this that it meant a lot to him.

How It Happened
Antonio will be 89 years old in May and was thinking it was time to pass on his piece of history.  About, three weeks ago [as of Feb 16, 2013] Antonio called his sister Herminia on the phone.  In the course of their conversation he mentioned that he would like to donate the car to the schoolchildren of Terlingua.  Juan Manuel tells us what happened next.  “Mom suggested that he give me a call, that perhaps, with my contacts, I could give him a hand.  We talked and within days, I was in touch with Mimi Webb Miller a prominent citizen of Terlingua and owner of La Posada Milagro Lodge. Needless to say she was excited.

“She put the wheels in motion and in the span of three days she made all of the necessary contacts and the date for the delivery and dedication was set.”

Juan Manuel goes on to tell us that “Mimi is going to see to it that a structure is built to house and protect the car.  It will be displayed somewhere near the coffee house where all who visit Terlingua can admire the car.

Perhaps someday there will be a museum where the car and other historic pieces can be seen.”

This is an exciting possibility.  Many of us will be very interested in seeing the car.  But Antonio’s heartfelt and noble donation may mean more than we think now.  Once you build something to house it, it could be just enough of a catalyst that in the future other memorabilia will be housed with it in Terlingua itself and not 80 miles away or further.  For a ghost town, Terlingua sure is full of life … and surging. 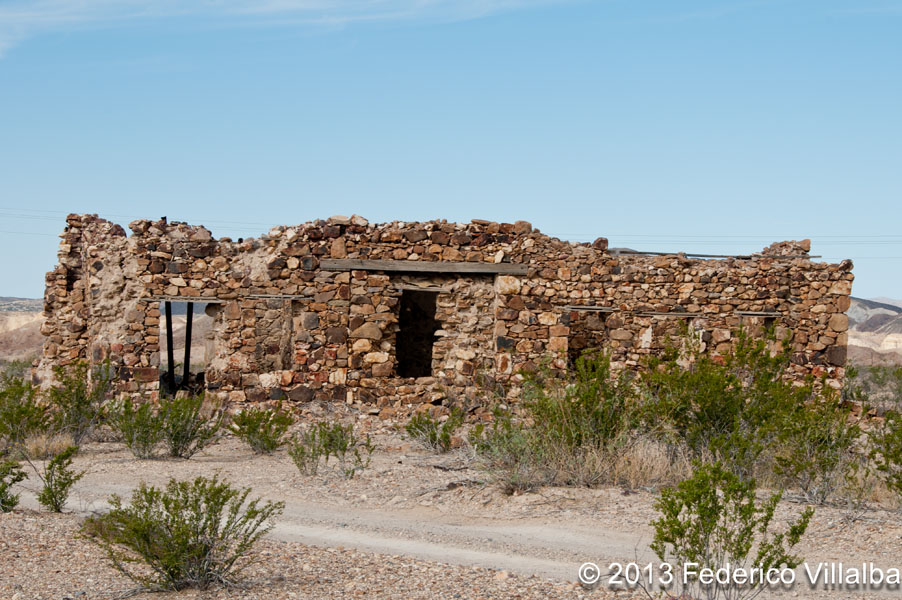 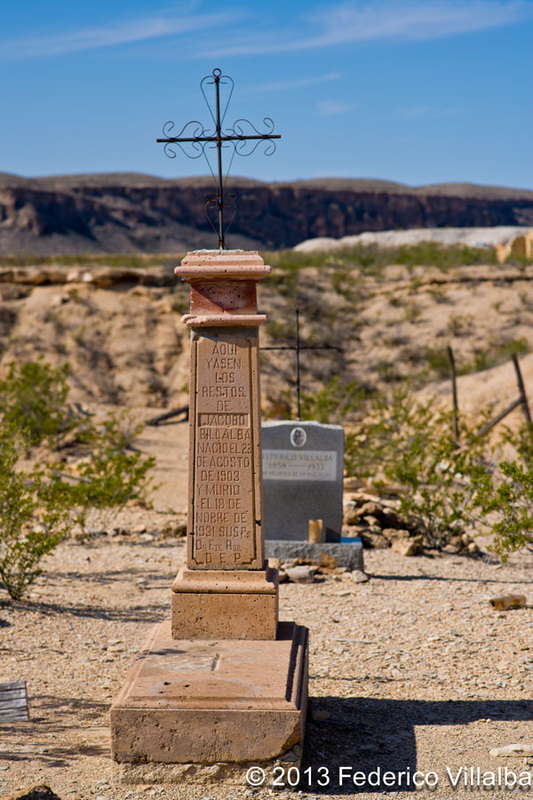 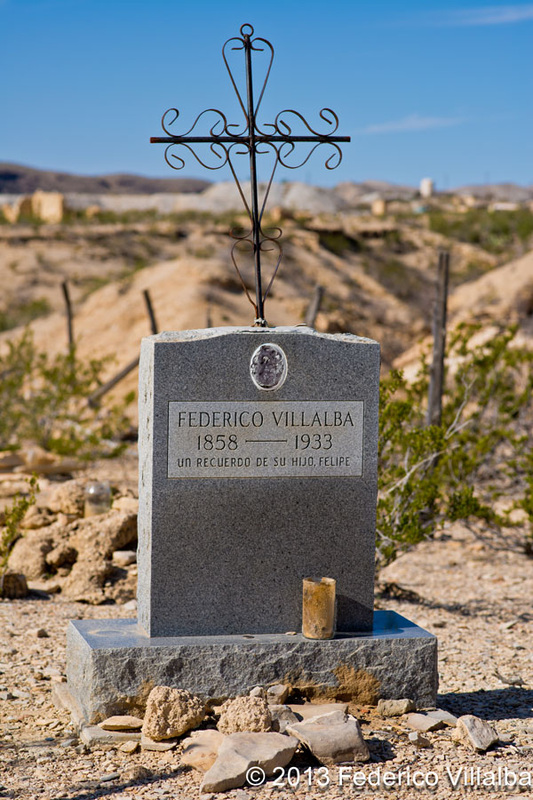 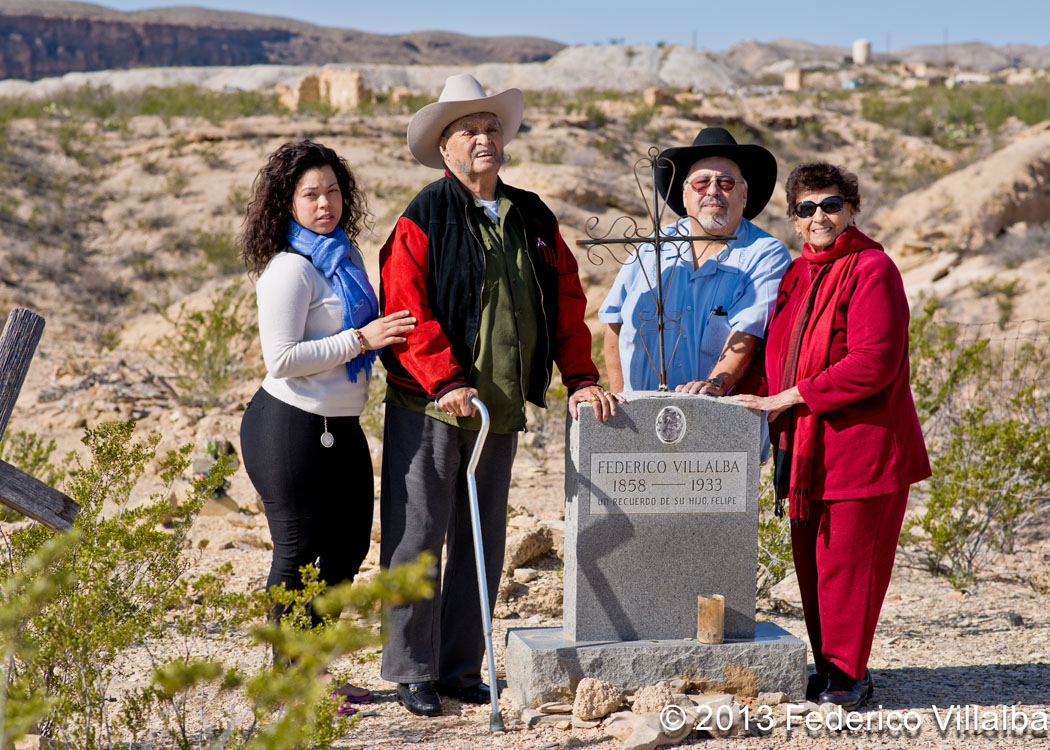 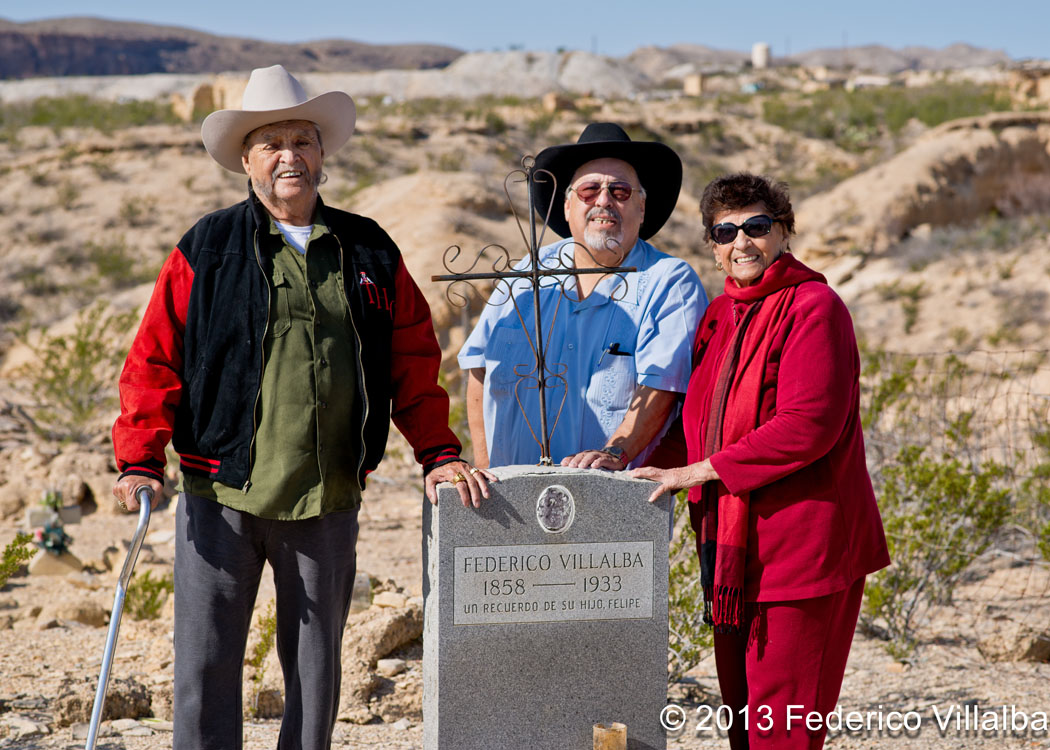 Click here to read about the car donation in the Alpine Daily Planet.
Additional Information and Links
Juan Manuel Casas is busy working on his next book, Of Kings and Cowboys, which he describes as a prequel to Villalba's Texas.  He is hoping it will be on shelves by Christmas 2013.  Look for it.

Mimi Webb Miller is owner of La Posada and Espresso y Poco Más in Terlingua, texas and a casting director in Venice California.  Yesterday (February 17, 2013) she was on CNN discussing the casting of minorities in TV commercials.  You can see two videos from that discussion here: first CNN video; and Second CNN Video

The photographs on this page were taken by Federico Villalba III all rights reserved.
The material for the story is mostly from Juan Manuel Casas.
This page was created on February 14, 2013 and corrections were made feb. 20, 2013.
Esta página fue creada el 14 de Febrero 2013; y fue corregida el 20 de Febrero 2013.