Felix Rodríguez Valenzuela
(1 of 2 siblings; go to his sister Isabel Valenzuela)
Felix Valenzuela married Josefa Baeza
on 14 Jan 1907 in Alpine before Padre Brocardus
In November of 1906 Felix wanted to ask for Josefa Baeza's hand in marriage.  Traditionally his father would formally extend the request to the bride-to-be's father, in this case Don Luis Baeza; but Felix' father, Antonio Valenzuela was apparently already dead so Felix turned to his brother-in-law Francisco Ortiz to act in Antonio Valenzuela's place and ask for Josefa's hand in marriage. 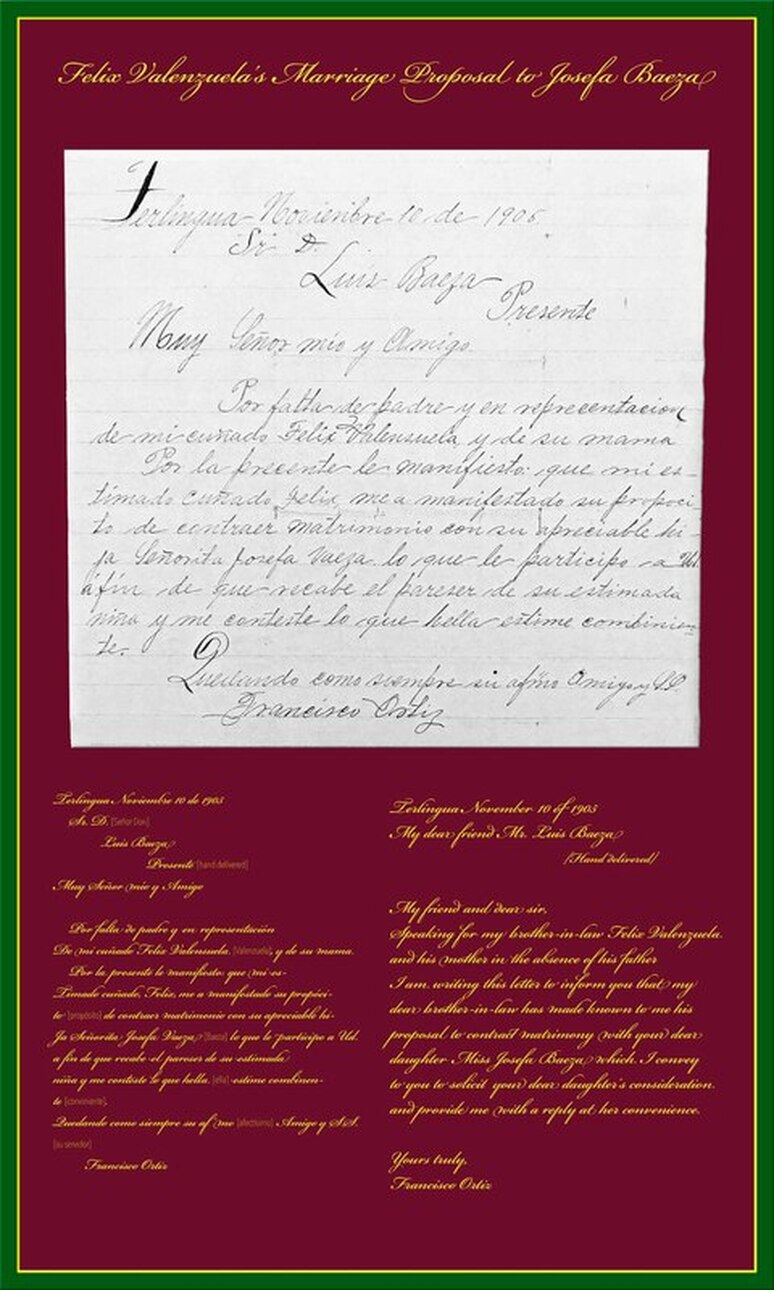 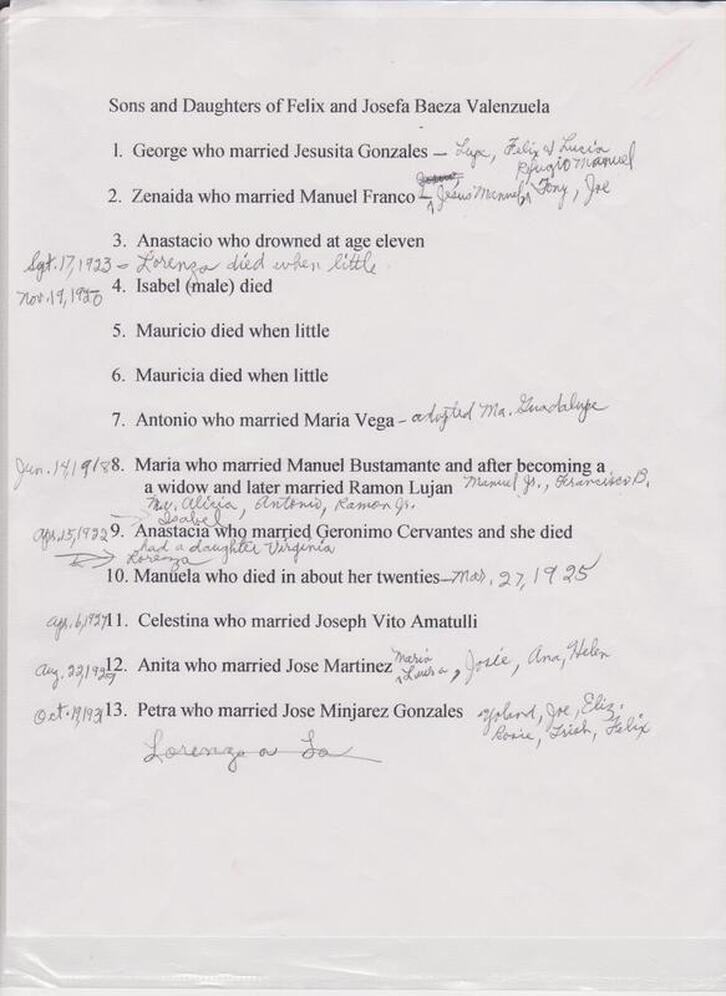 Their Story:  Felix was born in Julimes, Mexico in 22 Feb 1882 ten years before his wife, Josefa who was born in Redford, Texas. Felix's father and older siblings were born less than 15 miles away in San Pablo, Meoqui, Chihuahua, Mexico.  But his younger sibling Pedro was born in Shafter, Presidio County, Texas on June 29, 1888.

Josefa was born in Redford, Texas in 1892.  Josefa told her daughter, Celestina Amatulli, that when she was a small girl the family had moved to nearby Fort Leaton.  It is not clear why they moved there.  Fort Leaton had been used to protect families from Indian raids but it is not clear that by 1892 there was any such danger.

Felix Valenzuela had four mule wagons and over 30 mules according to Pat Ragsdale in his book Quicksilver: Terlingua and the Chisos Mining Company. There is a family picture taken in Terlingua showing Felix standing in front of a large number of mules.  Celestina Valenzuela, his daughter, said that those were his mules that he used to pull the mule trains.  We will add the photo once we locate it.
This is a picture of Terlingua freighters who were friends and hung out together.  The place where this photo was taken is not clear.  Some family members reported it as taken in 1919 in front of the home of Severiano Chavarría so this would be in the settlement two miles west of Castolón known as La Coyota. However, Bob Wirt thought that a more likely location might have been further north nearrer to where they ended (or started) their freight runs somewhere in Terlingua or possibly Study Butte.

There are family stories about connections between the Terlingua area freighters and a Terrazas.  Could it be Luis of Chihuahua, Chihuahua, Mexico who had extensive freight business from Chihuahuah to the United States' mid-west (Kansas?).  This needs more research.  You may find the following link of interest:  Luis Terrazas.﻿﻿ 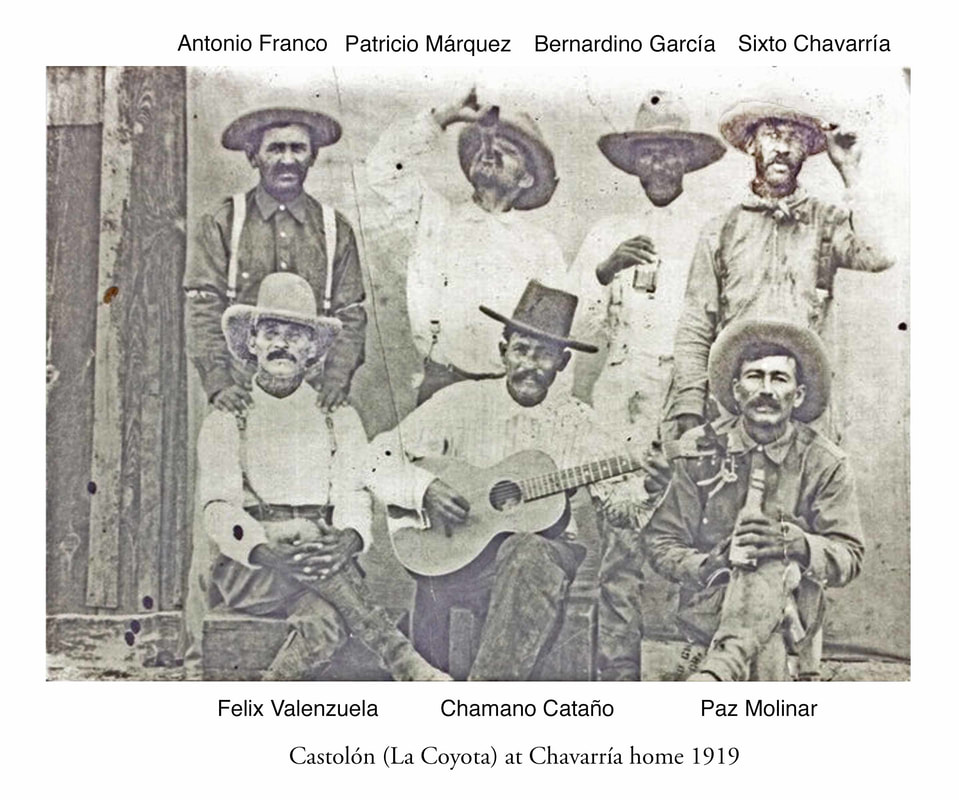 Note: Marcos Paredes, a Big Bend National Park Ranger, is responsible for getting Felix recognized at the Brewster County Courthouse too in addition to the monument in DC.
http://www.familiasdeterlingua.com/uploads/2/9/5/6/2956924/name_panel_for_felix_v_edited.jpg 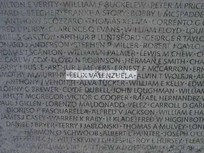 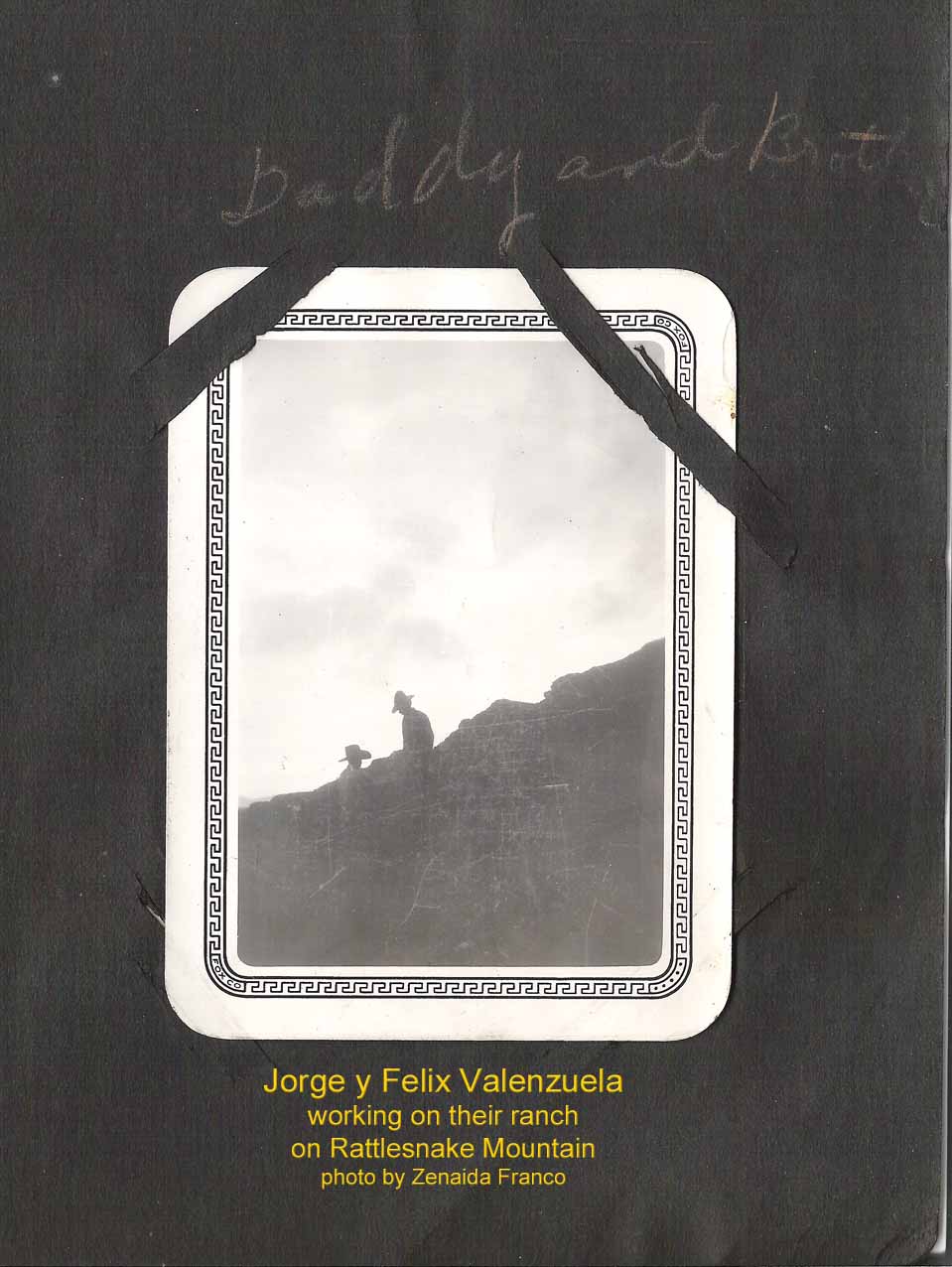 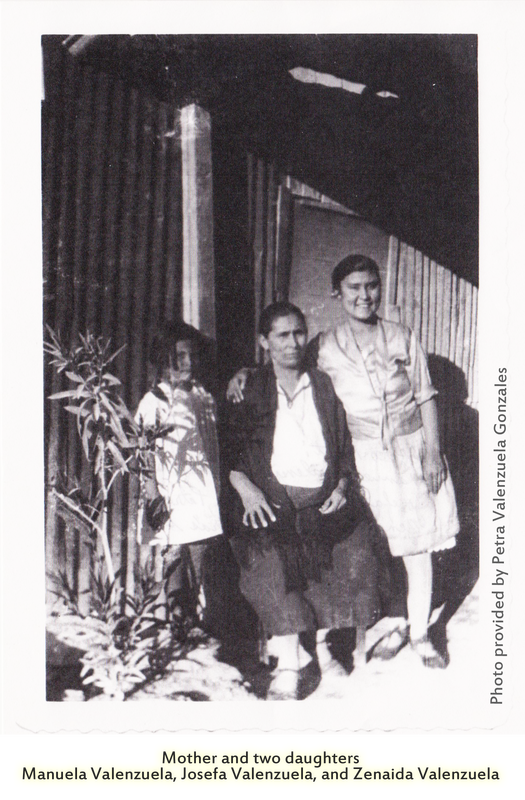 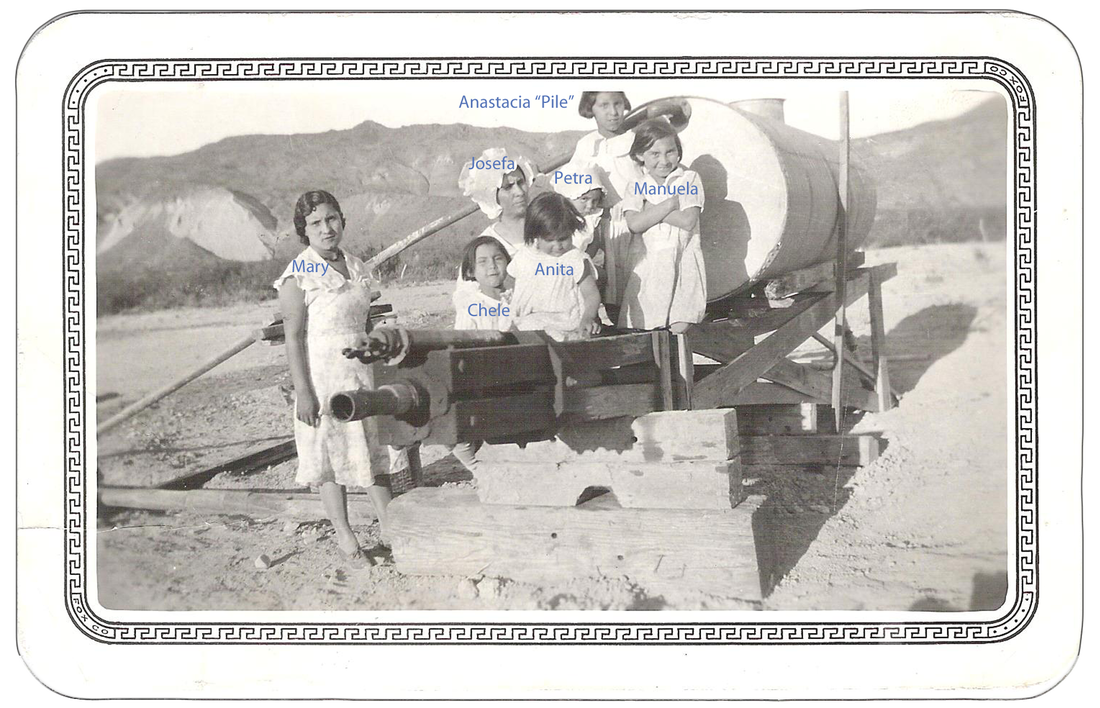 The Valenzuela women by the water tank for their vegetable garden at their ranch home, San Isidro.  They had a windmill to draw water from the ground.  But they would also divert the water from Willow Creek which flowed from east to west through their property after a rain. 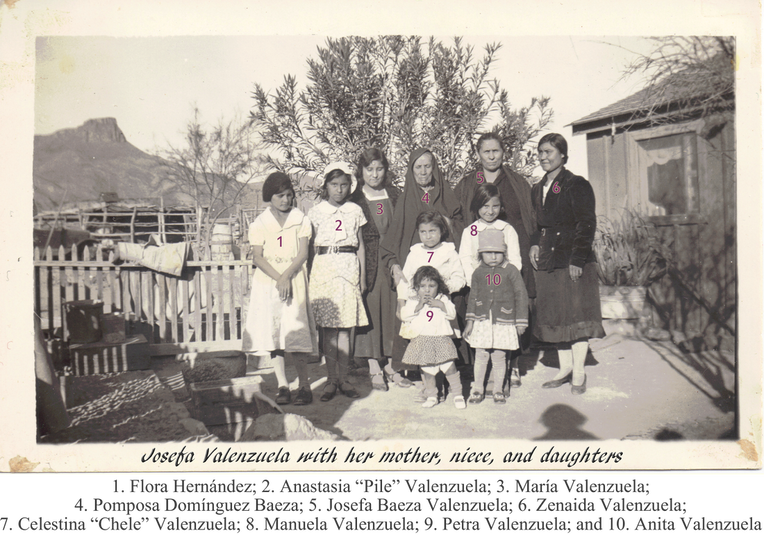 Flora, 1. above, went by "Florita."  Her mother was María Baeza sister of Josefa; so Flora was a first cousin of the Valenzuela children. 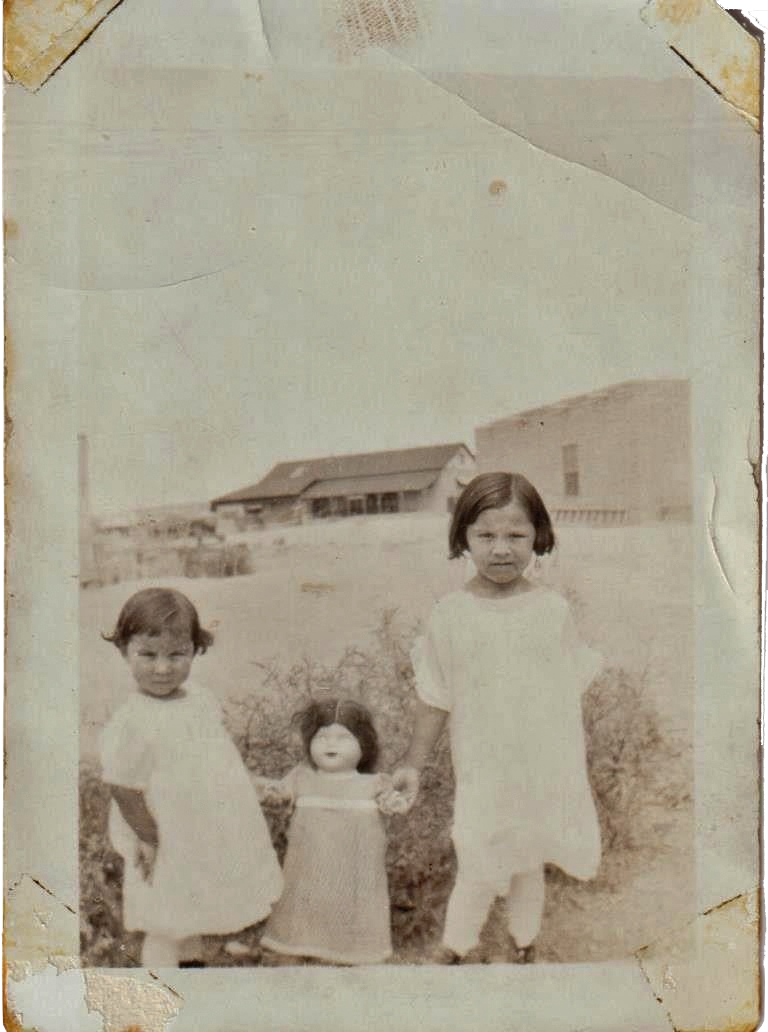 This photo was posted on the Familias de Terlingua Facebook page by Maria Luisa Franco Madrid on April 23, 2021 with the following caption: "Valenzuela sisters. this picture was given to Natividad Garcia by Zenaida Valenzuela. No names available."

Zenaida, the oldest of the Valenzuela girls, had a camera and used to take a lot of pictures around Terlingua.  She probably took this photo and the one above it.  Based on the photo above this one, it is possible that the two girls might be Anita on the left and Chele or Manuela on the right.  The photo appears to be taken at Terlingua, which they called "Chisos"  near their Terlingua home.  Their ranch home was about seven miles south of here by the northern edge of Rattlesnake Mountain.

The photo below probably taken in the late 1940s has Celestina, on the chair arm, Lucía on the floor, Josefa seated with Petra sitting on the other arm of the chair.  The chair had a companion sofa.  They were upholstered in a beautiful red velveteen cloth. This was in their Alpine home. 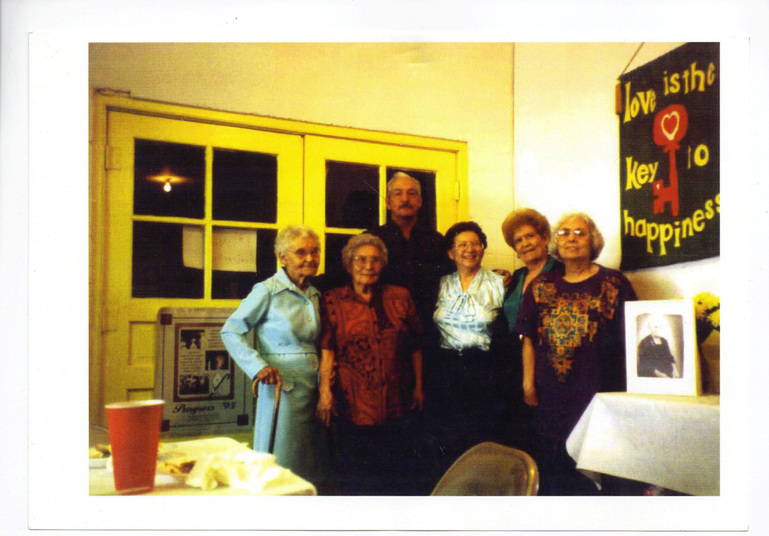 The two photos above and the one on the left below are of the ruins of the house where the Felix Valenzuela family lived.  You can see the erosion of the near wall.  the photo on the left was taken in 2011, the one on the right in the 1990's.

Felix would at times have to incarcerate law breakers.  They lived almost directly across from the jail which still stands next to the Starlight Theater.  Josefa Baeza Valenzuela would prepare the meals for those incarcerated. 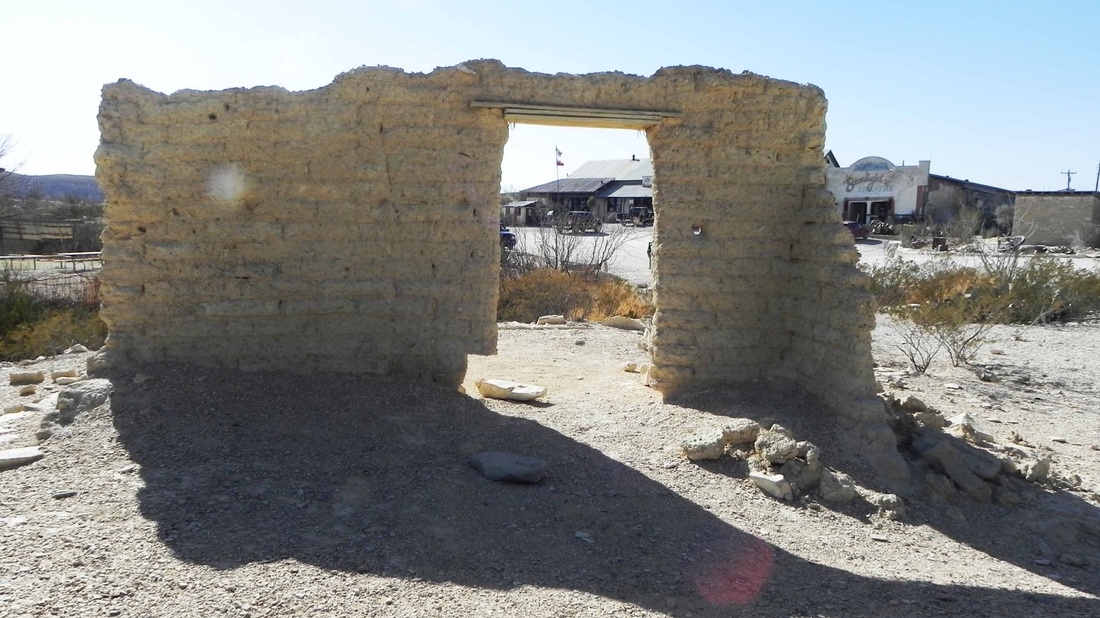 The family lived in this house in town (known as Chisos or Terlingua) during the school year so the children could go to school.  But on weekends and summers they lived in the ranch home
See map of San Isidro Ranch 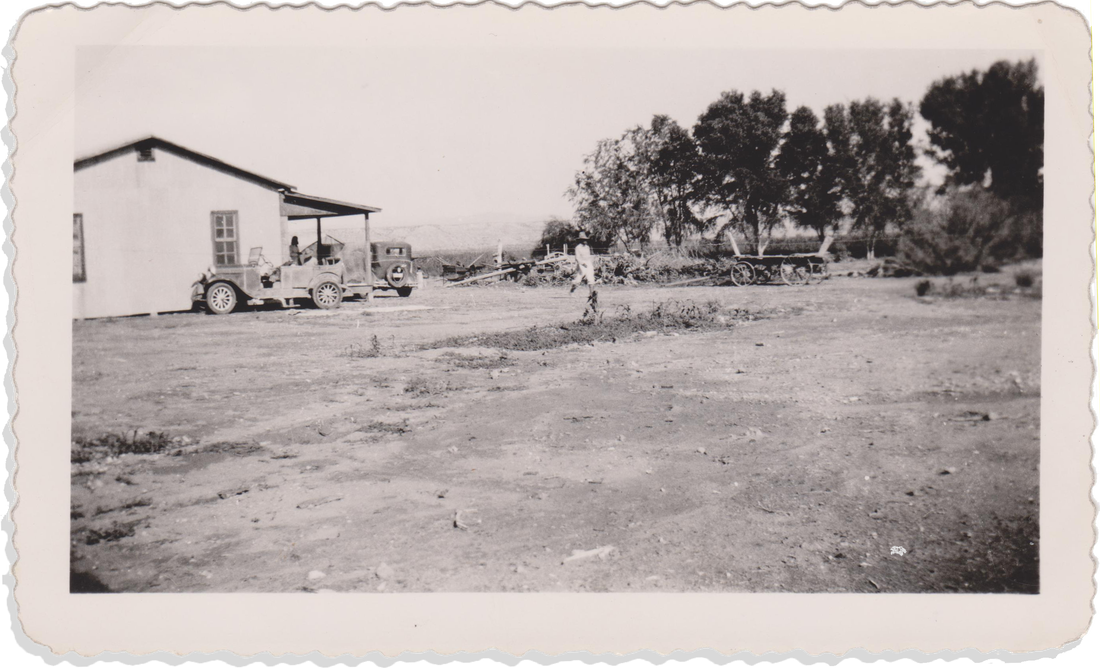 Celestina Valenzuela Amatulli provided this photo and said this is her father Felix.
This view of the house is from the east side looking west. 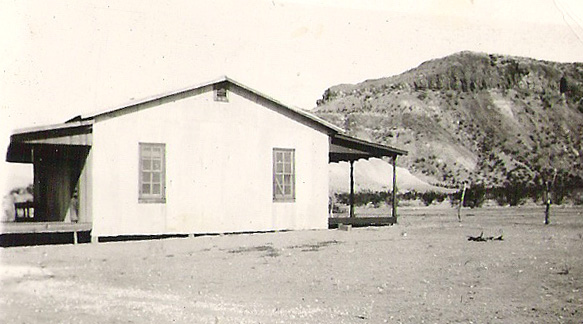 Felix Valenzuela had a home south of Terlingua which he called Rancho San Isidro.  San Isidro was the patron saint of farmers.  They raised cattle and raised some crops watered by Willow Creek.  Their ranch home was located at 29.265020, -103.557030.
This photo shows the west side of the home with part of the northern edge of Rattlesnake Mountain looming behind it.  Later a tree grew right next to this side of the house and eventually over the decades by the time it was owned by Ken Barnes the tree started to topple down the home.  Today there are no walls left but the tree is huge looming over the floors still in place and can be seen in Google Maps.
Photos of the family 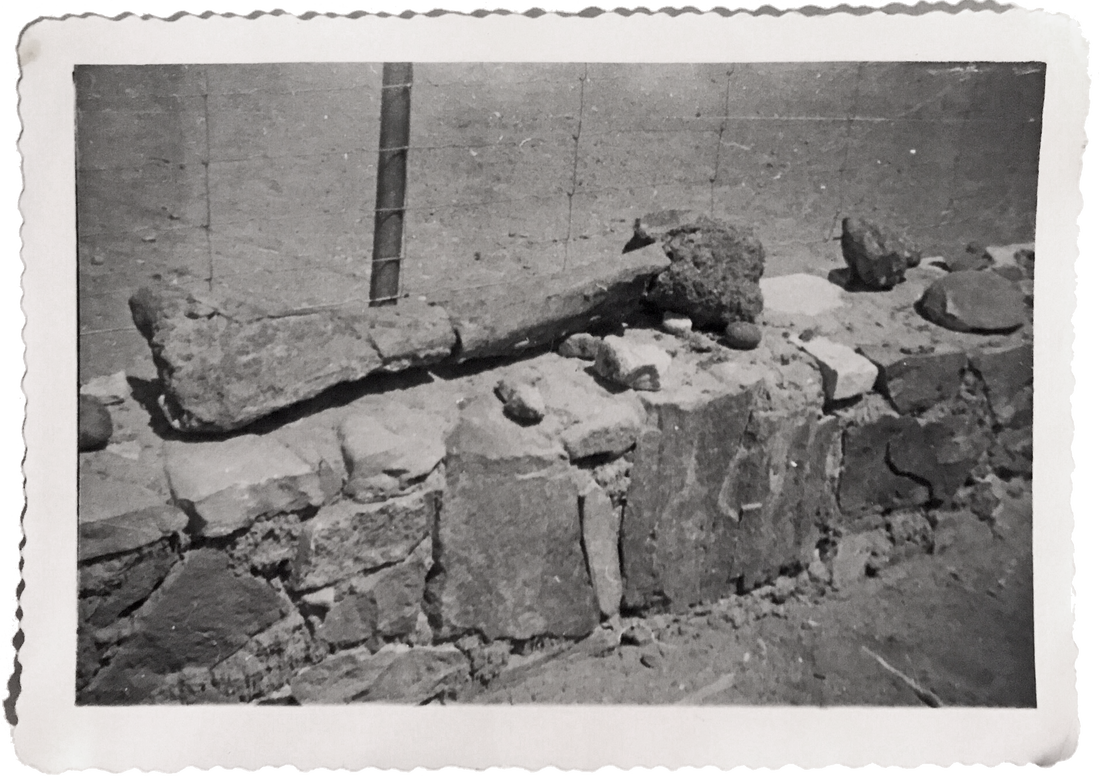 Chele provided this photo of a dinosaur bone fossil was found in the area and
was on display for a while at their ranch.  Sometime in the mid 1950's it was stolen.

View Larger Map
Celestina Valenzuela Amatulli provided most of the photographs on this page with exceptions noted.
Petra Gonzales and Celestina Amatulli provided most of the information.  Steven Franco provided the death certificate for Anastacia.
Bob Wirt provided the information about Fort Leaton, Antonio Valenzuela, and María Vega.
This page was updated on July 04, 2014.  Updated April 29, 2021 with photo of Valenzuela girls provided by Maria Luisa Franco Madrid.
Updated June 27, 2022 with the portrait of Felix Valenzuela at the top left of page enhanced and provided by  by Oscar Hinojos.
Last Updated December 27 with new portrait of Josefa and Josefa's translated Baptismal record.
Click here to go to the Baeza Family Discussion.