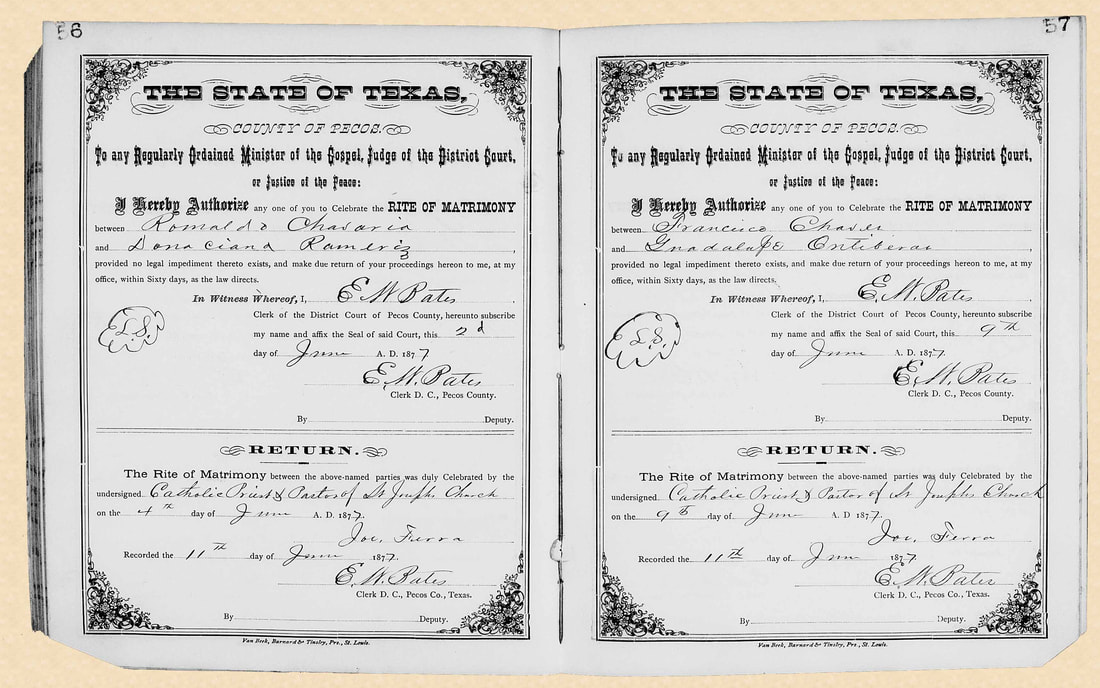 B. Eulalia Chavarria, daughter
born in 1880 in Fort Stockton.

C. Guadalupe Chavarria, son, was born December 12, 1895 in Mexico.
He lived in Fort Stockton from 1910 to 1975,  where he worked as a ranch laborer.
He died of a stroke on December 5, 1974 in Fort Stockton Memorial Hospital.
He is buried in Saint Joseph’s Catholic Cemetery, Fort Stockton.
The Romaldo Chavarría Family Story:

Romaldo and his brother Severiano married two Ramírez sisters, Donaciana and Rita respectively.  Donaciana was born in Mexico and Rita was born in Presidio, Texas.  So Luis Ramírez and his wife Dominga Leyva Ramírez must have immigrated into the United States between their births.  There is a big range in Rita's birthdate that is discussed by Bob Wirt at the bottom of Rita's parents page.  Note that the birthdate on her death certificate is almost exactly the birthdate given for her older sister, Donaciana.  This matters only in trying to determine when the family moved from Mexico to Texas since it was between their births.
Research Notes:
1. Resolve duplicate records for Romaldo KCYJ-QZM ​ and M4R2-FFN ​
2. Does anyone know where Donaciana is buried? She is probably buried in the same cemetery as her sister Rita, St. Joseph's Cenmetery in Fort Stockton.  If she is there I wonder if anyone knows which plot she is in.
Chavarria Family Discussion
The information on this page was provided by Bob Wirt in emails and from his website, Life Before the Ruins,
This page had some updates on March 3, 2014.
Additional research and updates on June 21, 2020.