Luis Ramírez (age 21 or ca.17?) married Dominga Leyva (age ca.13?)
22 October 1847
in Jesús Nazareno church in Ojinaga, Chihuahua, Mexico
They immigrated around 1860
They had eleven children:
Note: Romaldo Chavarría and Severiano Chavarría were brothers.
They married two sisters Donaciana Ramírez and Rita Ramírez respectively.
Three Flags Over Luis Ramírez
On August 24, 1821Spanish Rule ended in Mexico -- four years before Luis was born.
Luis Ramírez was born in Texas about 1825 when Texas was still part of Mexico.  He was about eleven years old when the Texas Declaration of Independence  was signed on March 2, 1836.  The Texas Revolution ended on April 21, 1836.    Luis was about twenty years old, when Texas became part of the United States on 29 Dec 1845.  But at that time Texas did not include what is today west Texas. 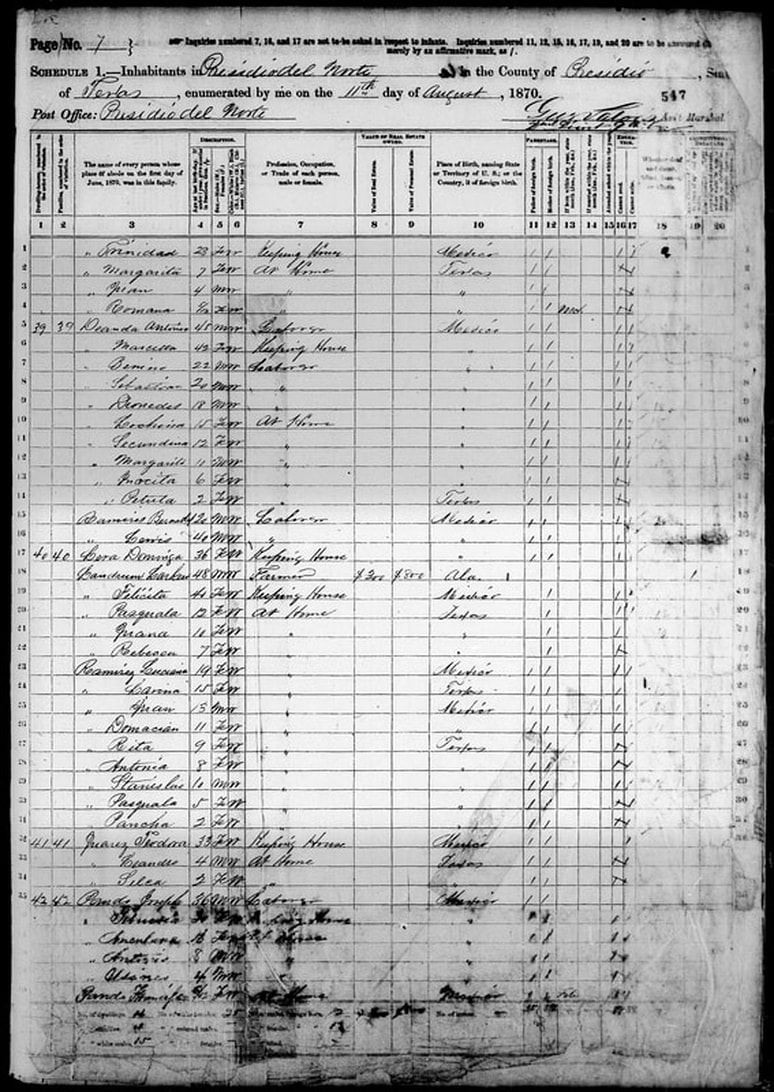 The 1870 US Census for Presidio Del Norte in Presidio County
https://www.familysearch.org/ark:/61903/3:1:S3HT-69YT-N5?i=6&cc=1438024&personaUrl=%2Fark%3A%2F61903%2F1%3A1%3AMXGH-HB2
Research Notes and Questions
*Rita's death certificate shows her birth as 22 May 1859. The following is from Bob Wirt's research:
The 1870 Census indicates that Luis and his wife Dominga were born in Texas but this might not be true.  They are also said to have immigrated to Presidio Texas between the birth of their 7th child Donaciana and their 8th child Rita.
"For sure I descend from one branch. I descend from Estanislao Ramírez Leyva the son of Luis Ramirez and Dominga Leyva.
He is missing from your website.
Luis Ramirez father of
Estanislado Ramirez father of
Estanislada Ramirez (wife of Yrineo Montoya) mother of Ricardo Montoya (husband of Eladia Flotte)
father of Maria Montoya
mother of Maria Sabinas
mother of Obed Estrada (ME)."
The following is from FamilySearch at www.familysearch.org/tree/person/details/KLY7-4P6
Image 7 of 12 from the 1870 US Census for Presidio del Norte in Presidio County shows the family from lines 16 to 31.  There is an interesting question on how the census enumerator entered the Luis Ramírez household into the census sheet.  They lived in household 40 which is shown on line 17 (Dominga Leyva) but the family starts earlier on line 15 (Bernabe Ramirez). So Bernabe and his father Luis Ramirez (line 16) are shown outside the household.  Even more curious is that inside their household (40) there is a Larken Landrum and his wife and several of their children.  In fact, Landrum is the only person on the sheet that shows he owns real estate ($300).  It leaves a lot of questions as to whether this reflects the reality or if the Ramirez family lived with the Landrum family. 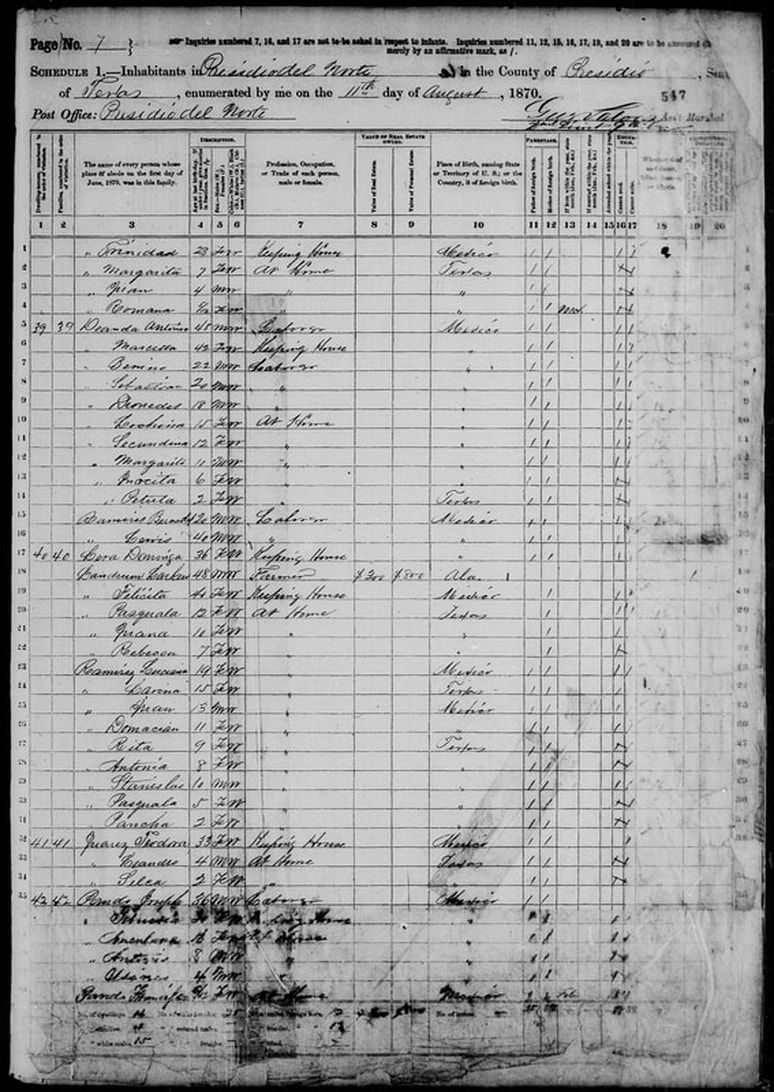