birth dates for both from 1900 US Census which shows month and year.
Francisco Franco married Juana Molinar circa 1877
1900 US Census estimates year of marriage as 1885
Their Children:

3. José born 16 Sep 1886** in Texas; lived and buried in El Paso
There are errors in the familysearch.com tree for sons named Juan/Jose

"My name is Juana Molinar Franco.  It's so nice to meet you. I’m happy for this opportunity to tell you a bit about my family and myself.

"Our Molinar family comes from the Basque Country of Spain.  Domingo Molinar, my 5th great grandfather like his father and grandfather before him was born in Gordexola, Vizcaya, Spain.  They were baptized in Gordexola's church San Juan de Molinar.

"Domingo Molinar crossed the Atlantic to Nueva Vizcaya; and around 1610 his son Cosme Molinar was born in Allende, Chihuahua, the first Molinar born in the New World. Cosme was about ten years old in Chihuahua when the Pilgrims landed in the Mayflower on the shores of the New World.

"My father Vicente Muñoz Molinar was born in 1809, in Chihuahua. My mother Petra Baeza Carrasco was born in 1824, in Ojinaga.
I had 9 brothers and sisters: Dolores, Mariano, Victoriano, Juan, Atilano, Silverio, Carmen, Esteban and Petra. Isn't that incredible?

"I took Francisco Ramos Franco, the love of my life, to be my husband. He was born in 1849, in Mexico.  Francisco immigrated into Texas in 1879; and I immigrated two years later.  We had 8 amazing children: a daughter Cruz who died as a child, Antonio, Juan, Jose, Jesús, María, Vicente, Francisco. We lived in Presidio County Texas where I was a housewife.

"Francisco and I had 12 wonderful grandchildren from our son Antonio and his wife Valentina. We had Benigno, Manuel, 1st Roman who died as a child of a ruptured appendix, Secundino who drowned as a teenager, Juana, Isabel, Rita, the 2d. Roman, Florentino, Simon, Antonio who only lived 5 months, and Alejandra.

"I'm glad I could share my deep story with you. Thank you for watching. Goodbye." 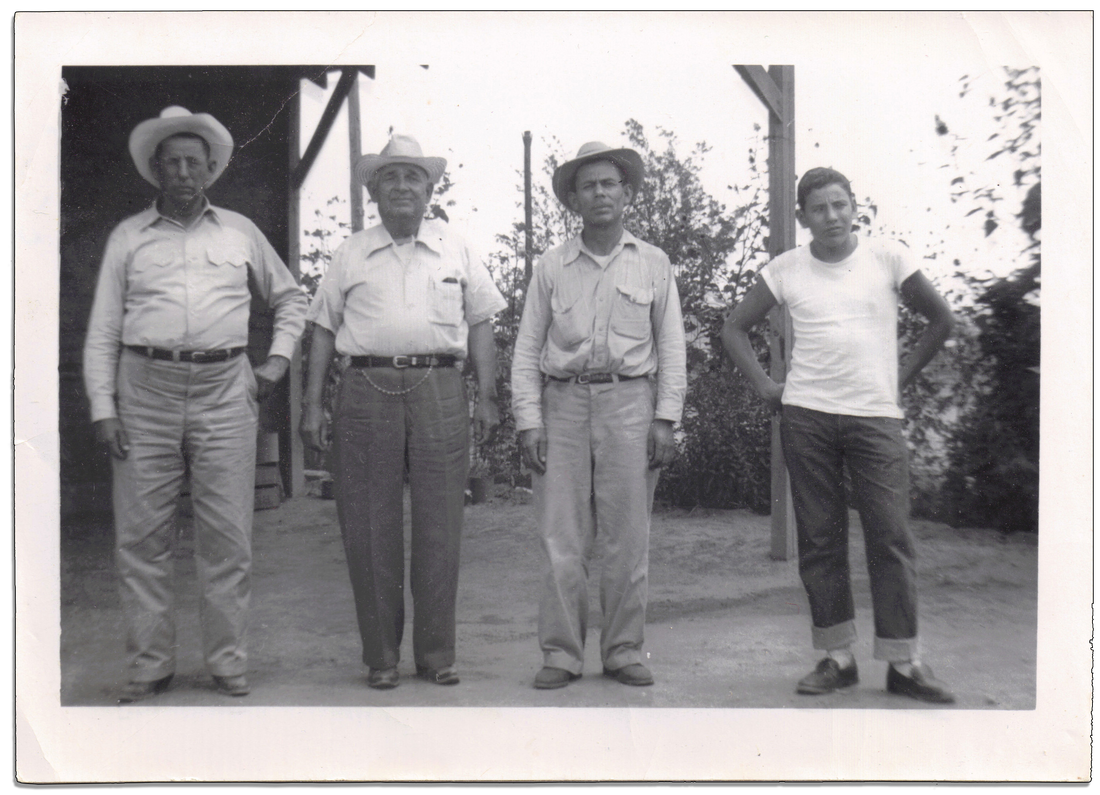 Manuel's tíos José & Juan Franco, Manuel Franco, and cousin Carlos Franco son of José
about 1950 at Manuel's home in Alpine, Texas.  Photo taken by Zenaida Franco
The Francisco Franco Family Story:
Francisco Franco was born in Mexico in 1848.  Juana was born in Mexico in 1863.  According to the 1900 US Census he immigrated in 1879.  Juana immigrated in a couple of years later in 1881.  The 1880 US Census shows Francisco, his wife Juana and their infant daughter Cruz living in the household of Rancho del Alamo near Presidio, Texas with .
The Francisco Franco story is being written and will be updated here.  Please check back later.

Francisco Franco is believed to have moved to "San Antonio" in his later years. It does not appear that he moved to San Antonio, Bexar County, Texas.  We found two San Antonios that seem possible where he might have gone.  First is San Antonio del Bravo across the Rio Grande from Candelaria.  This is very likely since family members reported having seen him in the area.
https://goo.gl/maps/vey3grV6g7K6SeYB7
The other San Antonio lies in the municipality of Meoqui which is about a four hour drive south of Chihuahua City by federal highway 45.  The following map has it indicated indicated by the lower red arrow. 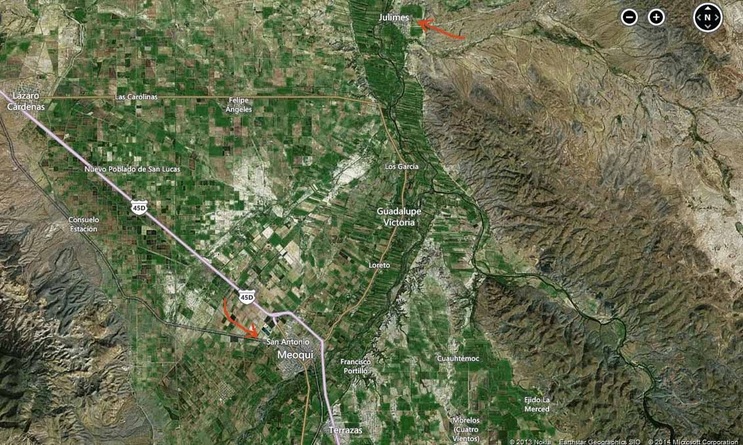 San Antonio Meoqui is where the Francos were before they went to the Terlingua area so maybe Francisco Franco went back there.
Franco Family Discussion
Research Notes:
https://www.geni.com/inconsistencies/for_profile/6000000097902502905 Francisco Franco inconsistency

Missing child?  This information from a baptismal record indicates that there is some problem with the info about the other children.  Either their dates are wrong or this is a new child that died in early infancy or a confusion with another child.  Need to find this original baptismal record and see if that helps start work on a resolution. Here is the baptismal info:
Page 47, entry 151: I Father José Hoban
baptized on February 26, 1873 José Juan Franco
born February 8, 1873, legitimate son of Francisco Franco and Juana Molinar,
paternal grand parents Atanacio Franco and Teodosa Ramos,
maternal grandparents (blank space) Molinar and Petra Carrasco,
godparents Buena Bentura Alarcón and Consuelo Mendias.
For the animated DeepStory go to https://www.myheritage.com/deepstory/result/1347899852-1?deepstory_origin=lobby&is_new_deepstory=1#
Louisa Madrid provided the information on this page and obtained the photograph of Juana from Socorro in Midland Texas.
Additional information was provided by Bob Wirt. Link to Life Before the Ruins to read more and by research by Antonio S. Franco.
US 1880 Census is at  1880_us_census_record-image_33sq-gybp-jvq.jpg
Go to the Franco Family Discussion page by clicking here.
This page updated November 20, 2017. This page updated March 8, 2020. This page last updated May 19, 2020.
This page last updated July1, 2022 with Juana telling her story.