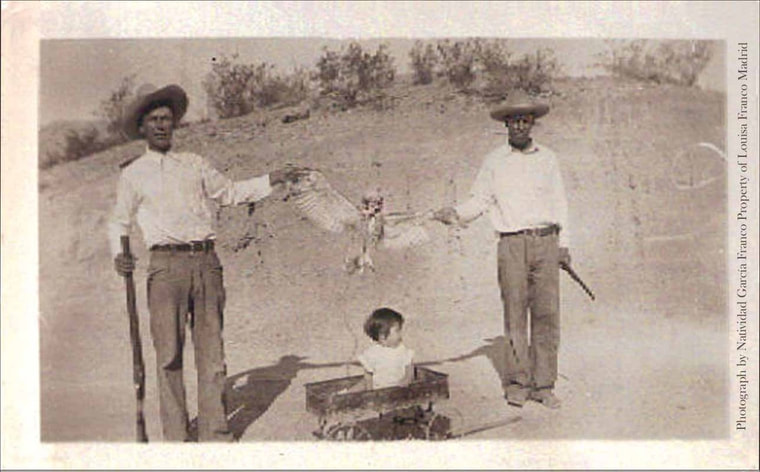 Benigno Franco, lechuza, Gregorio Garcia,
and baby Louisa, the author of this story
click on photo to enlarge it
Reading Tales of the Big Bend reminded me of this picture. I always have a good laugh, remembering my mother telling me about this picture.

My mother Natividad  said there were a lot of lechuzas [barn owls] where they lived. She said they hated the noise they made which sounded as if they were laughing; and at night when they had the lights on in the house, the lechuzas would bump against the door or windows.
People told stories that they were witches, but either my grandfather, and especially not my grandmother, believed in any tales about witches, and spells. They would tell people who told such stories that believing such nonsense gave the devil more power. They were very devout Catholics, and prayer was a big part of their life.

Nonetheless, the girls were still afraid when they heard of curses and hechicería [witchcraft] in general.  My mother told me that when my grandfather was dying and they were all praying through the night with him, the lechuzas were making a lot of noise.  My mother said it was eerie.

After he died, this woman told my grandmother, “If you had dug out the clothes that someone has buried in the goats’ corral, your husband would not have died.” My grandmother got angry and told her there was no one would have done such a thing.  I asked my mother “did you go and check to see if there was anything buried there?”  She said of course not.

My uncle Gregorio was always making fun of such things; but when a lechuza was caught in a trap, he took it by its legs, put a gun to its head and asked it, “Are you a witch? Are you responsible for my father's death? Speak up or you are going to die.” Mama said the poor bird just blinked its eyes. Gregorio said, “Well, we’ll soon know if it turns into a person.”  He killed the bird and it was clear to all that all it was just a lechuza.

My mother had to record this with her camera.  She wrote on the back of the picture “Benigno, lechuza, Gregorio and la niña Luisita 1933.”
_Natividad García Franco, took the photograph and told the story to Louisa F. Madrid
Copyright © 2011 by Louisa Franco Madrid all rights reserved.
Back to Our Stories  |  Natividad Franco  |  Discuss the Story