Martín Peña married Manuela Prieto
Their children:
1. Juan
2. Martín Jr.
3. Luis  (he settled in Barstow TX, see his family site here)
4. Demitrio
Martín arrived from Mexico in Fort Stockton as a widower with his only son Luis. Want to know more? Click here to read his story as told by Juan-Paz Peña.
Notes on Martin Penia

Note:  He has the highest number of acres farmed, largest number of cows, and largest harvest on the list.  Out of 10 listed on first page, 8 farm 6 acres and one farms 8.  He is the only one with 12 acres.  Closest to him in wages paid is $30.  No one else has cows or swine or other animals. On second page, Perfector Duarte also has 12 acres but was only paid $30 in wages in 1879 and his estimated value of all farm productions for 1879 was $90.  No one has farm animals and everyone has crops of Indian corn.
copyright © 2010 Imelda Gallego 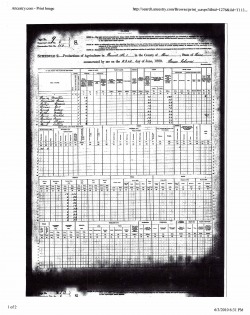 1880 Agriculture Census Record
Click on image to enlarge it.
The information on this page was corrected July 13, 2010 with information provided by Juan-Paz Peña.