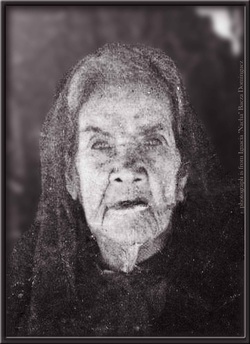 Marcelo Baeza married Luciana Ramírez
They had eleven children:
Sometime between the births of Candelario and Victoria the family left Ft. Stockton, Texas
It is likely they moved to an area near Castolón, Texas. Did they also go to La Coyota like Rita Ramirez and her husband Severiano Chavarria?
Their Story: Luciana had two younger sisters Rita and Donaciana who married two Chavarría brothers, Romaldo and Severiano  in Fort Stockton, Texas.

Rita, though about nine years younger married first in 1977.

Marcelo and Luciana had their first five children while they were living in the Fort Stockton area, where Marcelo was working as a farmer.  So in March of1880 when their daughter Concepción was born, they were still living in Fort Stockton.

Sometime before their next child was born, the family moved away -- probably to the Santa Helena, Mexico area which is about two miles from Castolon, TX.  It may be worthwhile noting that Castolón was originally known as Santa Elena, but when they applied to get a post office with that name they were told there was already a Santa Elena, TX which is hundreds of miles away in the Rio Grande Valley near McAllen, Texas so they named it Castolón - probably for El Castellon the large mountain that rises nearby.

Luciana was the third-born child of Luis Ramírez and his wife Dominga Leyva. Luciana's younger sister, eighth-born Rita Ramírez, was married in Fort Stockton and also lived in Fort Stockton when her first four children were born.
The Marcelo Baeza Family Photo Album
Click on any of the photos on this page to enlarge them.

The wonderful photograph of Luciana is from Ignacia "Nacha" Baeza Dominguez and was sent by Elizabeth Marquez to Bob Wirt at Life Before the Ruins who made it available to us.  Pablo's photo was from Santos "Blocker" B. Villalba, Jr.  Candelario's photo was from Albina B. Gonzalez.  Fernando's photo was supplied by Juanita B. Marquez.  Juan's photo was from Inez Baeza.  We are very grateful to have these photos in Familias de Terlingua.

I have some information that I have found through research and some from stories my grandmother shared with me. Candelario would be my great grandfather.