Note: based on new information and many more photos from Ismael Martinez Dominguez
this page is undergoing modifications.  We are also adding new pages such as for Policarpio Dominguez and Eugenio Dominguez. It will take a while to complete all this work so be patient with us and check back regularly to see the progress.
Anastacio Gambóa married Victoria Baeza
Anastacio and Victoria had four children: 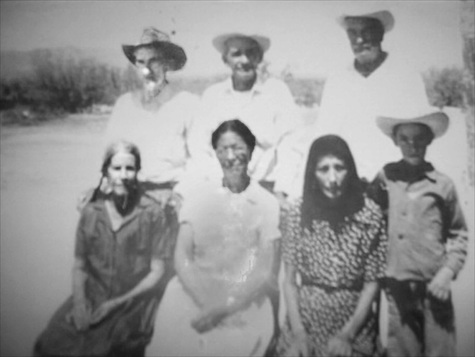 Victoria Baeza Gambóa Domínguez is sitting on the left and her second husband Felix Domínguez is behind her.
Genealogical Resources: https://familysearch.org/ark:/61903/3:1:S3HT-DHG3-CJB?i=1&cc=1307314

The information on this page was provided by Bob Wirt from his Documented Research Report "The Bernardino Gamboa Family History" published on Bob Wirt's Web site Life Before the Ruins with input photos from the Gambóa family and from Ismael Martinez Dominguez.
This page was last updated 08/13/2017.