2. Agripina Burges Molinar, daughter, was born in Terlingua on 22 Jun 1909. She was baptized in "Bigbend" (Study Butte) on 2 Nov 1909. Her godmother was Josefa Baeza. She died of pneumonia in Terlingua on 31 Mar 1942 and is buried in the Terlingua Cemetery. Her grave is marked.

3. María Molinar, daughter, was born in Terlingua circa 1913. She married Cornelio Betancourt. She died in Odessa in 1984.

4. Tomás Molinar, son, was born in Terlingua 29 Apr 1918. He died in Odessa on 1 Apr 1964 and is buried in the Odessa Cemetery. He married Jesus Gomez, born circa 1917, the daughter of Felix Gomez and Benigna Galindo. They had five children.

7. Guillermo Molinar, son, was born circa 1922 in Terlingua. He married Barbara Vega. She was born in Terlingua circa 1922, the daughter of Isabel Vega and Julia Rivas. They had two children.

8. Alfonso Molinar, son, was born on September 10, 1924 in Terlingua. He married Maria Zamarron. She was born in Terlingua 23 Nov 1923, the daughter of Martin Zamarron and Dolores Huerta. They had three children. Alfonso and Maria were divorced in 1947.

9. Rogelio Molinar, son, was born circa 1926 in Terlingua. He married Maria Betancourt, daughter of Miguel Betancourt and Felipa Pichardo. Maria died 5 Dec 1998 at her residence in Odessa and is buried in the Rose Hill Cemetery, Odessa. Rogelio and Maria had five children.

10. Alejandro Molinar, son, born 9 Feb 1929 in Terlingua. He died in Terlingua 18 Feb 1934 and is buried in the Molinar Ranch Cemetery along Terlingua Creek. His grave is marked.

11. Ernestina Molinar, daughter, was born 19 Mar 1932 in Brewster County.  Ernestina, married Roman Arispe and had three children. The two surviving children are Armando & Belinda. After Roman's death, Ernestina married Jesus Hernandez. They have three children Doris, Jesus aka JJ, & Elaine. They all live in Devine, TX.
The Story:
Paz Molinar made a living by raising cattle and goats, farming, and engaging in the freight business.  This 2007 photograph shows the ruins of the Paz Molinar home.  The Web site "Life Before the Ruins" has an interesting account of Paz' story and details of some of his transactions with his freight business.  We recommend you read Bob Wirt's report here.

The Molinar family ascends all the way back to the Benito Molinar born in 1490 in Gordejuela, Basque Country, Spain, so Paz Molinar's descendants are part of that family.  Paz Molinar married María Carnero Burgess and their descendants ascend through her to the Cayetano Lujan land grant family of el Polvo and even further back to Conquistador Cristoval de Vaderrama born who was one of the conquerers of 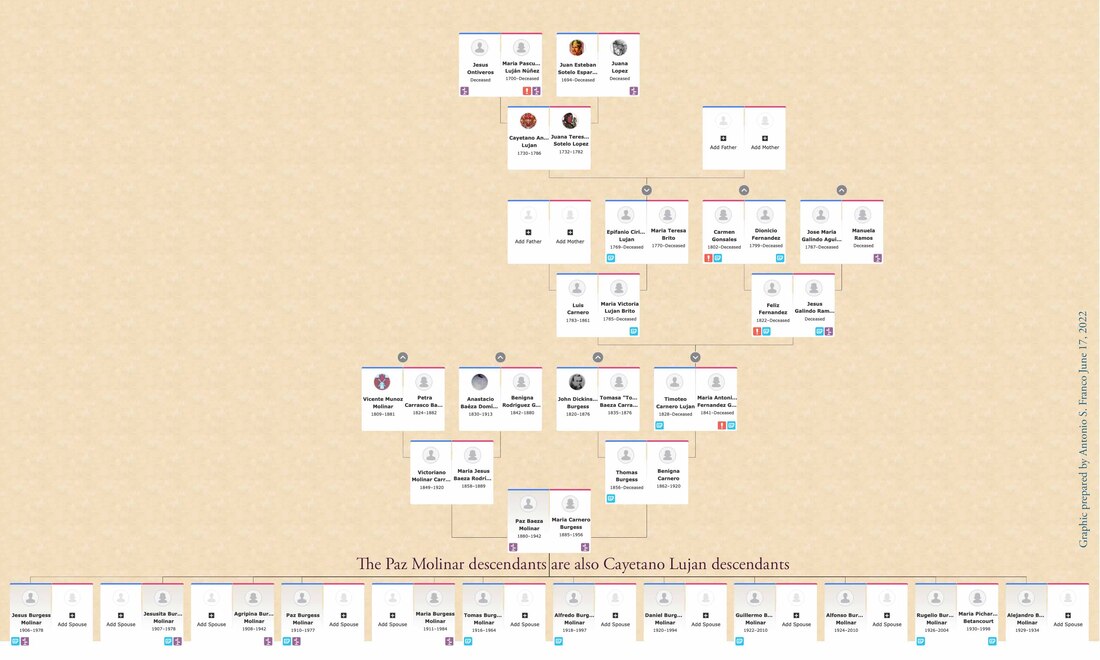 1930 Us Census https://www.familysearch.org/ark:/61903/3:1:33SQ-GRZR-98MY?i=13&cc=1810731
You can send us text information and files (20 megs maximum).
Note: after you submit the form you will get a message here that your input was sent and
you need to refresh your browser page to see the form again if you want to send more files.
This page was created largely from the Documented Research report by Bob Wirt published in Life Before the Ruins
with additional input from Maria Luisa Franco Madrid and Antonio S. Franco.
This page had minor updates November 19, 2017.   This page was updated January 3, 2021.
This page added ascendancy to Cayetano Lujan on June 17, 2022.